Female Tommies: The Frontline Women of the First World War 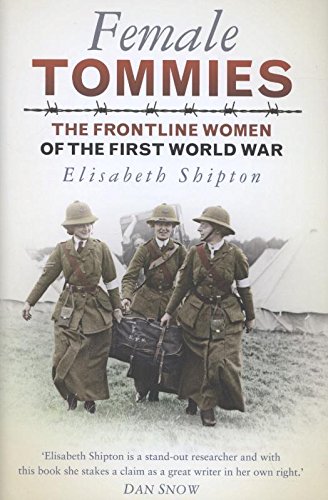 “Whenever there was a debate about the proper role of women in wartime, the argument kept coming back to the principle that women were life-givers, not life-takers.”

Lofty words, high-minded even, and while government and society came to accept—however reluctantly—that one solution to the shortage of manpower (man-power) was to militarize women, male chauvinism is a weed that’s hard to kill.

It would be tempting to turn the pages of this book with a growing sense of exuberance: surely the heroic accomplishments made by women on the home front and on the actual front during the horror that was WWI would give them not only a place but a place of honor at the table—the table at which gender parity, equity, and good will among wo/men are settled.

A hundred years after the events in this book, gender—or race—equality has still not fully come to pass, not in the everyday civilian world of wages and careers and certainly not in the military. Worse, already while an awareness of their enormous contributions to the war effort was still fresh on everyone’s mind, women returning from the war were blasted for taking jobs away from men, highly skilled female medical personnel could not find employment at levels commensurate with their experience, and all sorts of other social and moral injustices eroded whatever advances had been made! Worse, the US War Department took sixty years to actually issue the women their discharge papers and accord them veteran status.

Written by a British military historian—a discipline that itself is seriously male-dominated—the book considers in the main the British experience but includes other combatants where relevant, especially those that allowed women in combat service.

Told against the backdrop of the suffrage movements in various parts of the world (recall that at the beginning of the 19th century women drivers could be ticketed for wearing pants!) Shipton makes a great effort in the beginning of the book to help today’s reader appreciate the political dimension of accepting women into the military: it would have given them the vote (“Men were seen to qualify for the vote as they were eligible to fight for their country, which entitled them to national citizenship.”).

Shipton has found joy in working in archives since the tender age of 16 and made a professional life of it, tending to the regimental archives of the Soldiers of Oxfordshire and the Royal Green Jackets, being a researcher on TV documentaries, and as a military historian for the BBC. Her ability to ferret out material and then package it in a relatable, cohesive way is fully in play in this fine book. Readable as it is, it requires effort and concentration of the reader, especially the background bits without which the subsequent “case studies” of individual women’s lives would be little more than human interest stories without a common thread.

The book charts the progression of amateur volunteer services developing into professional non-military organizations offering adjunct services such as ambulance drivers and nurses or journalists and code-crackers. Two years into the war, most of these became branches of the professional military (hence the term “militarized women”). Also discussed are war-related activities such as resistance and espionage. A chapter entitled “Flora Sandes” revolves around this British women (b. 1876) who famously traded her wimpole for hand to hand combat in the Serbian Army but weaves many, many other individuals and events into a complex tale of determination and, occasionally, naiveté.

A handful of evocative b/w photos help make the story personal and one maps shows the Western Front in 1914. Detailed Chapter Notes offer additional detail and enumerate sources used, many of which written and spoken first-hand recollections. Thorough Bibliography and Index.

While there are stacks of individual biographies, a big-picture treatment such as Shipton presents here is absolutely essential for overall context and big trends in society as a whole.

Female Tommies: The Frontline Women of the First World War