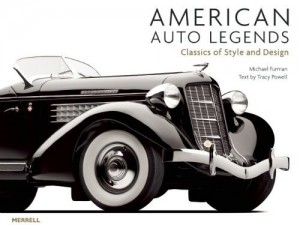 This latest installment in this publisher’s Auto Legends series turns its—and your—gaze upon American cars of “distinction.” Without taking anything away from the text, what most distinguishes all the books in this series is the fabulous photography, Michel Zumbrunn’s in the earlier ones and Michael Furman’s here. In terms of text this latest book is in fact rather satisfying, especially the 20-page Introduction that manages to dispense with over 100 years of automobile history in the US without turning it into a hopeless tangle. From the origins of the industry in the bicycle and horse-drawn carriage days to today’s US-made foreign nameplates, author Powell ticks off all the relevant talking points that address what makes American cars and car making in America different from anywhere else.

Two significant items that are dealt with all too peripherally are recommended to the reader’s attention for further study: the unimaginably dismal state of roads in the early days, especially when compared to pretty much anywhere else in the industrialized world; and the fact that nowadays it is corporate fuel averages that first and foremost drives manufacturers to produce micro cars whether they want to or not.

The 54 featured cars range from 1903 to 2008 and are shown in chronological order. Each is described with one page of text pertaining to the marque and the specific model, and one to five pages of captioned photos. The cars are from museum and private collections; understandably, their location and ownership are not disclosed. Also not disclosed are the selection criteria. It should be noted that it was the publisher who had “final cut,” not Furman. It wouldn’t stretch the imagination too much to wonder if a British publisher, which Merrell is, has a different take on American cars? Many of the de rigeur names you’d expect are here, and a few you probably don’t. The book jacket describes the cars included as the “most iconic . . . ever produced.” The danger in making such pronouncements for the sole purpose of having a catchy one-liner is that the reader will struggle to grasp in what way, say, a 1995 Oldsmobile Aurora so singularly advanced the state of American automobile-making that it deserves pride of place here over other cars. Powell, a Managing Editor at Automobile Quarterly and an expert on American automotive history, surely knows his topic well enough to make such judgment calls but he or the publisher’s editor probably could have done a better job of sharing their thinking with the reader.

The photos, on the other hand, require no thinking although they will yield much more if you do! Michael Furman developed a love of photography early on and now has three decades of professional work under his belt, along with an impressive catalog of books some of which he publishes himself. The unhurried observer will note his enormous attention to detail. For instance, in all shots each wheel has been individually turned so that logos on wheel hubs/hub caps are all right side up. If you have photographic inclinations yourself, examine the lighting in Furman’s photos and, if you can, picture alternate versions in your mind (i.e. what might you have done?). The point here being that the lighting is different from car to car. You will come to appreciate that light and shadow not only [a] have their place but even under the artificial conditions of controlled studio photography are a comprise, and [b] that it does not only take technical photographic skill but an understanding of each subject’s essential attributes to sensibly decide what to play up.

From hard shiny chrome to soft wool, the photographer’s skill is able to capture physical properties in an almost tactile way. Most of the cars are photographed against a white background, a few against black. Again, gauge the impact this has on your perception. Also observe that many of the cars are shot from a lower-than-normal angle (by putting them on a platform). Even many of the close-ups are shot from unusual angles, making the old look new. The book’s landscape format provides an almost 25”-wide canvas when open and several photos take full advantage of it (most spectacularly a top-down shot of a teardrop-shaped pointy-nosed 1939 Lincoln Zephyr), and thanks to a properly rounded spine the book opens fully flat. Some of the convertibles are shown in top down and up configuration. Long story short: savor the photos!

Even the pages with a lot of black on them are remarkably fingerprint-resistant. Appended are mini bios of the men (sorry, no women this time) who made the cars, a glossary of motoring and coachwork terms, and a directory of museums and collections. The Index listing cars and people is sufficient but the Table of Contents really ought to have listed all the cars, if only to put less stress on the binding by constantly flipping back and forth.

Lastly, a tip of the hat to the publisher who has held the price on these books to what it was back when the first one came out in 2004. Most of the older ones are still available; also in softcover editions.

McQueen’s Machines: The Cars and Bikes of a Hollywood Icon »
« Behind the Wheel: The Great Automobile Aficionados