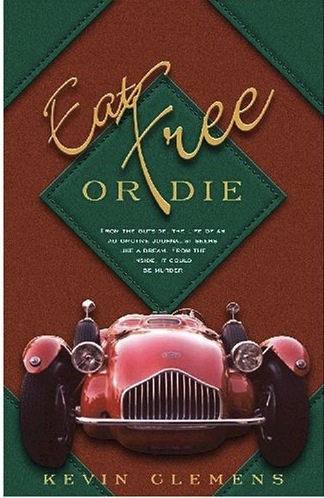 Written by a bona fide, real-life, practicing, authentic, credential-carrying automotive journalist, Eat Free or Die is a wild ride (that was just too easy!) of a novel which I read as a sort of slightly less-complicated, car-centricDaVinci Code. This fast-moving (is that another car reference?), turbocharged whodunit features the adventures of a super hot-shot automotive journo from a super hot-shot automotive magazine.

Author Kevin Clemens alliteratively named his protagonist Simon St. Scot. Said hero, St. Scot, surely has it all. He lives in an old-but-capacious, tastefully-reconditioned former firehouse in the guts of the big city. It is fully equipped with a complete automotive workshop where this word-twister gets his frustrations worked out by skillfully beating out panels of (very) expensive classic (and Classic!) cars. That is, when he’s not flying business class to the best parts of the known world on some lavish press junket to test the latest ZoomMobile 800 at the Nürburgring or Paul Richard. As Clemens takes pains to oft remind us, top motoring journalists like St. Scot are paid sub-slave wages, but the “bennies” (piled high onto smoking Platinum corporate cards) are simply super-spectacular.

Of course, all the cool car stuff suddenly gets sort of secondary when some SOB burns St. Scot’s cool firehouse down, some other guys (maybe the same guys, but they got away) take a couple of potshots at him while missing St. Scot, but hitting possibly the best-looking Detective in the whole NYPD (Miss Linda Jamison). A wild-assed car chase ensues that ends up with the bad guys shooting themselves (and not in the foot, by the way). And that’s only after St. Scot’s former editor apparently commits suicide for no earthly reason.

St. Scot’s life really starts to get interesting when he suddenly becomes the prime suspect in the above suicide (that’s where the hot NYPD cop comes in) and our car-guy hero is swept up in a fast-revving motor murder mystery that takes him all the way to Japan for a tryst in the back seat of a (wait, am I telling you too much here?). Anyhow, Clemens shows good attention to detail (all the car stuff, both new and classic) and goes easy on the (obligatory) sex scenes.Scattered throughout this page-turner are a number of references to, and short character sketches of “fictional” high-profile motor magazine journalists and editors. Many of them are based on the real-life guys and dolls of the biz. The closer one is to this industry, the better “the story within the story” gets. (I’ve known a few and recognize some.)

Suffice it to say, this novel alternately coasts and careens toward its conclusion (which we’re not going to telegraph here), with fast cars, gunplay, and (stop me if this sounds familiar) the new “great blue hope” American Supercar (that’s not all that super, as it turns out, and is a whole lot suspect in its pedigree and promotion), a little foolin’ around (the movie version—and this novel would make a good movie—could most likely expand on that), more cars, that chase scene, and, and… Well, you just need to read the book. It’s good fun for the money.

Posted Under: Automobiles, Fiction | Author: Doug Stokes | No comments yet