F1 fan or not, anyone who likes a big story well told ought to watch this documentary of a supremely skilled, courageous, enigmatic, controversial race driver who paid the ultimate price for doing what he felt he was put on this Earth to do. 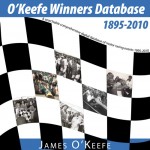 This CD-ROM is a digital version of O’Keefe’s The Winners Book: A Comprehensive Listing of Motor Racing Events 1895–2009. Unlike a printed book, a digital database can be kept current in perpetuity in the form of periodic updates.

Anyone with an interest in the impact of the early motorcar on culture and society, early automobility, industrial history, or even a Who’s Who of the early 20th century will find in the almost 40,000 Rolls-Royce files on DVD an inexhaustible store of raw data.

When first released in 1996 the book garnered raves from everywhere and everyone. The automotive media heaped on still more praise—and now it is released as a searchable DVD.

This film, made in 1953, has old cars, romance, comedy, gentle action, along with sex appeal and charm enough to drain away the day’s tensions—it almost guarantees you’ll be in a good mood after seeing it!

This is not a documentary but a theatrical movie telling the story of the legendary Bert Munro, the New Zealander with a dream to set a record at Bonneville on the Indian motorbike that he had owned for forty-some-odd years.

Fitch is today a living testimony to the fact that attaining a “certain age” need have no relationship to being useful or productive. One must only remain fully engaged in life and living and, of course, be blessed with the gift of good health. As proof, take a look at this DVD, gloriously filmed by Chris Szwedo,