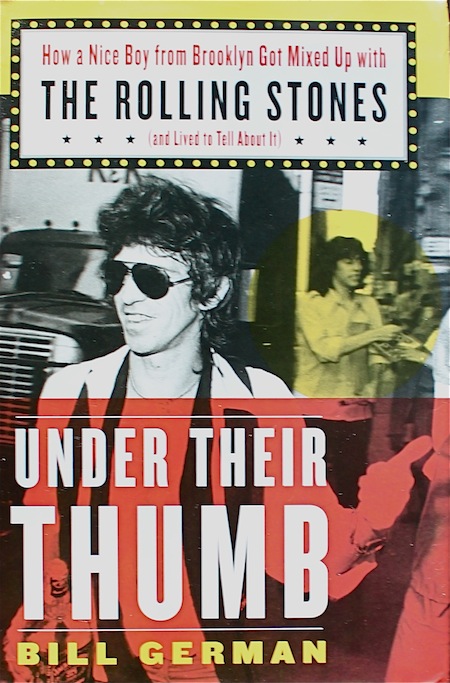 Rarely does an author of a rock-and-roll memoir come off as someone innocent, sincere, kind, and, for the most part, unscathed and untroubled. Assuming it is possible to determine accurate insight from reading Under Their Thumb, Bill German is all of the above. You can tell that he loves and respects his Mom and Dad, and that says a lot about anyone. A certain guilelessness permeates the book.

In 1978, at that blissful age of sixteen, he began publishing a fanzine, handmade and crude at first, Beggar’s Banquet, and he—and his fanzine—spent the next eighteen years growing up with the Rolling Stones. Through determination, hard work, luck and, more than likely, his winning personality, German became known to Charlie Watts, Bill Wyman and Mick Jagger; and he became true friends with Ron Wood and Keith Richards. What made Beggar’s Banquet beloved and respected by both fans and the Stones was that German’s motives were based on neither greed nor starf**king. He sincerely admired the Stones and their art, and he had been willing to constantly sacrifice his time, his efforts and his comforts—and, early on, it seemed even his very future—to make his magazine honest and accessible. Except for a brief interim when, with German’s participation, Banquet was co-opted by suits, a situation that ended badly and reinforced German’s conviction to stay pure and unbeholden, his integrity was upheld.

What makes this book likeable is that the inside information is not focused on sex and drugs, but instead set its sights on the stay-at-home Woods and Richards. There are late-night bashes, true, but there are also family birthday parties. German was privileged on many occasions to listen to kitchen and basement jams, and, overall, he was trusted and integrated into their lives. Many of the post-concert parties were a few friends sitting about a hotel room amiably chatting. Wyman was always polite and friendly, but German had little contact with him. German was never really on Watt’s radar screen. As it is in most books about the Stones, Jagger is shown to be quite aloof and seemingly schizoid. German relates one incident when the Stones’ frontman literally got into the younger man’s face. Wood comes across as a really nice person, a friend, a family guy. Richard’s habits are well known, but during the time of German’s involvement, the 1980s and 1990s, much was already behind him.

And it is the appealing portrait of Richards that crowns German’s book. Richards is open with German, actively supportive of his work, and would invite the journalist to his apartments and hotel rooms (most of the book is set in New York City), invited him because, despite the difference in their ages, Richards honestly enjoyed German’s company. In Thumb Richards is rendered as someone warm and agreeable. At the party celebrating the tenth anniversary of Banquet, no Rolling Stones were expected. It was a given that Wyman, Watts and Jagger just wouldn’t show, and Wood and Richards held legitimate excuses. Richards, however, played hooky from a recording session to finally attend. He was cordial and approachable to German’s friends and family, especially Mom and Dad. He wouldn’t have missed it for the world. There are other bits scattered throughout Thumb that belie the unsavory reputation of rock-and-roll’s Prince of Darkness. 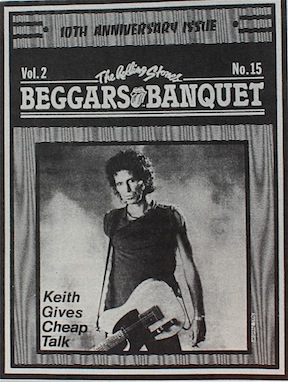 German, too, is good at painting fast portraits of supporting characters. Freddy Sessler’s story is both tragic and genuinely funny; feisty and opinionated, part of the Stones’ inner circle, at seventy, he is still living a hardcore rock-and-roll lifestyle. Eric Clapton is likable enough but a bit dopey, a little strange. Everybody loves Bert Richards, Keith’s father. Jane Rose subverts her surname—the thorns are sharp. And German himself is seen, likely as not, as forever loyal, sometimes bumbling, generally standing up to subversion and frustration and always a reliable friend. It is this characterization that makes the book an agreeable alternative to most tell-alls, as most revel in the insalubrious and the exploitive. Under Their Thumb does have its faults. An index would have been helpful and German’s prose occasionally becomes a little too folksy and affected, and it is not surprising that sometimes German is star struck. But the book does have a happy ending, and the oddest thing about it just may be the title: the pressure of the collective thumb of the Rolling Stones that German feels is mostly light and benign.