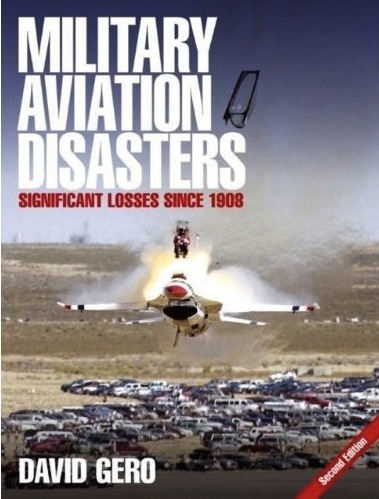 by David B Gero

Gero, a television director, is used to playing detective and has spent years gathering information on more than 5,000 incidents of all kinds and has written two books on this subject already (Flights of Terror, 1997 and Aviation Disasters, 2006).

There is an agreed-upon definition of what constitutes an aircraft accident (by the Convention on International Civil Aviation) but for the purposes of his work Gero uses as a rule of thumb for defining “significant loss” those incidents in which at least 20 people lost their lives. In this book he expands that criteria and includes several other incidents that were “particularly noteworthy.” This may all sound terribly morbid but the fact is that each year dozens of military aircraft of all kinds suffer or cause accidents. It should probably also be said that the book doesn’t cover only military actions but all events in which a military or military-affiliated craft is involved. Examples would be air shows or the 1972 Uruguayan military transport carrying that country’s rugby team which famously crashed in the Andes. Even Orville Wright’s crash near Washington, DC is included because it was a demo flight for the Army and the casualty was a Lieutenant.

This is a fully revised and updated 2nd edition of a book first published in 1999 and now includes the second Persian Gulf War and the Iraq and Afghanistan campaigns, expanding the coverage to July 2009. Starting in 1908, accidents from all over the world are described in chronological order. Each accident states date/time, location, operator and aircraft (fixed and rotary wing, dirigibles, gliders), followed by a run-down of the basic background, chronology and causes, to the extent that they are known or can be deduced. On occasion diagrams are used to clarify certain issues. The entries range from a few lines to about a page.

It should be no surprise that not every accident is illustrated with a photo. If anything, it is surprising that there are as many photos as there are. Of the 170-odd photos only about a third are of the actual accident described. The remainder are stock photos of the particular aircraft or type. Photographically, the cover photo is particularly noteworthy for its head-on view of an F-16 air show pilot (U.S. Air Force Thunderbirds display team) ejecting. Not fitting the author’s criteria, this incident is not covered in the book, nor are a number of others a reader who follows this subject might expect. Still, there is no reason to question the author’s and the publisher’s claim that this book is “the most comprehensive reference work on the subject ever published.”

There is a Bibliography, and the Index is commendably detailed but not easy on the eyes due to the way turnover lines indent.

For readers who have a particular interest in the photographic record one might point out the book Snakes in the Cockpit: Images of Military Aviation Disasters by L. Douglas Keeney (2002) but its scope and presentation pale in comparison to Gero’s (it is not even listed in the Bibliography). The author invites emendations or clarifications via his publisher.