Big Sid’s Vincati: The Story of a Father, a Son, and the Motorcycle of a Lifetime 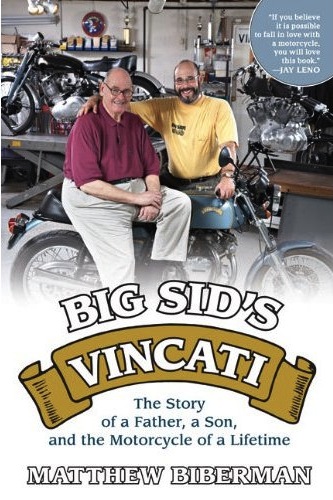 Sid Biberman’s first motorized two-wheeler was a Schwinn bicycle powered by a Whizzer kit paid for with money from his bar mitzvah. The feeling of “moving effortlessly through space” on his bike set the course for his life. It wasn’t long before Sid yanked the Whizzer’s cylinder head. He replaced the thick fiber gasket with one that he made from an aluminum pie pan. The Whizzer was noticeably faster. Sid was hooked, and thus began his never-ending search for more speed.

Jump forward a few years and see “Big Sid” wheeling a Matchless Super Clubman one Sunday afternoon. One of his buddies, riding a Vincent Black Shadow, left Sid behind in the dust. Naturally Sid asked his buddy if he could try it out. (You can “hear” this one coming.) He threw a leg over the Vincent for that test ride and that’s all it took. From that day forward, Sid Bieberman’s life would be forever entwined with a Vincent. For the next 60 years he would restore, repair and ride this majestic brand. His second-most favorite bike was a Ducati.

Sid managed to buy a new red Rapide in early 1951. His riding was shortlived because his draft notice came shortly thereafter. When he returned from service, his treasured bike had been trashed because it had been drag raced by the owner of the shop where it was stored. Sid rebuilt the Rapide with high-performance parts and it blistered the dragstrips with a rider (a man smaller than Sid) on board.

No surprise that Big Sid’s son, Matthew, grew up around motorcycles, and began riding when he was 16 years old. After attending Dartmouth where he studied English on a scholarship, Matthew left bikes behind as he built a career in writing and teaching.

Though Matthew and his dad were living in different worlds professionally, they still shared a passion for motorcycles. Big Sid moved to Louisville where Matthew had a job teaching literature and creative writing at the University of Louisville. When Big Sid had a near-fatal heart attack, Matthew promised his dad that when he recovered, the two of them would build a Vincati, a mythical dream bike that married the engine of a Vincent Black Shadow with the chassis of a Ducati GT. No one in North America had ever built one.

Big Sid’s Vincati is an engaging tale that spans three generations. It not only gives the reader a feel for Big Sid’s early days and how the classic Vincent grasped him with such passion, but it also goes beyond motorcycles and chronicles how “the mechanic and the professor” put aside the prickly parts of their past to find renewed affection and understanding for each other.

Big Sid’s Vincati may be the best motorcycle book that I have read sinceZen and the Art of Motorcycle Maintenance. As soon as I finished it, I started thinking about the Triumph Cub I rode in college and how much fun it would be to restore one.

Copyright 2010 Tom Strongman (speedreaders.info)
(Reviewer Strongman, semi-retired from automotive reporting at a major city newspaper, is now author of his own book Wheels of Dreams.)

Posted Under: Biography/ Autobiography, Motorcycles | Author: Other | No comments yet