Barbie™ i can be™ President 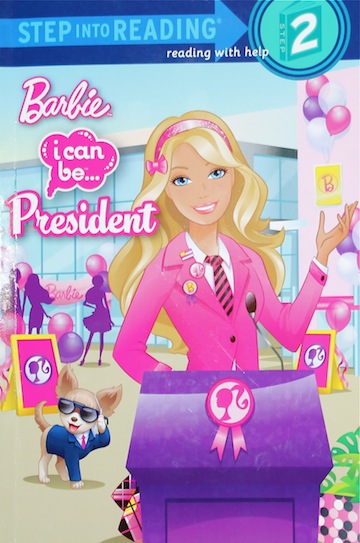 Oh, what to do with this book? What to think? Bury or praise? That President sends mixed messages is true, and how to approach these messages becomes problematic. Take for instance the complication of the title itself, with the intrusive trademark symbols and the cutesy lower case for the “i can be™.” Is the title then a subliminal suggestion that this book is just one more product in the Mattel Barbie franchise, another toy like the Barbie® 3 Story Town House®, the Ken® My Cool Mini, or the Barbie® I Can Be™ President B Party™ Doll, another item to be collected? Notice by the prevalence of trade symbols that Mattel reaches for the utmost legal protection. Although justified considering the flood of various knockoffs and counterfeits the company must contend with, I cannot help wondering if Mattel’s motives are pure and if the trademarked “B Party,” an alternative to the Democratic Party or the GOP, is a precursor to the toy company’s long-term political ambitions. Barbie for President of the United States of America? Well, considering the current state of national politics and governance, perhaps that might be an improvement. But, that said, and taking one more look at the cover, we find the name “Barbie” is used twice; the B Party symbol is both on Barbie’s lapel and, festooned with balloons, on a wall poster; and the pony-tail Barbie logo is found four times. We find Barbie’s adorable Chihuahua, Lacey, dressed as a Secret Service agent, and we know that Lacey is marketed abundantly as several kinds of merchandise. This is more than a cover illustration. It is a commercially driven advertisement, and, like Russian dolls, a series of product placements within product placements.

Praise for the book is deserved for the theme, the text. Barbie is running for class president, although, for a more general appeal or for a more selective target, it is ambiguous as to whether this is a high school or a junior high. Barbie gives speeches; Barbie wants better nutrition in the school lunchroom while Raquelle, her opponent, wants more dances. Barbie campaigns by giving out buttons, chatting up her constituency and giving an interview to the school paper. Barbie wins, and, the President of the United States, fictional, a woman, visits Barbie’s school, explains her job and inspires our young, talented and beautiful ingénue. Maybe one day Barbie will be President. The book makes use of simple sentences and easily understandable information about school elections, and there is little or no condescension. Praise can also be given, easily given, for the fact that Barbie’s school is integrated, and that the President of the United States has black hair, medium-dark skin and brown eyes—a welcome ambiguity of cultural background. Along these lines, the accompanying product, the Barbie President doll mentioned above, was originally sold in at least five variations: Caucasian Barbie, African-American Barbie, Asian Barbie, Native-American Nia, Latina Teresa. (At least one source describes Teresa as being Italian.) This is commendable, fair-minded, and, again, worthy of praise. 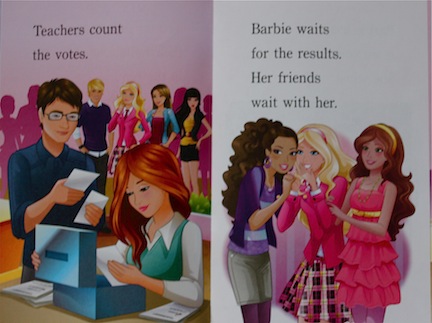 It is the subtext that is hard to take, but to criticize or even analyze it is fraught with shifting ideals, ideas, attitudes and judgments. Does the proliferation of purple and pink in President, a proliferation found in much of the Barbie universe, send an undesirable message to little girls? Is there far too much emphasis on a nearly unattainable ideal of femininity? Barbie’s school appears as a place that would, with its plush, rose-colored cafeteria chairs, two-story plate glass windows, decorative hall plants and perfectly clean and tidy rows of lockers, seem even more Beverly Hills than the most exclusive Beverly Hills school we could imagine. All the students are dressed to the nines, the boys sleek and trendy, the girls mostly frilly and wearing high heels. Their legs are disproportionately and unrealistically long. What is the message here? There is one illustration that particularly galls: “Barbie waits for the results. Her friends wait with her.” Barbie’s left hand is in front of her mouth and we can all but hear the tee-hee as her friends gather around in support. It is like a scene from a beauty pageant, a pan of the contestants, the Beauty Queens, immediately before the announcement of the winner. Is this really the subtext a parent wants a young daughter to absorb? Should this book be praised for its forthright political correctness or should it be buried for its perhaps damaging, exaggerated idealization of feminine charm and beauty? A tough call, a very tough call. It is not easy raising a daughter in today’s world, and, like it or not, Barbie, in all of her manifestations, is an inescapable, often beloved, well-established worldwide institution.

Barbie™ i can be™ President