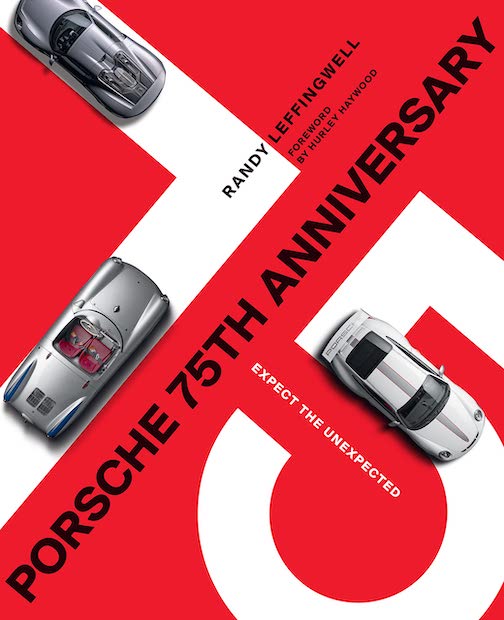 by Randy B. Leffingwell

The title says it all: Porsche has achieved a significant anniversary. For author Randy Leffingwell that seemed like a perfect reason to write a 75-year retrospective and conclude it with a little educated future predicting.

The story tracks chronologically with Leffingwell’s narrative a clearly written straightforward look at the company and its cars detailing how each succeeding type advanced engineering over its immediate predecessor all the way to the development work of today. He acknowledges that racing and Porsche have been inextricably intertwined since day one with this: “Because with Porsche, racing has for seventy-five years directly affected the cars the company offers its customers on road and on track” and the first chapter tellingly is titled “We’re Racing to Rome in a Beetle?” Of what follows, fully half of the book’s 30 chapters are racing-oriented with the other half street- or production car centric. 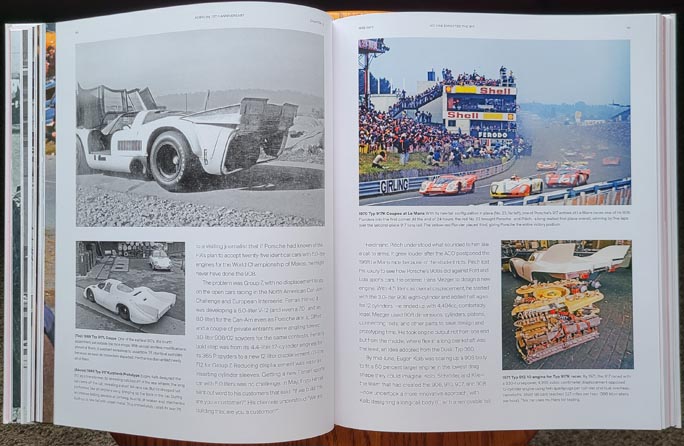 The Index gives a good indication that the cars are indeed this book’s focus with no less than two-and-a-half of its four pages devoted to the enumeration of models or types, with appropriate page references of course. There’s no Bibliography. However Leffingwell does cite several titles and quotes their respective authors so readers are aware of at least some of the sources he read—actually probably reread for this is certainly not his first book. If you have a copy of every book he’s written, you’d have at least 50 and while most are transportation related, not all are. There’s a lovely book on lighthouses, several on barns, and more.

He could have quoted himself (though that might have been considered inappropriate) for, to date, he’s written and had published around a dozen Porsche titles (some of which have been reviewed on this site). Likely the first was the 1993-published Porsche Legends. He enumerates them on his website even refreshingly commenting on one, the fourth edition of The Porsche Buyer’s Guide, that “With the process of researching, writing and printing a book taking nearly a year, [some of] my information was out-of-date before the book hit stores.” 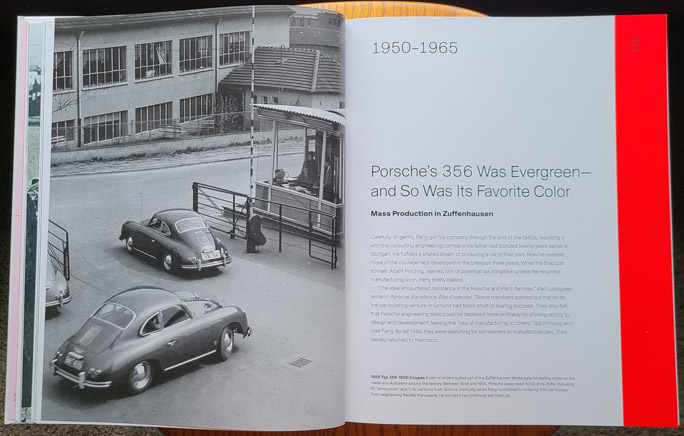 With the image above, Leffingwell reaches the point in his narrative where he can and does bring Maximilian Hoffman into the picture (literally not figuratively). As they say, the rest is legend. Hoffman is said to have huffed that “If I can’t sell five Porsches a week, I’m not interested.” Obviously the car sold well, then so did the marque such that by the “tight money days of the early 1970s nearly half of Porsche production was sent to the US. It was an essential market.”

Leffingwell has worked for so long with his publisher and editor at Motorbooks that he dedicates this book to Zack Miller. Whether it was Leffingwell or Miller, or perhaps a combined effort, chapters have ever increasingly catchy, clever titles—especially once radiators are introduced into Porsche engine compartments: “Water-Cool the 911? Heresy!” 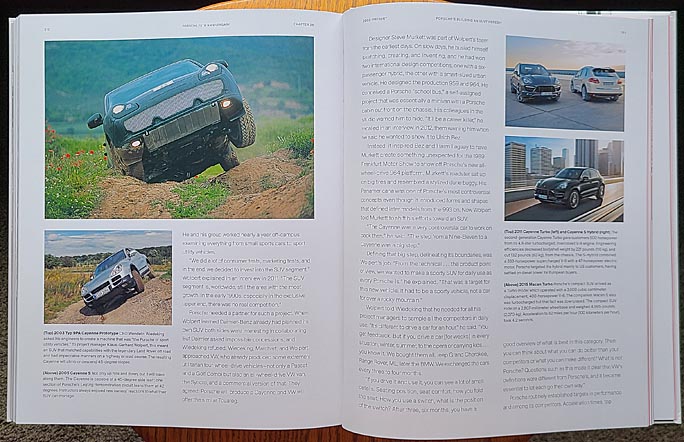 Another “heresy” chapter tells of Porsche’s building an SUV in which this spread appears. Image at top left includes in its caption that “To project manager Klaus-Gerhard Wolpert, [‘creating the Porsche of sport utility vehicles’] meant an SUV that matched capabilities with the legendary Land Rovers off road . . .”

The concluding pair of chapters explore electric power, or as Porsche refers to it e fuel-powered street and racing machines. Even as e fuel is seemingly the way forward, Leffingwell concludes by predicting that “Porsche will have battery electric, plug-in-hybrids, and internal combustion engine power sources for some time.” 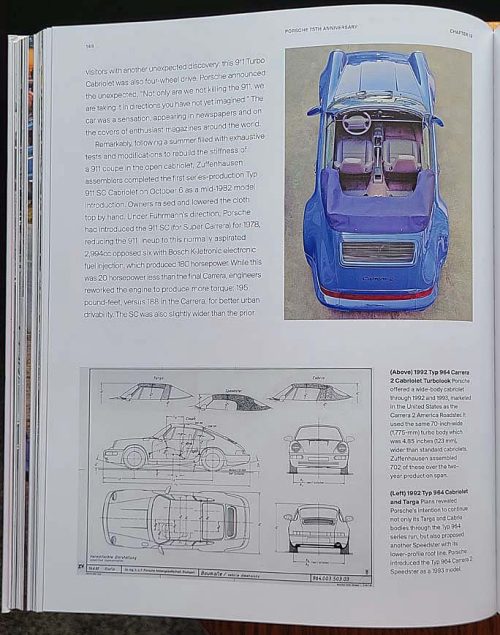 This drawing acknowledges the new-in-1991 CEO Peter Schutz’s now legendary actions extending the 911’s lifeline and supporting continuance of targa, cabriolet, and speedster bodies with the Typ 964 and this planning drawing was adapted for this book’s endpapers.

It’s a well-produced book albeit, due to it being oversize and weighty, it’s not a candidate to read slouching on bed or sofa. Besides you’ll want good lighting and a comfortable chair in which to enjoy the images. Those on the book’s front and back covers and dust jacket came from Michael Furman with the vast majority of the interior pages illustrated with photos sourced from Porsche’s archives. And Leffingwell’s narrative also includes quotes and observations from numerous of Porsche’s key personnel, many of whom the author has personally interviewed over the years.

Along with the previously reviewed Air & Water and the yet to be posted review of Porsche Special Editions the count currently is three books published to date observing various aspects of Porsche’s seventy-five years from when, according to Porsche.com, “The first vehicle to bear the Porsche name was registered on June 8, 1948: It was the 356 “No.1” Roadster. This is the day on which the Porsche brand was born. The Type 356 turned Ferry Porsche’s dream of a sports car into a reality.”

by Randy B. Leffingwell

Posted Under: Automobiles, German | Author: Helen Hutchings | No comments yet

P&O: Across the Oceans, Across the Years »
« BMW Motorcycles: 100 Years