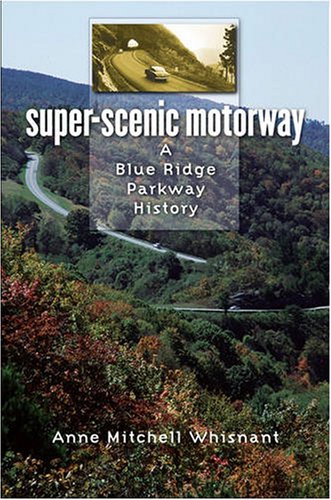 “This book departs from a romantic view of the parkway as a modern miracle and as a pure gain for everyone involved and looks critically at the road’s history as a project created by human minds and hands, paid for with public funds, in the service of some version of the public good.”

It is a free public road that was built with public funds and for the public good; it has limited access from adjoining properties, a wide protective right-of-way, and caters not to commercial interests but rather to please those whose travel its 469-mile length. It is, of course, the Blue Ridge Parkway. It winds from Milepost 0 just outside Waynesboro, Virginia to its final Milepost 469 just north of Cherokee, North Carolina. Each year it attracts more visitors than the Grand Canyon, Yellowstone, and Yosemite national parks combined.

The carefully designed landscape of the parkway allows the presentation of a very controlled, picturesque scene of the Blue Ridge surroundings as one motors along the parkway. The bucolic scenery one sees from the comfort of an automobile is the result of the efforts of landscape architects and rural planners who created and then built their vision in a generally remote part of the American South. Almost all of the books and other writings regarding the parkway have stated, in one way or another, that the creation of the Blue Ridge Parkway was a New Deal effort that was a “Godsend for the needy” living in the areas the parkway transverses. This is certainly the story that the National Park Service has handed down over the years. But author Whisnant holds that, for all intents and purposes, it is a myth to think that the parkway was received with open arms by the inhabitants and built with little to no opposition.

Whisnant approaches the Blue Ridge Parkway not as a travel writer, as many have, or as a National Park Service publicist, but rather as an historian. The chance discovery of a file card in the university library’s card catalog that noted the opposition of the Cherokees to the parkway during the 1930s caught her attention while doing research as a graduate student at the University of North Carolina (where she is now Director of Research, Communications, and Programs for the Office of Faculty Governance and adjunct assistant professor of history). Although she had often traveled the parkway and even worked near the park while growing up, this was the first indication that the history of parkway might not be quite as bucolic she had been led to assume.

Although the construction of the Blue Ridge Parkway was, to a large extent, a New Deal works project, there is much more to the tale than that. The idea for a parkway connecting the Shenandoah National Park with the Great Smoky National Park using a scenic highway originated in Virginia. The often epic battles regarding the parkway, however, were fought in North Carolina.

Whisnant does an excellent job of covering the many fights, small and large, that were waged over the parkway, particularly those fought early on regarding its route. Forgotten by all but a few is that rather than end near Asheville, North Carolina, there was another plan to end it near Gatlinburg, Tennessee. To say that there was a bitter struggle between Asheville and Knoxville over this would be an understatement. Neither emerges from Whisnant’s account unscathed. In fact, after reading the book, your view of Asheville might never be quite be the same.

That there were more than a few attempts to skew the historical record regarding the parkway brings the story up to the present day. Surprisingly, the last section of the Blue Ridge Parkway was not completed until 1987, when the Linn Cove viaduct at Grandfather Mountain was completed. That there is a story behind that too is another can of worms that Whisnant tackles, making it clear that the issue between the Park Service and the owner of Grandfather Mountain was not one concerning the ecology—the family was logging the mountain and built a private toll road to travel to the top—but rather of money.

Then there is the story of Little Switzerland, North Carolina, the only commercial enterprise directly on the parkway—which just “happens” to pass right through the middle of this tourist trap. One is sufficiently shocked, of course, to learn that the owner was a North Carolina Supreme Court judge, Heriot Clarkson.

The parkway, one realizes, was largely the product of wishful thinking, of seeking to preserve something that did not actually exist—call it “hillbilly culture.” That much of the route of the parkway was literally landscaped and often bore little resemblance to what it had been before the workers transformed it, or that most of the artifacts of mountain life seen as one travels the parkway, reflect an imagined world, not a historically accurate one.

Today, the Blue Ridge Parkway is slowly deteriorating, the lack of funding for maintenance and repairs over the years beginning to become difficult to ignore. Unlike the parks operated by the Park Service, the parkway itself is the attraction, hence, the lack of recognition of the need to maintain and repair it. Whisnant suggests that while the parkway has survived 75 years, it might not be around for another 75.

The University of North Carolina Press, 2006