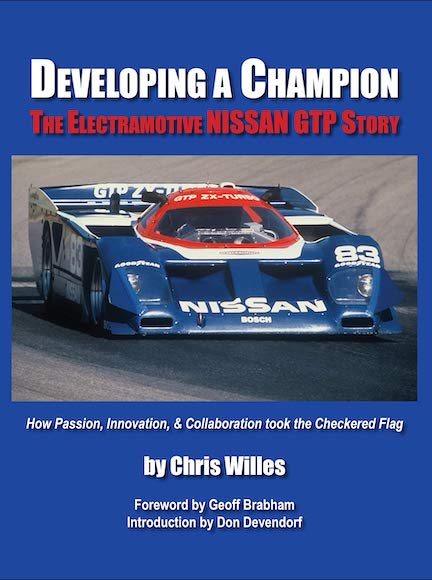 Are you a fan of a well-written, document-supported race car story—especially one that delves into the development as well as the on-track experiences? If so, put Developing A Champion, The Electramotive Nissan GTP Story by Chris Willes at the top of the list. In this, his first ever book, Willes (pronounced as though it were spelled Willis) tells of Nissan—once it had arrived in America in1974 when, if you recall those days, it called itself Datsun—and its participation in the IMSA racing series.

Electramotive and its GTP involvement as the author, who is also the book’s publisher, shows and tells on his book’s pages, includes company history as well as the people and personalities who make it all happen. It is a racing history that also shares technical explanations and details not usually accessed by, or available, for a writer to include in a book. Willes’ ability to include these illustrations and explanations is due to his being an ultimate insider, an engineer who was hired by Electramotive even before the ink on his college degree had dried.

He remained with Electramotive until 1999 when Nissan absorbed those development and racing functions into their own corporation renaming it Nissan Performance Technology. At that time Willes saved files, drawings, and photographs from the dustbin. Thus while there are some of the usual images shot by professionals of on-track action, there are also an abundance of images—accompanied by clear explanations in text and captions—taken “in-shop” by various Electromotive employees merely to document their projects and progress. Readers of this book are privileged to see and read about the activities too. 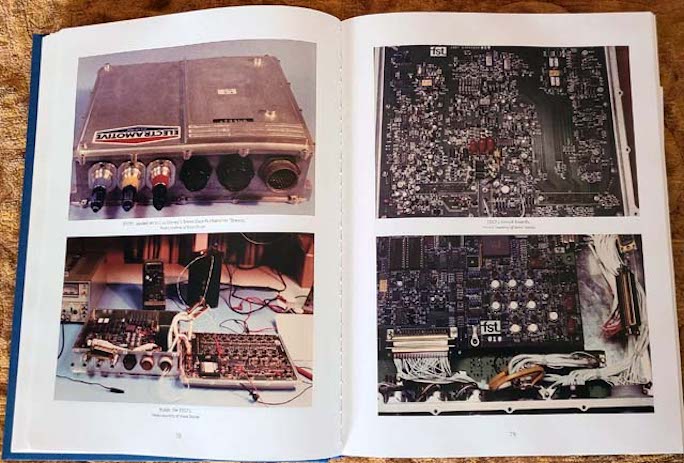 Above: it’s uncommon indeed for race teams to share detailed looks at circuitry and components. The page pair below has images taken in 1990 and ’91 at 24 Hours of Daytona, 12 Hours of Sebring, of the Nissan Performance Technology bodywork and NPT’s 01 chassis. 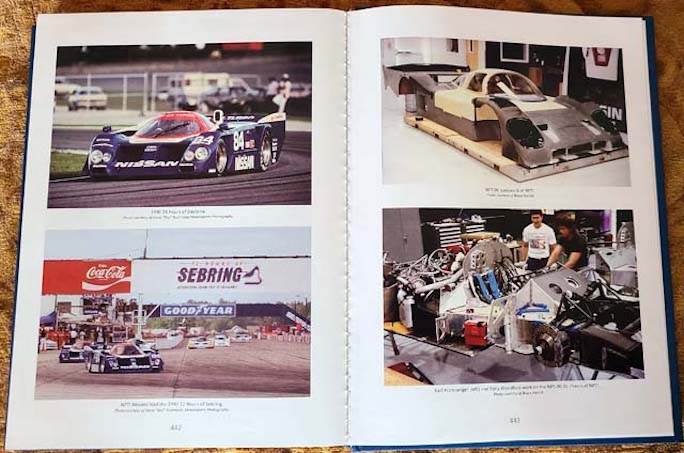 Simply and truthfully, Willes has done a splendid job. There is nary a flaw, misspell, or typo anywhere on any of the book’s 444 pages. That said, the printed book does not contain an Index. But there is a thorough and comprehensive one available for inspection—and is also a free download (no purchase required)—on the author’s website. 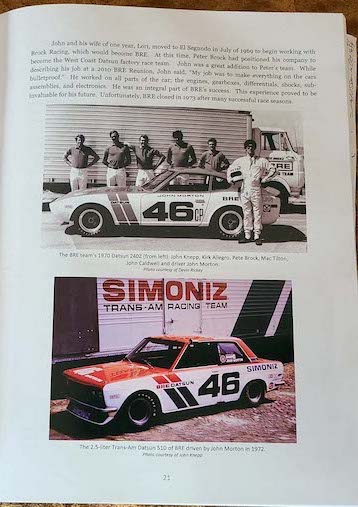 Literally, the earliest days, the Datsun-in-America beginnings, involved Peter Brock and his BRE team. BRE driver John Morton continued his involvement once Datsun had completed its name change which it accomplished gradually over three years during the first half of the 1980s. Those later chapters include John going airborne in 1988 at Lime Rock in his GTP car during pre-race practice. When his car came back to earth it burst into flames. From the photos one would think the worst but as you’ll see and read such was not the case though the car was pretty well done for.

John was interviewed during the race which teammate Geoff Brabham drove. John mentioned “looking a lot worse than I feel [as] my injuries were real superficial, mostly . . . burns.” He went on to observe that, “I think [Lime Rock] is probably going to have to do some re-excavating on that section of the track.” 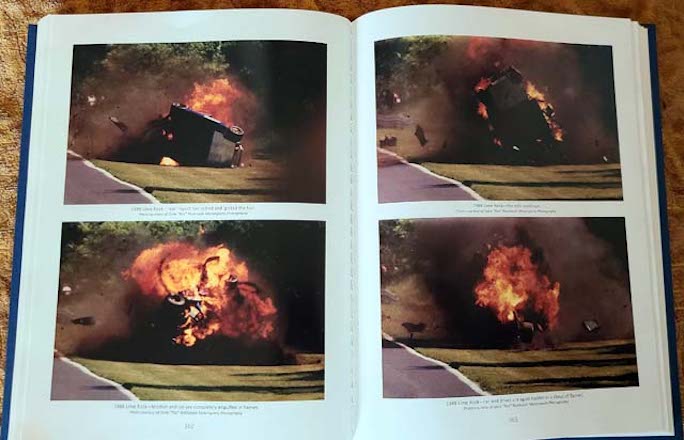 An addendum to Morton’s unscheduled and unwanted flight is that Lime Rock did make almost immediate changes to the course on the backside, right after the portion known as No-Name Straight, to preclude another such unwanted event. Once the Uphill is negotiated, as it heads into the Back Straight, the track installed The John Morton Chicane so that a driver had to brake rather than accelerate at the top of the Uphill and thus the car would retain its contact with terra firma.

Other photographs are notable for while there are, as mentioned, some of the usual racing images, there are many taken in-shop-just-to-document-what-they-were-doing and engineering drawings accompanied by words (text and captions) of details including an entire chapter dedicated to the creation, function and subsequent charts/graphs with readouts from use of Electramotive’s 1/7th-scale wind tunnel. Similar detailed explanations and photos show the dynamometer installation, testing, and results.

While very generously illustrated with over 500 photos (and that count does not include the additional 45 technical drawings, charts, etc), some of the images on the printed page are rather dark such that details can get lost due to lack of contrast. I have other books in my library attributed to the same printer, Bang Printing, which display similar characteristics of too-generous inking. So, blame likely can be put at the doorstep of the printer rather than the photographer or the image itself. 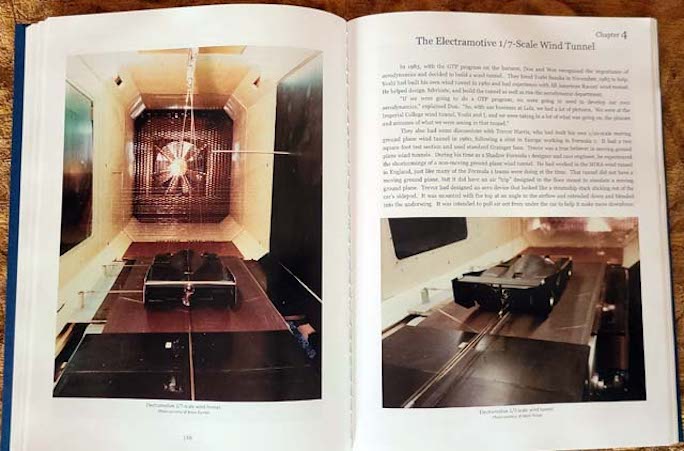 Racing is full of wonderful stories but without documentation it can be difficult to sort fact from fiction. In this book Willes puts documentation to Electramotive’s crew being truly dedicated to winning even if their methodology was sometimes—ummm—unorthodox.

Your commentator has heard of similar incidents where, during a race, the racing machine needed a part that the crew didn’t have but they did find what was needed on a car in the spectator’s parking lot and “borrowed” it. But they’ve always been just stories until this book. Willes has documented those Electramotive’s “borrows” and they make fun reads because the hapless spectator was not left in the lurch, did get back to that night’s lodging safely, and did have the “donor” car restored to whole too. It’s up to you to find those pages and passages in Developing A Champion to read and enjoy for yourself. 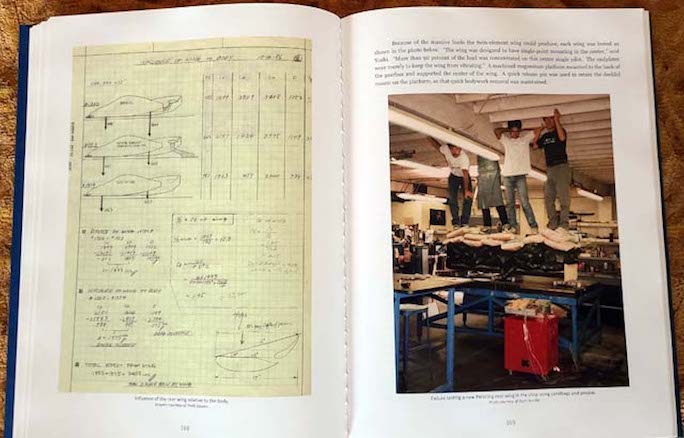 Developing A Champion is an exemplary book that excels at relating its story. Kudos to author/publisher Chris Willes.