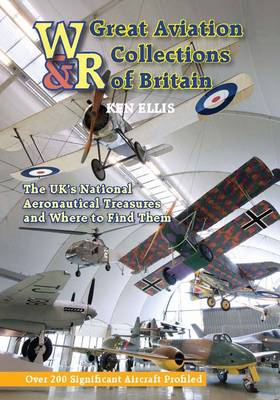 “The exhibit profiles do not attempt to list every oil change, service and re-spray in an exhibit’s history. The aim is to explain why a particular airframe should be regarded as important, as a type or its particular career, and then how it came to be preserved.”

This small excerpt illustrates both the levity and the earnestness that have so distinguished Ken Ellis’ writing in Wrecks & Relics (biennial books) and FlyPast, as well as other magazines, over the years. Published on the centenary of the donation of what is now the oldest surviving UK military aircraft, a 1912 Cody 304, this book presents a little over 100 of the most important aeronautical exhibits in England, Northern Ireland, Scotland, and Wales.

When the Cody was donated, it wasn’t at all clear to anyone if a museum would be interested in a thing that may amount to no more than a passing fancy, let alone into which museum’s jurisdiction it belonged. Today, with the benefit of hindsight, we see what seems an unbroken arc of going from strength to strength, and an emerging technology becoming a dominant even ubiquitous one. That means artifacts are piling up, and that means someone has to figure out what to do with them. It boggles the mind to think that there was ever a time when there was simply no recognition of the value of the past or its meaning for the future and historic pieces were relegated to the smelter even when no secrets needed to be safeguarded or raw materials be recycled. Consider that when Ellis co-wrote a similar book in 1977, British Museum Aircraft, they reported on 39 venues. This new book covers over a hundred, and that only after considerable deliberation what to leave out. Good times.

If you know Ellis’ work from the aforementioned magazines, or his 2011 book Lost Aviation Collections of Britain (ISBN 9780859791595) you’ll know what to expect. This new book should come with one of those plastic magnifying cards because the type is microscopically small in order to conserve space. Space is also the reason why only key holdings are discussed, further whittled down by concentrating on British-designed and -built machines from the Gypsy Moth to Concorde.

People affiliated with UK aeronautical collections, or people who like to second-guess everything, are advised to study the Introduction and accept the validity of the author’s reasoning what to include and what to omit. As the subtitle indicates, he confined himself to national institutions, here defined as those that are directly funded by the government—except he relaxed the rules in two cases based on merit (cf. Shuttleworth Collection) or need (Wales doesn’t have any). It all makes sense and besides, Ellis can always write more books!

The book presents 11 collections large and small in detail along with two tables of former and current holdings. Contact information for another 90-odd collections are appended. As an active pilot himself, Ellis has an organic understanding of the flying apparatus he presents, and as a historian, especially coming from the preservation side, he can speak to matters of authenticity and relative importance. For each collection he describes its origins and major milestones in its development. This is done in quite some detail and underlines the point that, no matter what critics of institutionalized collecting may say, there is no rivalry between private parties, corporate efforts, and public institutions. There are, rather, splendid examples of swaps and loans and mold-making to re-fabricate scarce parts, all in the interest of the greater, and common, good.

Museum exhibits are covered in alpha, and within that, year order. This is a physically small book (fits into a coat pocket but is heavy) and so the photos cannot be large but they illustrate the text suitably and in most cases are located near their text entries. Occasional ambiguity arises when the text makes cross-references that say, for instance, “see above” and you end up having to search several pages back for the corresponding reference. The Index is divided into aircraft, organizations, people and (UK) places.

The Foreword by Michael Fopp, a former director of the RAF Museum, outlines the value of museums—and the value of this book and its author.