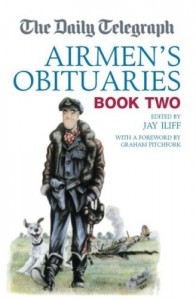 You may not have known Moose Fumerton, Bobbi Trout, Cyclops Brown, or Grumpy Unwin in life but you really should get to know them in death. Obituaries are one of the things identified most strongly with the Daily Telegraph brand and there is a whole string of books that reprints them, divided by walk of life or notoriety (Rogues, Eccentric Lives, Naval, Military, Heroes and Adventurers etc.). Think of them as mini biographies—nothing morbid about that!

This volume concerns itself with aviators. From lowly aircraftman to blueblood prince, from barnstormer to industrialist and RAF nurse to Polish Battle of Britain fighter pilot, one hundred notable lives of men and women in aviation in peace and war are commemorated and celebrated here.

“The lives of this diverse group of people illustrate all that is typical of human nature; but there is also something that sets them apart. Gallantry, fortitude, service and loyalty all spring to mind. Yet, in my experience, the majority would claim none of these qualities.”

And that public recognition of a person’s accomplishment is what makes an obituary different from a death notice (technically knows as a death ad since obits get submitted to a newspaper’s Classifieds Department).

Obituaries are as old as the popularization of the printing press. The Daily Telegraph, founded in 1855, is a daily morning broadsheet newspaper in the United Kingdom and also distributed internationally. Today, it ranks as the highest-selling daily newspaper among British broadsheets. And many among its circulation of over 800,000 start their day with a look at the obits—and not just to make sure their own name isn’t in there. Four times at least, between 1938 and 2003, the Daily Telegraph has sounded a false alarm by publishing premature obituaries. The people in this book, however, are well and truly dead.

“Getting it right” is a cardinal concern for the obituary writer, not just in terms of material facts but also in tone, nuance, innuendo, how to balance the good and the bad, how to sum up a human life of often many decades of glory and vanity in a few hundred words that will make the reader take note and mourn their loss. The deceased cannot defend themselves and the obituary may well be the last word to be recorded about them. The man in charge of doing right by them in this book is the Telegraph’s aviation obituarist since 2001, Air Commodore Graham Pitchfork. After serving in the RAF for 36 years he was appointed a Director of Military Intelligence at the Ministry of Defense and in his retirement works as an aviation historian and defense consultant. Most of the obits in this book are penned by him. A few are by his predecessor, Edward Bishop (d. 2003), who had edited Book One in this series (2002, still in print but only in the softcover edition).

The book is divided into categories, intended more to cater to the human tendency to want to classify than to impose strict organization. Keeping Fighter Boys apart from Bomber Boys and separating The Girls from the male riffraff is obvious enough but some other categories are rather more fluid, even more so as some are populated by certain entries merely to even out the numbers. Most of the personages have a British or Commonwealth connection but since many of the entries relate to World War Two there is also a chapter fittingly entitled Foreign Friends that presents other nationalities. Americans, for instance, would find here US pilots Bob Morgan (B-17 Memphis Belle) and Charles Sweeney (A-bomb).

The Table of Contents does not give page numbers (anarchy!); the Index lists all the proper names mentioned in the book (yeah!).

Read any number of these biographies, in any order, and you will be overcome with the realization that life is a harsh business and that if it weren’t for the qualities enumerated in the quote above, we’d all go to hell in a hand basket. Strangers though they may be, in the larger scheme of things each of these lives affected yours, as yours affects others—unless, like Diogenes, you live in a barrel in the forest. And probably even then.