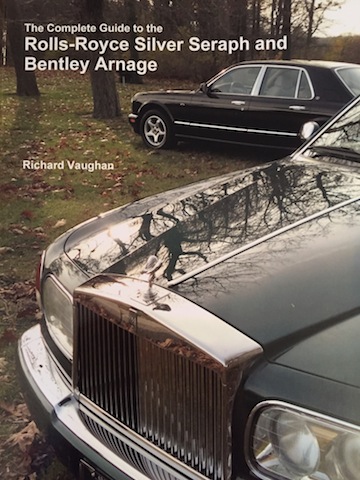 These two models mark the transition from Rolls-Royce Motor Cars owning both the Rolls-Royce and Bentley marques and in turn being part of the Vickers Group of companies to being acquired at auction by VW Group and the subsequent split of the marques between VW and BMW.

The (1998–2002) Seraph and first-year Arnage Green Label models are, in fact, powered by BMW engines which at least partly explains why these models, refined and reliable as they are, were not embraced by the purists among the traditional clientele. At any rate, this new book fills a glaring void in the historical record and is the only one to be exclusively devoted to them.

Rolls-Royce and Bentley are unquestionably two of the most written about marques in automotive history, so it really cannot be coincidence that the Silver Seraph and Arnage (SL) series cars have so rarely been the subject of serious attention in their near-twenty-year public history. All the models before them have been covered repeatedly and exhaustively, and the model immediately after them, the Rolls-Royce Phantom and on the Bentley side the Continental, were the subject of dedicated books while the other new models are simply too new to have made their way into the specialist literature.

A key chronicler of the marque, Martin Bennett, gave the SL series only cursory attention in the 3rd edition (2011) of his Rolls-Royce and Bentley: The Crewe Years, one of the standard and must-have works on the subject. A later book, written from the consumate insider’s perspective by the firm’s styling chief, Graham Hull’s Inside the Rolls-Royce and Bentley Styling Department 1971–2003 provides more detail than any other single volume, but covering a three-decade period, it doesn’t concentrate on them, simply because it can’t.

There is no shortage of coverage in the contemporary motoring press, some of which has been compiled in the usual manner into a Brooklands Portfolio (Bentley and Rolls-Royce 1990–2002). While these road tests and driving impressions are almost invariably comprehensive in nature, they were written by a multitude of authors, at different times, with different backgrounds and different sensibilities. Moreover, almost none of these scribes are owners and even though they will have road-tested the cars they write about, they have no day-to-day experience with not only the technical minutia but the way of life that is part and parcel of the ownership experience.

None of these factors apply to the author of this book. Vaughan is a long-time owner of different Rolls-Royces and Bentleys—along with an enviable list of other delectable machinery—and active in the marque club on the regional and national level. Specifically, he has edited a monthly club magazine pertaining to modern Rolls-Royce and Bentley cars (Silver Shadow to current) since its inception. Lest he be accused of being so enamored of the marques as to be blind to their faults, he is himself a US auto industry professional on the design side and thus has a catholic frame of reference.

Vaughan’s files and references can only be described as voluminous and he has at least some specific information on every car built. For this book he has availed himself of the latest Print On Demand technology to fill the void in the literature. For a POD book this one is impressive in terms of production quality and presentation. The 8.5” x 11” size allows for generously sized photos, many of which are half-page or nearly so. The color photos, of which there are over 250, are of uniformly excellent quality as far as color reproduction is concerned. A very few photos are not as sharply focused or as finely resolved as one might hope, but these are obviously instances where a relatively poor photo is better than none at all.

The paper quality is excellent and has a definite bearing on the overall quality of the photo reproduction. The book is primarily a photographic reference detailing the many differences between the models from year to year and series to series, both major and minor. The text is minimal but conveys the story adequately. Photos are carefully located in their proper places in relation to the accompanying text.

Attention is given to limited-edition models (such as Her Britannic Majesty’s Bentley State Limousines or the Sultan of Brunei cars that are so shrouded in mystery that no one has been able, or allowed to tell their full story), one-offs, and their bespoke features of which numerous examples are illustrated.

The sole disappointment to this reviewer is the lack of a hardcover version. While this was obviously done to keep the price down, the author is considering a hardcover option if enough people ask for it, another benefit of POD production as is the eradication of whatever typos readers report to the author.

No book is perfect and an Index, unfortunately, is conspicuous by its absence. Is it a “complete” guide in all respects? No, but it comes acceptably close. It is a guide to what the cars are, physically. One must look elsewhere to learn the details of how they came to be and the challenges involved therein. Graham Hull’s book, above, nicely covers those aspects. The books complement each other.

If you are privileged enough to own one of these magnificent motorcars, or been in the position to have frequent close-up contact with one, or even if you have been able to only admire them longingly from afar, you will find this fine work to be an indispensable addition to your library.

Fifty Sides of The Beach Boys, The Songs That Tell Their Story »
« Fortress Island Malta