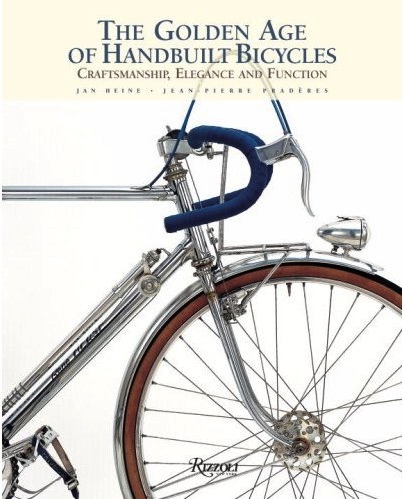 Toaster. Wristwatch. Eggbeater. Bicycle. Any number of devices play essential roles in our daily lives and yet are so ubiquitous that we often enough no longer marvel at their operating principles, purposefulness, and the realization that once they didn’t exist—and then they did. In other words, it took someone to figure it out. Before you say you could have done that, take a moment to think about tires, chains, gears, turning, staying upright and you’ll see: it ain’t so easy. Understand the bicycle and you’ll understand quite a bit about first principles, action/reaction, and an ordered universe.

An avid cyclist since his youth, author Heine is in fact quite the scientist but traded the world of academia for the one of cycling and started Bicycle Quarterly Press in 2002. As editor of Bicycle Quarterly, a well-regarded magazine specializing in classic bicycles and cycling history, he has just the sort of background, experience, and personal interests to put together a book that will engage even the reader to whom all this is new. First published in 2005 this 2009 reissue is under the imprint of New York art publisher Rizzoli, which is only fitting because Jean-Pierre Pradères’ photos are just as much “art” as the bicycles he photographs.

Considering that the book spans almost 100 years of bicycles the words “Golden Age” in the title seem a bit ambiguous unless the author means to say that, indeed, the entire era qualifies as such. Certainly today is, or is once more, a Golden Age, marked by a resurgence in the US of the sort of high-end handcrafted bikes this book showcases. (If you don’t already know it, check out the North American Handmade Bicycle Show to see what all is going on nowadays.) What the title doesn’t tell you is that all the 50 bikes in this book are French, the reason being that the French were not just early adopters and innovators on a grand scale but developed a sophisticated, long-lasting bicycle culture.

Heine and Pradères went to visit bicycle collections in France and the US and selected— with a few exceptions for historically important bikes—the most original examples they could find of touring/long distance/city bikes made by constructeurs, in other words shops that build the entire bike with all/most of its parts and not just frames. Even original bikes will over time inevitably show modifications, especially in regard to tires and other consumables. Thus, a section at the end of the book addresses originality and calls out, for each individual bike, deviations from spec.

Cleverly, the Table of Contents is done as a visual index that shows a thumbnail (plus maker and year) of each bike. Models between 1910 and 2003 are covered in chronological order on 2–4 pages each. Of all the makes only Alex Singer is still in production. The text talks about not only the bikes but how they fit into their times, the people that made them, and, to varying degrees, technical and construction features. The latter aspect is intentionally kept to a minimum so as to give the splendid photos pride of place. (Readers who want to know more about the technology, or more history, have to look no further than Heine’s magazines or website.) Since the photos are not captioned the price to pay for this brevity is, inevitably, that the reader who doesn’t already know what they’re looking at may well miss something interesting. A photo may be worth a thousand words but even Pradères’ singularly intelligent photography only goes so far. As in other examples of his work he demonstrates again a keen eye for the subject, aided, surely, by the fact that he regularly runs a 1947 Alex Singer bike. His collaborator in this book is fellow Parisian Eric Svoboda, also no stranger to classic bikes. The bikes are shown from various angles and there are lots and lots of details shots. There are a few photos of the craftsmen and various sporting figures. Except for the period images all set-up photography was done in the studio and photo buffs will want to know that the photos were shot on film (mid-format negatives, not 35mm) which lends itself well to representing the different reflectivity and contrast of various surfaces.

If you’ve never given a vintage bicycle a second thought, let this book inspire you! For a few thousand dollars you can become the custodian of a pedigreed specimen of industrial art that can be used daily—and it’s just a mater of time until the Pebble Beach concours will have a class for it. Heine and Pradères have done a similar book on competition bicycles.