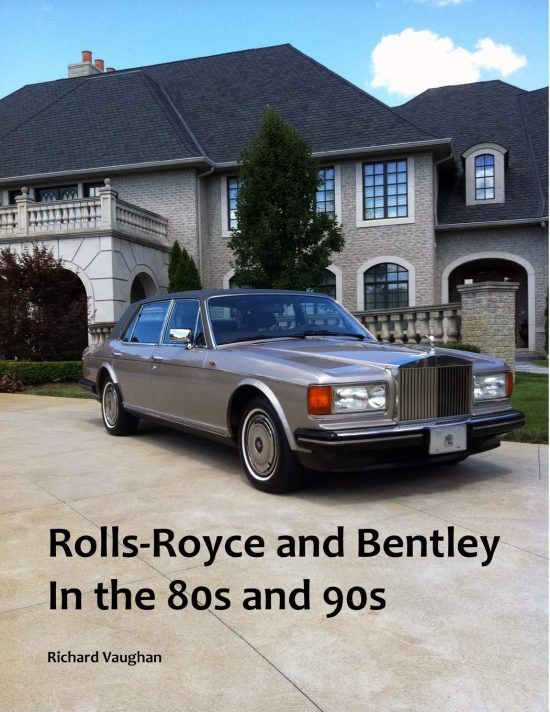 The last Rolls-Royce Silver Spur rolled off the line over twenty years ago. These cars today still look regal and contemporary. Thumbing through auction catalogs, eBay listings, Hemmings and the like, we find these cars are readily available. Often the prices are astoundingly low. Perhaps you are in the market. Perhaps you would just like to know and understand the Silver Spirit and its derivatives. Perhaps you are a keen Rolls-Royce enthusiast who wants as much information as possible about the various models, with their permutations, that the Rolls-Royce company has manufactured. This book, then, is for you.

Richard Vaughan, a professional automotive designer, is a long-time owner of a variety of Rolls-Royce and Bentley motorcars [1], and he is quite active in the Rolls-Royce Owners’ Club, among other things as the longtime editor of a newsletter pertaining to Rolls-Royces and Bentleys from 1965 on.

This is his fifth book on the modern RR/B, and there is some overlap/repetition in this one, both in information and in images. The foremost example from this book is that the chapter concerning the infamous Brunei cars includes much of what had been shown already in Brunei’s Bespoke Rolls-Royce and Bentleys.

But it includes much more. The book is generously illustrated with individual car portraiture, detail shots, advertisements, brochures, and in-factory photos. We especially like the beautifully rendered wash drawings reproduced from the marketing brochures. There is a brief history of the development of this series; a detailed, illustrated year-by-year listing of the Silver Spirit and Silver Spur refinements; a listing and description of all the SZ models; production figures; and chapters on the modern coachbuilders Jankel and Hooper who created coupe and limousine variations. Jankel also produced estate wagons, and these are shown and discussed. What might amaze the casual Rolls-Royce buff, and be most important for a prospective buyer, is a long chapter describing, in horrifying detail, the myriad of very costly difficulties entailed when purchasing, owning and/or maintaining an SZ model: “The most expensive car you can buy is a cheap Rolls-Royce or Bentley,” is a lesson too many learn too late, at their peril.

Some surprises are found throughout the book: vinyl seats in a Rolls-Royce? A Park Ward Limousine badged as a Bentley? We also learn that the last batch of Silver Spurs were manufactured, in 1999, alongside the successor model, the Silver Seraph—and “they sometimes lacked a few features because the factory had literally run out of a few obscure parts.” And it is disturbing, nearly painful, to read of the surprising number of design and manufacturing problems that beset the SZ series during its lifetime. These are Rolls-Royce motorcars after all.

We would have appreciated an index and tighter editing, but, overall, we are generally pleased with In the 80s and 90s. The über Rolls-Royce enthusiast will bemoan the lack of chassis numbers. Typos are found throughout, and some are disconcerting—but we couldn’t help chuckling over our discovery of the rare Silver Wrath II (instead of Wraith) model. Recommended.

Faster »
« Taking the World by Storm