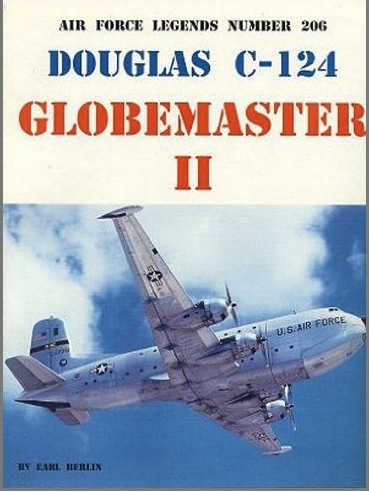 When the mammoth C-5 Galaxy airlifter entered service in 1969 it pretty much relegated all that remained in the turboprop arsenal from the C-124 era to the scrapheap—except the C-124 itself. First flown in 1949 the Globemaster II still would have had a role beyond its 1974 retirement that only it could fulfill really well, if only its tired wings weren’t getting stressed. It wasn’t just the weight it could carry but rather the volume; its predecessor, the C-74 Globemaster, a very large plane for its time, was usually stuffed to the gills long before it reached its weight-carrying limit. With its twin “bug eye” pilot canopies (later one) perched atop the sleek fuselage, that graceful aircraft looked like it had been designed by an aerodynamicist whereas the C-124, which is a refuselaged C-74, looked as if a bunch of cartoonists had sniffed too much solvent. Nicknamed Old Shaky, this double-decker retained the C-47’s wing, tail surfaces (slightly modified) and engines, and was given gigantic clamshell nose doors and an aft-mounted elevator to gobble up its 68,500 lb of cargo.

On the ground it looked positively ungainly, especially when propped up by a tripod at the tail to keep it from tipping. But wherever it flew, it was a welcome sight, especially on those fields that were unprepared and could not have accepted any air traffic except maybe a C-130 Hercules which couldn’t carry nearly as much cargo. In all regards, then, a formidable aircraft, but not nearly as well known today as it should be. And that’s why U.S. Air Force veteran Earl Berlin stepped up to spend ten years of his life researching a plane that he never even worked on during his 21 years in the service.

As a former tech school instructor, Berlin obviously has a sense for paring down the subject matter. That this book looks the way it does probably has more to do with the publisher and their approach. Steve Ginter Books has a long list in its two series, Naval Fighters and the newer Air Force Legends into which this book falls. Ginter himself is an author and won the Admiral Arthur W. Radford Award for excellence in Naval Aviation History and Literature. His books are no-frills productions aimed at the serious aviation enthusiast and the aviation modeler, and they cover many offbeat aircraft. This, then, is an audience that doesn’t need glittery fluff books but hard data. There’s no Table of Contents, no Introduction, no Index. Just the fact, ma’am. The books are heavy on such minutia as cockpit detail, line drawings, close-ups, squadron insignia, paint schemes (the photos are b/w so the captions describe it), and reproductions of pages from the actual flight manuals. Anyone may submit aircraft photos of pretty much anything to Ginter who will archive them for use in future projects. Many of the photos used (all are credited) in a book are therefore new to the record.

Between the comprehensive illustrative material and an author’s text there thus emerges a many-faceted, reliable, reference-level treatment of an aircraft’s developmental and operational history over the length of its service life. Berlin does just that for the C-124. Beginning with a look at the tactical picture and military requirements and a summary of large-capacity military and civilian airlifters gives the reader a proper understanding of the expectations for this particular aircraft and if and how it fulfilled them. Testing protocols, mission profiles, performance data and modifications, sometimes pages-long first-person accounts of flight personnel, serial numbers, survivors—everything that is relevant is touched upon, even if only briefly. One could easily see the wealth of material in this one slim booklet be expanded into a book four times its size (and price)!

Two closing pages describe three scale model kits (some of the detail tech drawings elsewhere in this book are in 1/144 scale so modelers can use them to make their store-bought or scratch-built models more accurate).

This is a fine book in a fine series and still in print.

Formula One at Watkins Glen: 20 Years of the United States Grand Prix, 1961–1980 »
« Inside the Paddock: Racing Car Transporters at Work