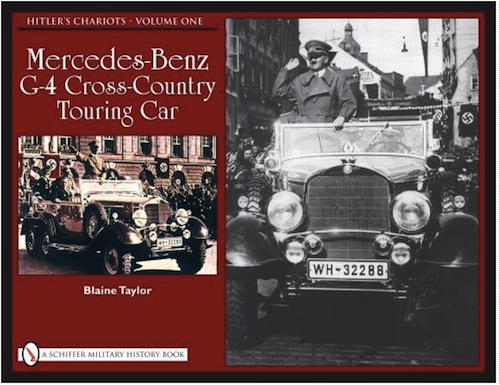 Among the several six-wheeled vehicles produced for cross-country use in limited numbers between 1934 and 1942 by various makers (Mercedes-Benz, Horch Krupp, Tatra, Skoda), the Mercedes Type G4 was German Chancellor Adolf Hitler’s car of choice when he couldn’t or didn’t want to use his other Merc, the 770K parade car. “I would rather die standing up in a Mercedes than hide away,” he said after a 1938 assassination attempt while riding in his limousine.

Mercedes Benz began its development of 3-axle cross-country cars for the military and other governmental use with the G1 in 1926. Introduced in 1934, the lightly armored 8-cylinder 5–5.4L G4 was never offered to the public and throughout its 9-year run was continually modified, improved, and rebodied. Thanks to its association with Hitler and his staff, it is widely photographed and recognized, and even had a film career on the US TV show Hogan’s Heroes and several international war movies. But, confusion exists, as do replicas and fakes, and a book sorting it all out would be a good thing.

Billed as “the first ever illustrated study on the often photographed but never fully explained mechanical marvel . . .” this book is more of a somewhat random scrap book than a proper “study” and rather too superficial in regards to explaining any mechanical marvels. Before exploring this further, a few words about the author are in order.

Taylor (b. 1946) is a retired, and decorated, US Army vet (199th Light Infantry Brigade, Vietnam) with a BA in History who became a civilian Army employee, a medical journal editor, an advertising agent, a press secretary to former U.S. Rep. Helen Delich Bentley, and ran (unsuccessfully) for both the U.S. House of Representatives and the Maryland House of Delegates. Already in the late 1960s he began searching The National Archives and The Library of Congress for old photographs—there’s a theme here: an interest in history, and he has published on it a lot. And, he says, he’s got another 50–100 illustrated histories in him—if he lives into his 90s. His apartment is crammed with file cabinets stuffed with indexed research materials and photos from which have sprung probably thousands of newspaper and magazine articles on various topics in the last three decades. (He’s even prewritten his own obituary, just so that the facts don’t get jumbled by someone else.) He’s been a consultant to The History Channel for shows about vehicles of the Third Reich. Long story short: the exclusive priorities in his life are researching and writing his material and getting it published, and he has become a veritable recluse in pursuit of them.

Such focus should result in, and be rewarded with, work of extraordinary depth. Why, then, does this book seem wanting? Taylor is well regarded as a photo researcher of the World War II era, clearly has a passion for history, can express himself in writing, and is well read. Photographically, this book is indeed rich in what it offers but flawed in the quality and scope of fact and the overall organization of the material. To illustrate, let’s review some examples from just the first 20 pages:

Such lack of attention to detail does in no way detract from the positive aspect that a great number of photos are brought together here, some just possibly for the first time, but it is disconcerting to the reader who expects reference-level bulletproof material.

The book begins with a look at the place of Ferdinand and Ferry Porsche on the automotive scene and the elder’s role in WWI military projects, WWII tanks, and specifically the connection to the G4. While this chapter nominally runs to 37 pages, only 4 pursue this line of inquiry whereas the rest contain photos, few of which are specific to the Porsche topic and could have occurred anywhere in the book. None show the G4 during design or construction and there is only one illustration of an unbodied chassis. While this section does contain several good photos of a number of models (including the only closed-body radio van version) most show Hitler striking poses. Others are totally off-topic, such as Hitler’s secretary getting married or his chauffeur petting a bear cub. Interesting, sure, but a dilution of what little focus there is. All the illustrations are b/w and the occasional reference to paint schemes lacks clarity/consistency, meaning that even modelers or restorers who would be a prime audience for this book will not get their questions answered.

In the same vein, subsequent chapters illustrate in chronological order operational use of the G4 in various theaters of war. The text makes frequent and extensive use of quotes from other works, including the author’s. Technical specs are sparse and built into the text; there are no tables, charts, or the like. Bibliography, no Index.

This is Taylor’s eighth book and the first in the Hitler’s Chariots series.

T.E. Lawrence in War and Peace: An Anthology of the Military Writings of Lawrence of Arabia »
« AMARG: America’s Military Aircraft Boneyard