A History of Hudson And Its Nine Most Fabulous Cars 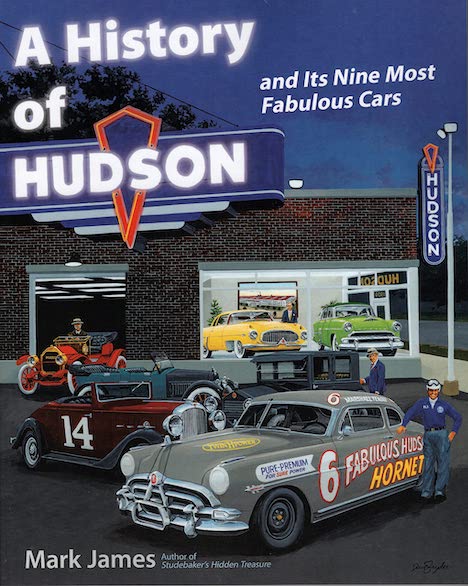 Hudson was a promising, growing, producing company from its very 1909 beginnings. It was, in fact, at one time one of what we now refer to as the “Big Three” behind Chevrolet and Ford. So, what happened? Why did Hudson close for good in 1954? A History of Hudson and Its Nine Most Fabulous Cars will take you on Hudson’s 45-year roller-coaster ride.

Mark James’ writing is succinct and on point thus enabling him to present the entire Hudson Motor Car Company history in a most complete way within the confines of this modest-of-page-count book. He admits that while reading and researching that he “. . .became hopelessly lost in a tsunami of names, dates, production figures, Hudson income and losses, and more.” To help himself keep track he created a graph and subsequently had a graphic designer make that graph comprehensible by everyone and thus publishable. The graph is this book’s two-page appendix.

From the length and depth of the book’s Bibliography, it is obvious Mark James left few, if any, stones unturned in his reading and research prior to writing. Moreover he’s created a very thorough Index so that you, his reader, can easily revisit particular passages or find information again.

While Hudson produced numerous models over the years, James has selected nine models he believes were the most noteworthy designs to carry his narrative that include the first model built in 1909 and introduced as a 1910 named the Twenty Roadster, and the last, the Italia, in 1954. Four of those he deemed most noteworthy were produced in the company’s first quarter century coinciding with good sales, thus good earnings. Those years saw the growth of the Essex line of cars from Essex to Essex Coach and Essex Terraplane.

Of course Hudson’s car production halted along with the rest of the industry during World War II. Hudson’s Detroit plant was actually expanded to encompass three million square feet of floor space on its 80 acres where, by war’s end, in excess of 20,000 were employed making 20 mm anti-aircraft guns, piston and rocker arm assemblies for Wright engines, B-26 rear fuselage sections, Hall-Scott Invader marine engines for landing craft, as well as parts for P-38s, P-29s and P-63s.

Postwar, Hudson brought its innovatively passenger-accommodating and comfortable step-down designed cars to market. But with, as history would prove, the wrong executive at the top, the momentum and popularity of step-down type cars weren’t permitted to keep pace with exterior freshenings more in keeping with what the buying public wanted. That exec, a well-liked and respected man—cultured and politely considerate but overly cost-conscious and totally risk-adverse—was Edward Barit. So despite the Hornet and Jet joining Hudson’s offerings, Barit had nixed any styling changes thus Hudson’s stodgy appearances didn’t attract buyers.

Even the last-minute merger with Nash, forming American Motors, couldn’t and wouldn’t save Hudson. May 1, 1954 it simply ceased to exist as Mark James chronicles on the pages of his A History of Hudson. Whether you want to learn about Hudson or are seeking a refresher, this fast-paced concise read is worthy of your consideration. The cover illustration is by Dave Snyder, a former professional ad man with a passion for transportation history whose work is known for great fidelity for detail.

A History of Hudson And Its Nine Most Fabulous Cars

SuperFinds: A Truly Unique Selection of Previously Unseen Photographs of Important Historic Cars As Found in the 1960s And 1970s  »
« Bravo, Stanley!