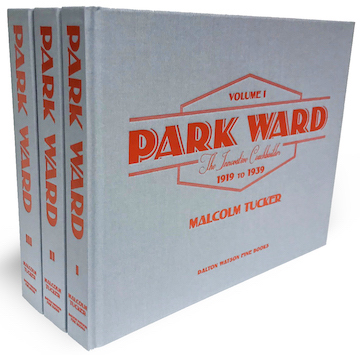 It’s a good time to be alive: Park Ward is a hundred years old this year but only now do we have here the first proper book about it, so thorough that it is also likely the last.

It covers only the first twenty years of Park Ward’s history but takes over 1200 pages to do so. On a straight-line chronological basis, that would be sixty pages devoted to each calendar year, but that is not the way it is laid out. Expansive as it is, Tucker is the first to say that it cannot be complete—not for lack of trying but because so much data had been squandered by people in ages past. Which, if you think about it, is probably the reason no one had ever tried to do a book of this magnitude.

Now part of Bentley, PW is of course still around, in the form of Mulliner Park Ward, but the book “only” goes up to 1939, the year in which Rolls-Royce had taken a controlling interest and the last full model year prior to the outbreak of World War II and the cessation of vehicle production for private use “for the duration.” That Rolls-Royce/Bentley coachwork would amount to some 90% of PW output at that time is all the more remarkable if you consider that they were not initially Rolls-Royce’s favorite coachbuilder. (Tucker, incidentally, is certain that there is no sure proof of the long-held notion that RR had already bought into the firm, on cash-strapped PW’s initiative, in the early 1930s.) The origin and business sides of the story are plenty interesting and of course related here, but the meat of the book is the coachwork on Rolls-Royce/Bentley (>3000 bodies); other marques (>1000 bodies) are included as well.

It’s hard to imagine that a book as specialized as this would have a “casual” reader/browser (collectors/completists, yes, but those folk often don’t even take the shrink wrap off!) so some words of explanation (which the book itself does not offer) for the sake of the power user as to how it all works are called for.

The key to Rolls-Royce/Bentley cars is the chassis number, and while Rolls-Royce was singularly meticulous in recording and preserving it, their methodology was neither consistent nor intuitive. Say you have a 20/25 chassis with a GAF prefix; you’d be wrong to assume that GAE came before it and GAU after (GFE and GSF do, respectively) which puts an author in a pickle: a story about design is best told in chronological order, not in alpha order of chassis number, but that then requires the reader, especially the one new to this, to figure out on his own where to look—which would be easier if the book told you to do that, and how. To be sure, there really is no “right” way to do a data-intensive book like this; the reason for dwelling on this at all is to impress upon the reader that everything is there—Tucker has written too many books and, more importantly, uses too many books just like this one not to consider how readers at different levels of pre-knowledge approach a book—you just have to look for it, especially in the 20-page alphabetical Chassis Index in Vol. 3 about which more later.

The books are in landscape format which lends itself to showing large photos, and without crossing over the gutter which would obscure the very detail and spatial relationships that are critical to “reading” coachwork. That the contents is divided into three volumes is dictated by practicality: weight and size (24″ wide fully open). Vols 1 and 2 are split so as to achieve a more or less even page count but Vol. 3 is clearly a stand-alone volume so that its data sets can be consulted while having one of the others open at the same time instead of paging back and forth within any one volume in order to cross-reference something. Obviously you’ll want to be doing this at a table and not in your lap—balancing a drink on one knee!

This is a Dalton Watson book so state of the art image reproduction of photos, ads, and realia is a given. The books are profusely illustrated; it is worth pointing out to students of coachwork that bodies on RR/B were subject to a limitation that applies to almost no other marque and certainly not consistently over decades: the carmaker required of the coachbuilder, always, on pains of forfeiting the chassis warranty, to not alter the iconic trademarked—and very upright—radiator shell. This in turn influences hood height, fender lines, wheel openings, door shapes etc. etc. You only have to compare PW work on other marques to appreciate how this dictum affected a designer’s choices—even if it achieved the carmaker’s prime objective: make a Rolls-Royce/Bentley recognizable at a glance. 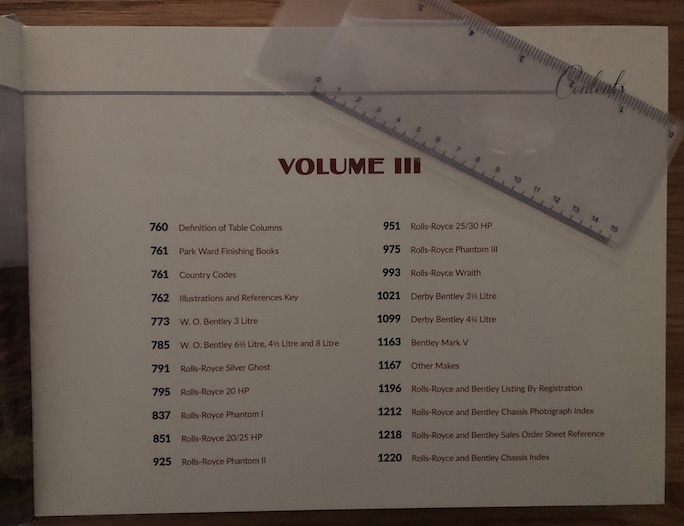 What makes this magnum opus a reference book for the ages is the tremendous quantity (and integrity) of factual information presented in Vol. 3. Readers in the RR/B world will of course be familiar with Bernard King’s “Complete Classics” series. The reason Tucker’s arrangement of the data looks so similar is that King made his research available to Tucker who then sifted out the PW-related bits and built on them. The information displayed appears to be identical to King’s approach, or nearly so, with only the order of the column titles being slightly rearranged. A notable exception is the inclusion of separate sections at the end of the individual model listings, where appropriate, of chassis that were not originally fitted with Park Ward coachwork but were rebodied at some point with either a new Park Ward body or one that originally came with a different chassis. Anyone researching the history of any particular car is going to find useful information here, and often there are references to other publications that indicate chassis-specific photos and illustrations.

All these referenced publications are conveniently indexed at the front of Vol. 3 and constitute a virtually all-inclusive bibliography of illustrated works on Rolls-Royce and Bentley for the 1919 to 1939 timeframe. Many of those listed will be familiar to serious enthusiasts of the marques with a well-stocked library but there are also some less well-known items. Human curiosity being what it is, these tantalizing clues may spur readers on to embark on more detailed research their own. If such quests result in the unearthing of data not currently known, Messrs. Tucker and King will feel their mission has been accomplished.

All those piles ‘o data in Vol. 3 can be hard on the eyes—which is why the publisher is including a plastic magnifier! To keep that volume from looking like the phone book or an actuarial table it has been spiced up with something delectable indeed: over 700 quarter-size facsimiles (magnifier to the rescue!) of Sales Order pages, in color, from PW’s Finishing Books, shown below. Who among us has seen those, eh?

The magnifier is particularly useful in deciphering the cursive handwriting in those books which were surely maintained by different clerks with differing penmanship. With diligence and magnification, most entries can ultimately be understood, though in many cases this is no easy feat, even with knowledge of traditional coachbuilding terminology. At the very least, the magnifier can serve as a unique bookmark, substituting for the silk bookmark ribbon normally found in a DW book and others of comparable quality/price. Other goodies include a series of articles written in the 1950s by the son of company founder Ward and a host of print ads from contemporary magazines and flyers.

That it took Tucker only four years to write this outstanding opus is remarkable; as so many of the current and the old Dalton Watson books it’ll become a companion and benchmark for a lifetime.

Also available in an Anniversary Edition of 20 copies ($500, already sold out) and a leather-bound edition of 10 ($1600, can be customized to match car spec etc.) each in a different type of solander box. Here’s to hoping it quickly becomes a sell-out of all three editions in order to encourage author and publisher to continue with the post-1939 story!