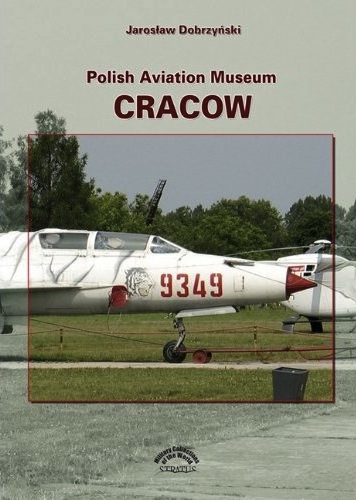 In 2010 Poland’s only aviation museum added a new building in the shape of a three-bladed propeller. You’d think someone would have had the presence of mind to put an aerial photo of something this unusual into a book that appeared that same year. Easy enough to do, considering that the museum grounds on the old Rakowice-Czyżyny airfield are still in active use as a heliport. In fact, the Cracow Police helicopters are based here. But, no, not even a plan view—you’ll just have to go see it for yourself. And visit you should, even if only via the pages of this book. The whole purpose of this publisher’s new series, Military Collections of the World, of which this book is the first, is to (a) bring the museum to people who can’t see it in person and (b) provide a reference-level documentation of a museum’s holdings. (The next book will be on the US Army Ordnance Museum Aberdeen.)
The museum was founded in 1963 on grounds that are steeped in history. In continuous operation until then since the end of the 1800s the field staged military balloons and was a stop on the first scheduled airmail service in Europe (1918, Vienna–Kiev/Odessa), pilots were trained and aircraft built here, and various forces used it during both world wars.

Even general-interest readers will know of Polish aviators participating in the Battle of Britain. And there are of course exhibits about that here (but not very many). You really have to be a bit of an aviation connoisseur to fully appreciate the rare and unique items found here—and only here. First and foremost would be the now extremely rare WW I airplanes that once were part of the personal collection of Hermann Göring, the Commander-in-Chief of the German Luftwaffe who had been a fighter ace in WW I. During WW II they were evacuated from their museum in Berlin to save them from Allied bombing. Severely damaged, most were partially restored here at Cracow but many are still missing their wings. Ever seen a Roland? a Halberstadt? or a Geest Seagull? Then there’s the Russian Grigorovich M-15 flying boat, or the only surviving Polish prewar PZL P.11c, or the unique Me-209V1 world speed record aircraft from 1939. And more, more, more. All rarer than hen’s teeth. Not so much rare than unusual would be the PZL M-15 Belfegor jet-powered cropduster biplane.

After a brief history of the airfield and the museum, including a section on the above-mentioned new building, the book describes the aircraft by period, which also corresponds more or less to their arrangement in the museum. Each craft is covered on one page, with some text and several photos. The text gives basic history and vital stats along with some commentary as to how the item came to be in the museum and, if applicable, what work was done to it here.

In a way the book is better than the museum because it is in English (not always textbook-perfect but fine; the author did the translation himself) whereas the museum does not have consistent or exhaustive signage in English. What photos in a book cannot do so well is, for instance, convey an adequate impression of row after row of MiG jets. It’s not just the quantity—probably the largest collection in one place—but their decaying, weather-beaten appearance in a grassy outside area where, at the right (wrong?) time of year some of the planes are knee-deep in weeds. This area also houses passenger and transport craft and helicopters. Curators and preservationists will probably shudder at the thought of unprotected outdoor storage. Poland does have a moderate climate (Cracow latitude: 50° 4′ 60 N, longitude: 19° 55′ 0 E) with both maritime and continental elements but this is not, say, the dry Arizona desert with its world-famous AMARG, and especially the summers in Cracow are conducive to rainfall!

In addition to the above, the museum has—and the book shows—an essentially complete collection of all airplane types developed or used by Poland after 1945 and all sorts of non-Eastern Bloc gear. One section, fittingly titled “You Don’t Know Your Own,” presents craft from the pioneer era in original as-found condition and Polish postwar prototypes. The museum also owns the world’s largest collection of aircraft engines from 1908 to the present, including a V-2 rocket motor. The book coverage of the engines is a bit unsatisfactory: they are not shown in any discernible order (year or maker or type) and they are photographed in situ, i.e. with lots of visual noise behind them obscuring their features. A photographer’s backdrop would have worked wonders here.

There is no Index because the Table of Contents already lists each individual exhibit. Unless you are an aviation supergeek, chances are there’s much new to discover here!