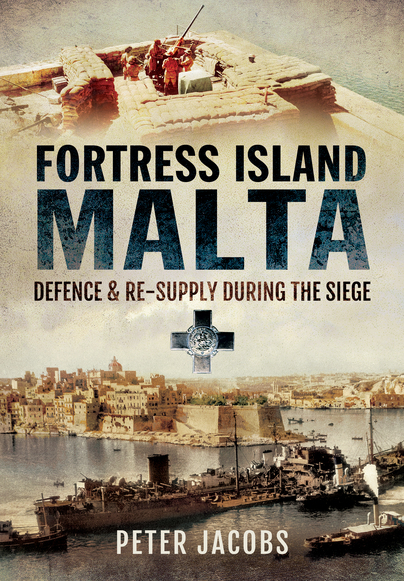 “The introduction of Italy into the Second World War on the 10th June 1940 signalled the start of the siege of Malta, the longest in British history and for the next two and a half years the Axis powers did all they could to batter the small island into submission.”

This fine book tells the story of the sustained campaign to wreck Britain’s supply line to North Africa by conducting not only sustained and vicious air campaigns against the island but also aggressive attacks on British convoys trying to supply Malta by sea. Britain’s key bases in the Mediterranean consisted of Gibraltar at one end, Alexandria and Port Said in Egypt at the other, and Malta with its deep natural harbor at Valetta in the middle.

The story is vast and full of detail charting the early days of a meagre defense of the island when Italy joined the war in June 1940 by slow and obsolete Gladiator biplanes trying to fend off seasoned fighter aces in Hurricanes and then Spitfires. The book tells of the huge risks in getting these planes to the island in the first place which resulted in the destruction of the aircraft carrier HMS Ark Royal (with pilots also having to fly long range to the island initially in Hurricanes fitted with external fuel tanks) to the huge Pedestal Convoy which set off in August 1942 to supply Malta with fuel and staples which resulted in the loss of over 350 lives and a dozen ships from a sustained attack by both air and sea by axis forces. The book describes the oil tanker Ohio limping into the Valetta port with its back broken under escort from tugs still able to discharge the majority of its cargo. The story of the Pedestal Convoy is probably the most dramatic in the book.

The book makes clear the great toll it took to keep this small but strategically vital island from starvation. It makes clear just how close the residents of the island were to the brink as well as the heavy cost in both life and equipment in defending the island, the most dramatic being the loss of the aircraft carrier HMS Ark Royal. The story is one of sustained struggle against very high odds, of extreme guts and fortitude, against the backdrop of the ebb and flow of the tides of fortune in the war in North Africa.

It is however the description of the defense of the island from the air that provides the most dramatic story of this book. The Axis powers tried all they could from the earliest days of the siege to try to bomb the island into submission and deplete it of supplies. The start was not promising as the defending aircraft were obsolete. At the beginning the air defense fell very much to Hurricane fighters and it was only later that the faster and more nimble Spitfire was deployed to Malta at great risk by sea. The book gives great insight into the characters of the pilots and two in particular, George Beurling and Adrian Warburton, are shown as unorthodox and slightly eccentric characters, very much lone wolves but ruthlessly effective in defending the island. One is also made aware of just how young some of the fighter pilots where, many of them still in their teens.

In terms of the style of the writing of the book I have very little complaint. The author has obviously carried out a prodigious amount of research and has to cram a lot of detail into a book that only runs to just over 200 pages. The events are mostly well described with lots of quotations from eyewitnesses and primary material from the British National Archives as well as a wide variety of secondary sources

There is also a personal touch in the form of a diary of the author’s father, a stoker on one of the destroyers helping to defend the supply convoys. Occasionally though the book does slip into dryness with just a bare recitation of the facts and one sometimes wishes for more dramatic and exciting prose to convey the full drama of the events being described. This does not hamper in any way the fascinating story being told or undermine the amount of research that has gone into the book. The only other thing I would mention is that I would have liked more information on how the population on Malta and also the home front dealt with the siege and the conditions they had to put up with.

The book is a handsome hardback with a beautifully designed dust jacket and printed on nice glossy paper with a wealth of b/w photos in the middle of the book that give a good idea of the drama and intensity of the siege. There is also an extensive Bibliography at the back of the book for anyone who wishes to carry out further reading. In all, I would say that this is an excellent resource for anyone who wishes to find out more about the tactics and drama of keeping Malta supplied during the Second World War. It is a well researched and beautifully produced volume and deserves a place on bookshelf of anyone with an interest in the Second World War.

Posted Under: Other Genres | Author: Matthew Bodycombe | No comments yet