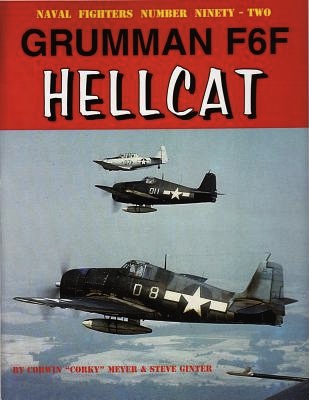 “Grumman will only build an easily produced, maintained and reliable combat aircraft that can be readily mastered by a 200-hour, war-time pilot trained to fly from a carrier, engage in successful combat, sustain combat damage, return to the carrier, and land his aircraft after dark so that he can be available for combat again the next day.”

Does the world really need another book on the Grumman F6F Hellcat? Prior to the arrival of this book on the doorstep, I might have been inclined to say, “No thanks.” However, after reading it, I have definitely changed my tune. I am delighted that the publisher recognized its value and that it will grace the bookshelves of anyone interested in not just Naval aviation, but fighter aircraft in general.

The title of this book should really be, “Just About All You Wanted to Know About the F6F Hellcat, But Were Afraid To Ask.” This is a book literally jammed from cover to cover with information, insight, and illustrations. There is scarcely a spot from the inside of the front cover to the inside of the back cover that is not utilized in an effort to provide the reader with something relating to the Hellcat. The first 80 pages are given to first the thoughts of a former Grumman test pilot regarding the Hellcat and then a review of the Hellcat variants and other relayed information. The remainder of the book is devoted to a chronology of the Hellcat’s service career and then information such as a listing of the aces who flew Hellcats—which is a long list!—and then its postwar career and other odds and ends.

I will admit that my initial glance at the book did not produce much in the way of hope, given that it just seemed to be, as noted, crammed with no end of material. However, once I sat down and began to read, I found that this was not a problem. The layout and the format absorbed what might have otherwise been an unruly mess.

Corwin “Corky” Meyer joined Grumman in 1942 and served as a test and project pilot for the company for several decades. In addition to the Hellcat, Meyers test-flew the Tigercat, Bearcat, Panther, Cougar, Tiger, and the Super Tiger. Meyers was a contributor to other volumes in this “Naval Fighters” series (of which this is vol. 92) that covered those aircraft. With his death in 2011, an invaluable link to the past was severed.

Of course, the question as to why it took so long to get to the Hellcat crosses one’s mind when considering this excellent book. Whatever the reason may have been, it was worth the wait. One can sit down and roll through the book or, as I found myself doing, dipping into it time and time again, always finding something interesting to read and consider regarding this important aircraft.

To say that the book is “profusely illustrated” is an understatement. It is crammed with no end of photographs, more than a few unfamiliar ones along with some that are staples in any tale regarding the Hellcat. The captions tend to be as informative as the text and placed so as to support the topic or period being discussed, which, alas, is not always the case with such books.