Journey to the West

A Great American Adventure on the National Old Trails Road, A Novel 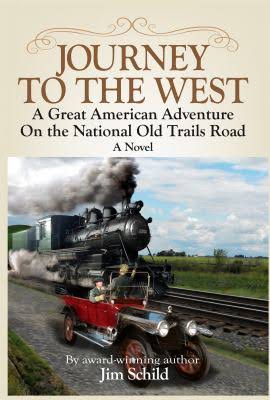 Life can and does have its moments of seemingly improbable synchronicities. However, they may not occur to quite the degree or with the frequency of the story told on this book’s pages. Thus, reader be forewarned; while locations and events match history, suspend reality as you travel along the pages of Journey to the West for it is, as is included as part of the subtitle, A Novel.

Author Jim Schild is no stranger to automotive writing or self-publishing either although this is his first attempt at writing fiction. His own publishing company’s name, Auto Review, is itself part of history.

The original The Auto Review was published from 1906 up to and including December 1923 by the Saint Louis, Missouri auto dealer’s group as it was their official magazine. Schild himself revived it as a quarterly from 1988 to 1990. Thereafter he used the name and logo for his own book writing and publishing concern which has, to date, published and marketed nearly 30 books and publications including this newest, Journey to the West.

A quick synopsis of Journey’s storyline: The year is 1915. Brothers Jim and Jack, scarcely out of their teens, drive a two-year-old Peerless 6/48 Touring from New York City, joining the National Old Trails Road at its Baltimore, Maryland origination, and continuing along it to San Diego, California. At practically every pause or stop they “just happen” to meet someone special or attend a notable event.

Some examples of these happenstance encounters include finding Cannonball Baker at a refueling stop and conversing with him; meeting Orville Wright in Dayton, Ohio and he just happens to invite them to camp that night in his hangar and then takes them flying the next morning. Indianapolis is next with arrival timed to attend the 500 where they not only meet, but are taken under the wing of no less than Ralph de Palma who, of course, would win that year’s race and invite Jim and Jack to join him in Victory Lane.

Other adventures and other personalities the lads encounter as their Journey…West continues include emulating the still-in-the-future Bentley Blue Train legend with the brothers pitting their Peerless against a 2-8-2 locomotive featured in the cover art of the book. In Kansas City they encounter two teenage boys named Roy and Walt (think the future creators of The happiest place on earth) and have lunch with Harry Truman.

And so the story continues and pages turn until Jim and Jack reach their San Diego destination with arrival coinciding with the opening of The Panama California Exposition. They tour its exhibits and see the stunning architecture of the buildings, many of which stand to this day in San Diego’s beautiful Balboa Park.

And the international exposition offers another opportunity for Schild to write-in yet another synchronicity. The brothers meet a well-traveled man who tells them of a Chinese “folk tale written by Wu Cheng’en” that was published during the Ming Dynasty. It relates the story of someone who traveled to western parts of China meeting fascinating people along the way. The translation of its Chinese title into English is—A Journey to the West.

While the improbable sequence of events may become problematic for an adult reader, it’s the “stuff of dreams” for youthful Young Adult readers, especially ones who may be fledgling automobilists. This book may, indeed, be an exactly right book to entertain and further entice and encourage their developing automotive interests.

Journey to the West

A Great American Adventure on the National Old Trails Road, A Novel

Posted Under: Fiction | Author: Helen Hutchings | No comments yet

Wave-Off! A History of LSOs and Ship-Board Landings »
« Lotus Elan: The Complete Story