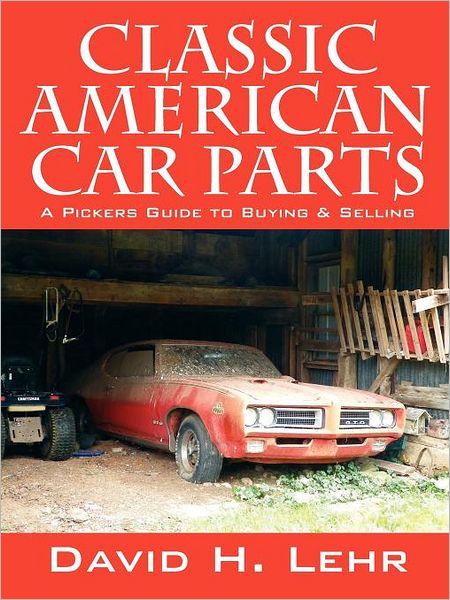 “I like to get a good deal but there is a moral issue here. This is where I draw the line between getting a good deal and cheating people. There is a ‘line’ and if you cross it often your luck is going to run out on other future deals. I don’t know how or why. It just does.”

Well, think about that statement what you will but if author David Lehr can be serious about that and still make (sometimes!) 1000% profit, he must be doing something right. Now you can too, thanks to his self-published book. He’s been a full-time picker and dealer since around 2000, specializing in American cars.

Growing up in rural Pennsylvania, Lehr developed early on an interest in machinery. While this is totally common for American youths, his case may have been a bit more extreme: “I used to drive my school bus driver crazy because I sat behind him and made car engine noises while he drove.” He also had the entirely common experience of always being short on funds to finance his newest automotive adventure (a 1967 Camaro SS/RS at age 17—if he had kept that and sold it in today’s market he wouldn’t need to write this book!). All the way into adulthood he found that buying cheap scrap parts or even entire cars to part out and sell put spare coin into his pocket and kept his own car/s humming. So, when his day job at an Alcoa mill was slated for elimination, he turned his parts hobby into a full-time occupation and started a backyard chop shop.

Written in a down-to-earth style (and with many typos), his book both benefits from and is limited by the specifics of his particular situation (location, interests). As to the former, having made mistakes and learned from them means you, the reader, can spare yourself the trouble of making the same ones yourself. As to the latter, his focus is on American iron of the 1960s and ‘70s and even within that narrow segment is further pared down to “popular but less collectable cars.” Aside from that, his comments about how and what and from whom to buy, when and where to sell, how to price, swap meets vs. eBay etc. have universal application no matter his, or your, specialization. He, in fact, even enumerates the pros and cons of being a generalist or a specialist. The fact that he is one and not the other has nothing to do with personal preference but his understanding of and access to the market. And with knowledge, which brings us back to the opening quote: the picker/dealer needs to know an awful lot about pretty arcane stuff in order to be one step ahead of sellers—and other dealers. The only reason there may be thousand-fold profits on the table is that one party to the transaction knows more than the other. Ignorance, in this job, is not bliss.

On the one hand, much of what Lehr sets forth is, or should be, common sense. Then again, even the obvious things may need explaining. Which parts sell? Who are the buyers? How does the part get to them? Is there more money in selling a motor complete or with all the ancillaries removed? A key point he makes is especially applicable to the type of parts in which he deals: know parts interchangeability. Buying an unpopular under-the-radar parts car cheaply but knowing that some of its parts fit other, more desirable makes or even years in the same model range means you can market the parts to that more lucrative end of the market and increase your profits. Lehr lists his top picks and losers, value scales, code decoders, even the important books in his library. In those regards, the book is very specific—but only relevant to you if you have the same personal or business interests.

Even if only a fraction of what Lehr offers here fits your specific situation, the book should pay for itself quickly. And even if you have no need or interest in becoming a picker/dealer but are simply a consumer of parts, his comments about the seller-buyer dynamic and deal-making can be eye-openers!