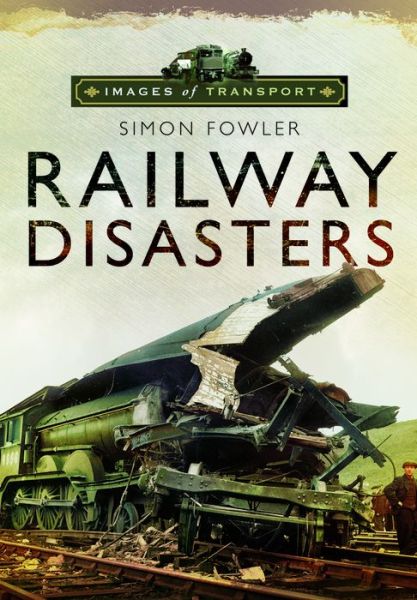 “American railway operators mocked the British counterparts’ indifference to safety. The London correspondent of the New York Times in the 1870s wrote: ‘If the choice lay between going safely at a moderate speed, or going fast with a good chance of being killed, most Englishmen would unhesitatingly pronounce for the latter.’”

Who’d have thunk that the Brits have such a hankering for speed at all costs? Well, this book is chock-full of photos from 1829­–1968 of British railway accidents large and small, famous and forgotten. One foreign incident is included, probably because it yielded “the most dramatic photograph of a railway accident ever taken”—remember the scene in the movie Hugo where a train pulls into the station, jumps the track, goes flying out the window, and comes to rest two stories below on the street? Gripping stuff. Especially when it happens in real life! The photo is right here in the book: Montparnasse Station in Paris.

The basic premise of the book is that we learn from accidents. That, in fact, if it weren’t for accidents, we wouldn’t know what needed improving. This is often enough true, certainly in the early days when few things were tested, or could be tested, and certainly nothing could be safely modeled on the almighty computer. Think of flimsy, bendy metal; flammable wood and fabric everywhere; open gas flames for lighting and heating; roiling steam in constantly stressed boilers—and that’s just the hardware! Add to that the human factor—fatigue, absentmindedness, stupidity, taking shortcuts—and you don’t want to set a foot outdoors. (But: most accidents happen at home . . )

Fowler was for many years an archivist at the Public Record Office (now The National Archives) which is probably ideal training for someone who likes connecting data points. He has written extensively on transportation and family history subjects

Divided into four eras, the book tells its story mainly through photos. A fairly wide-ranging Introduction touches upon the organization of the railroads, their oversight, safety concerns and devices, signaling, construction methods, insurance and the like. At the end of it, you’ll probably concur that, all things considered and factoring in the large quantity of goods and people hauled and miles traveled, the railways are pretty safe. And then the photos start.

The earliest incident described actually dates to 1858 not 1829 as the chapter title would indicate. There’s usually one photo, drawing, or reproduction of a news report to a page, with a caption or other explanatory text next or near it. The text may be brief but it is specific and relevant. Fowler rightly draws attention to the vast number of spectators, including children, milling about the accident scenes.

Readers who already know a bit about some the more in/famous disasters, say, the 1879 Tay Bridge accident that killed all everyone on board during a violent storm may find the coverage a bit too scant in terms of background or causes etc.— but there’s only so much a 120-page book can cover! Besides, this book is part of the “Images of Transport” series so the emphasis is on images, and on that count it is entirely satisfactory. Looking at all that mangled metal is sobering enough but at the very end there’s also a photo of a 1952 Metropolitan Police report listing recovered artifacts at the scene of the worst UK crash yet. You simply cannot read this without sorrow: “8 keys on ring”. . . “One packet film prints”. . . “One dry cleaners slip No. 24735” . . . “One season ticket in leather holder” . . . These folks had things to do and places to be—and then the grim reaper came calling.

There’s another new title by the same publisher in the wings, this one in the “Social History” series: Britain’s Railway Disasters, Fatal Accidents From the 1830s to the Present Day by Michael Foley (ISBN: 9781781593790).