Cunningham: The Passion, The Cars, The Legacy 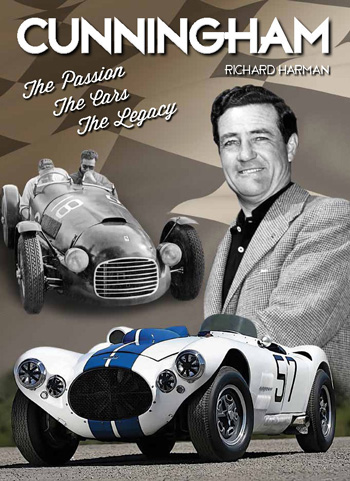 Its 15-pound weight grabs your attention from the outset. Then you open the heavy-board printed carrying case only to discover another printed board box, the custom slip
case. You slide each dust-jacketed book from the case, then carefully set the dust jackets aside and see that each hardbound volume is foil-embossed.

You pick up the first volume and begin looking and reading what author Richard Harman and publisher Dalton Watson Fine Books have created to tell of American sportsman Briggs Swift Cunningham. 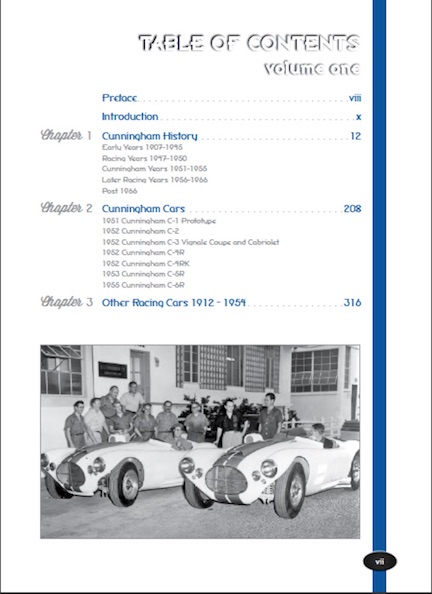 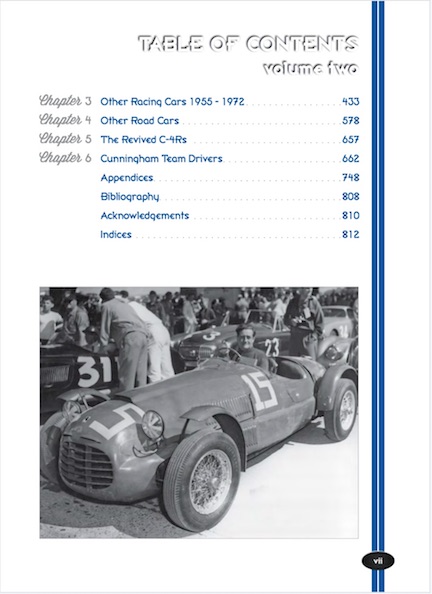 As you will discover, the table of contents goes a long way toward indicating Harman’s approach. The opening chapter describes Cunningham’s life 1907–2003, under year-by-year subheads. The second chapter describes car by car by serial number subheads, the approximately 50 produced bearing his name, followed by three chapters enumerating vehicles owned by Cunningham, both racing and road cars.

A brief four-page chapter deals with the modern-day Larry Black recreation of a Cunningham-inspired car, and the final chapter profiles just shy of 70 of those who drove regularly for Team Cunningham over the years. Volume two concludes with appendices containing race histories as well as reproductions of Cunningham car registers, correspondence, and shipping documents.

Those early documents enabled Harman to begin each individual car’s provenance, but then he obviously expended much additional effort to follow the trail and research each car, owner by owner, in order to arrive at its most recent whereabouts and ownership. In his introduction he explains how his interest had been spawned by the gift in his youth of a Dinky Toys CR-5, how he’d then followed Cunningham’s Le Mans attempts and then how, decades later, a visit to the Collier Collection in Florida inspired him to write this book.

Yet, even with its comprehensiveness, number of words and images—and despite Harman writing that “All the people who remember Briggs Cunningham that I have met, talked to and corresponded with, do not have one bad word to relate about the man.”—your reviewer senses a missing element.

Perhaps it is because Harman never personally knew his subject or perhaps it’s simply because of what’s often referred to as “British reserve.” Whatever the cause, personal anecdotes conveying the nature, humanity and graciousness of Briggs Cunningham, the director of his Costa Mesa museum John Burgess, and others are “in absentia.” 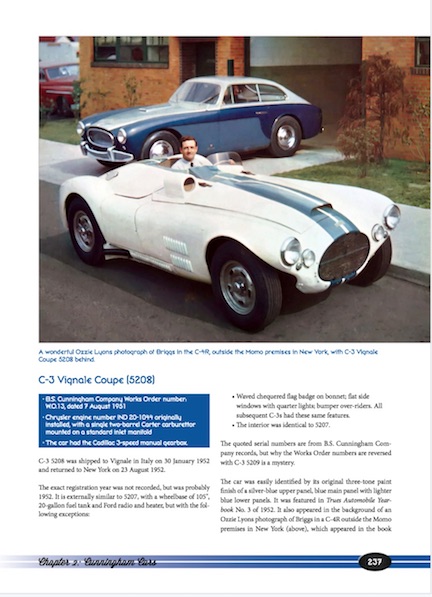 To gain more understanding and perspective, there is a 1993-published book by the late Dean Batchelor and Al Bochroch titled Cunningham: The Life and Cars of Briggs Swift Cunningham. Although out of print, it is worth the effort to seek it out from book dealers (and SAH members) such as Logan Gray, Frank Barrett, Tom Warth, and others. As brief example, the authors recounted Cunningham’s first wife, Lucie Cunningham Warren, telling them that, “Briggs was a guy with complete concentration. It didn’t matter what it was. When he took up golf, he practiced morning, noon, and night until he got down to a four-handicap and won the club championship. It was the same with tennis, and he wound up playing a beautiful game. . . . He was able to shut absolutely everything out of his mind except for what he wanted to concentrate on. It didn’t matter if it was cars or tennis or sailing.” That sailing dedication and concentration led to Briggs competing in and winning the renowned America’s Cup in 1958.

In his commentary regarding Cunningham’s America’s Cup activities, Harmon does include—from his interview with Denise McCluggage who in 1958 was a journalist assigned to cover the Cup—this insight into Cunningham’s sportsmanship: After defeating the competition by significant margins in the first two of four races, “Briggs told her that he had asked the organizers of the [America’s Cup] contest if it was possible for the two crews to swap boats for the remaining two races.” 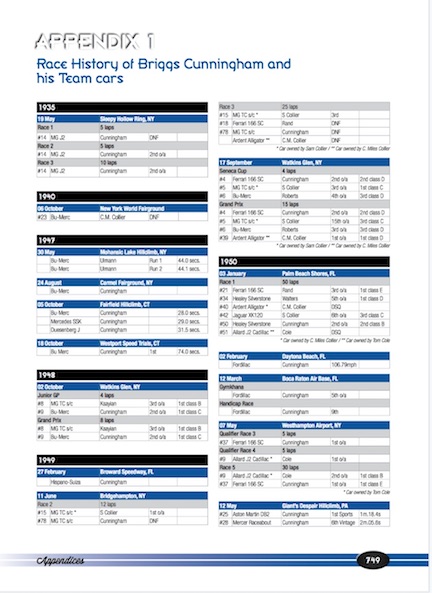 The reality is, the major contribution of this new book to the body of knowledge is the recorded provenance, resulting from the author’s research of each individual vehicle. So, while your reviewer has mentioned a prior (now out of print) book—the key words here are contribute to and expand the body of knowledge. 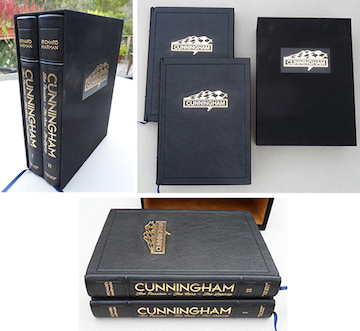 Also available as a leather-bound edition of 60 copies ($1200, right) as well as a special signed and numbered version of the Regular Edition that includes a Tribute Edition scale model (limited to 154 units, with a hand-numbered certificate of authenticity signed by the Cunningham family) by Automodello of the one-off Vignale-bodied 1954 Cunningham C-3 Cabriolet ($399).

Copyright 2016, Helen V. Hutchings (speedreaders.info).
This review appears courtesy of the SAH in whose Journal 271 it was first printed in substantially similar form.

Watching the Wheels, My Autobiography »
« The Dylanologists, Adventures in the Land of Bob