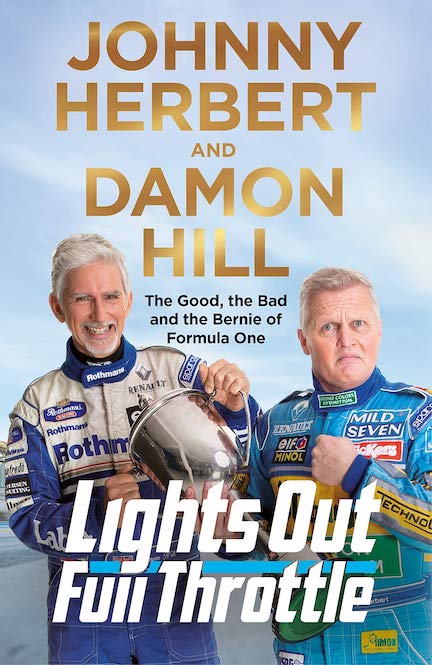 by Johnny Herbert and Damon Hill

Proof that you can take the man out of Formula One but . . . you know the rest, right?

Johnny Herbert and Damon Hill first encountered each other in the battlefields of UK Formula Ford 1600 in the mid- Eighties, and have been friends and rivals ever since. Long since retired from driving, Hill and Herbert are now a popular double act on Sky Sports F1 TV, creating a new fan base in the process, including some too young to recall their 25 Grand Prix wins (Hill 22, Herbert 3), World Drivers’ Championship (Hill, 1996) and Le Mans victory (Herbert, 1991).

I was intrigued to find out how this book would read, as the only thing Hill and Herbert’s recent autobiographies had in common was their authors’ choice of career. Hill’s book (Watching the Wheels, 2017) was outstanding—it was cerebral and intense, beautifully written and almost unrivaled in its insights into the sport. In contrast, Herbert’s ghost-written book (What Doesn’t Kill You, also 2017) was superficially entertaining but I felt it did not do full justice to Herbert’s extraordinary story. It was also a book that needed the services of a good editor, as the number of errors in the text did it no favors. 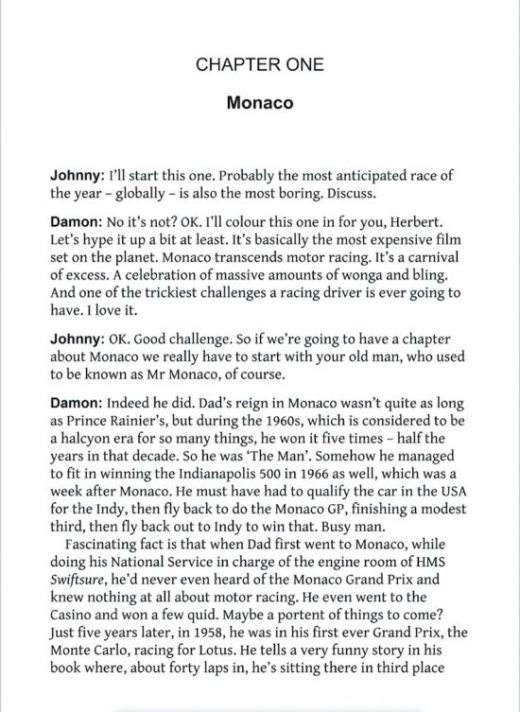 The full title of Herbert and Hill’s  jointly authored  book—Lights Out Full Throttle, the Good, the Bad and the Bernie of Formula One—sets its tone, as this book is, in the words of the blurb on the dustjacket, “…the oily rag for the petrolhead fan to inhale while waiting for the racers to line up on the grid.” The person responsible for this breathless guff is, I assume, James Hogg, who is credited as co-author, and he is also the man who ghost-wrote Herbert’s book. As you will read later, Lights Out (etc.) also falls prey to  numerous errors which might not seriously detract from the reader’s enjoyment but which should have no place in a work written by two experts in its subject matter.

That’s the caveat. But is it a good read? A qualified “yes” is the answer as, although the contents generally show a useful insight into many aspects of the sport, the format resembles a transcript of a series of podcasts. Maybe that just reflects the market. Perhaps the publisher felt that people who watch F1 on TV might simply not be interested in reading a “real” book?  Each of the 23 chapters is devoted to a separate facet of the sport, ranging from individual circuits such as Monaco and Silverstone to chapters with titles such as “Getting the yips and knowing when to quit” and “Can F1 be green, and should it even aspire to be?” For many readers, if not necessarily this one, the banter and labored jokes that pepper the book will make it an easier and more accessible read compared to recent weightier, and more academic books such as The Perfect Car (about designer John Barnard) or, indeed, Hill’s own Watching the Wheels. Other readers (including this reviewer) will find that the style employed in Lights Out can grate, but there is no doubt that the text does bear testament to the genuine friendship between the two drivers. As Damon Hill brilliantly puts it, “watching Johnny Herbert win a Grand Prix is like seeing Lassie come home.”

I don’t know how much of the book is a record of actual conversations but the length and detail of some expositions suggest that, even if this had been the case, the relevant Wikipedia page was also conveniently in view. That said, there are some fascinating and original observations in this book, especially from Hill. This is his take on the role of the driver: “Generally, there is such a divide between the drivers and the team ….They say you’re part of the team, but you’re not … It’s a temporary residency, a political relationship, and some people are very good at it, very adept, and some aren’t.” The two very different personae of Hill and Herbert help make this an entertaining read, with Hill’s mature, insightful analysis leavened by Herbert’s cheeky chappy schtick. But it’s a mistake to underestimate Herbert—his toughness was annealed in the aftermath of his dreadful accident at Brands Hatch in 1988 and you sense his inner steel from some of his comments, especially those relating to F1 drivers who complain about minor ailments. (Remember journalist Nigel Roebuck’s observation? No F1 driver can admit to suffering from a common cold, like the rest of us do, as for them only a “fever” will suffice).

As TV pundits, it is doubtless prudent for Herbert and Hill not to bite the hand that feeds them too hard, but there is still some mature discussion of the sport’s place in a fast changing world. There’s a yin and yang approach, with Hill taking the more nuanced view, while Herbert often takes a more simplistic one. Hill reflects on climate change and the need for social responsibility in F1, while Herbert’s view on the UK government environment policy is that “it is simply playing to the crowd” and that (yes, really) F1 engineers should have been consulted before the decision was taken to phase out hybrid road cars. Is it not a truth universally acknowledged that people in this most self-interested of sports struggle even to agree upon the time of day, and thus might not be ideally placed to help formulate policy?

Now that Bernie Ecclestone’s iron grip of the sport is history, it is gratifying to read that both Hill and Herbert have removed their gloves when it comes to reflecting on his legacy. Hill: “Bernie’s tactic was that if you take things away from people, they’ll give you a lot of money to get them back. As long as they’ve been improved slightly … generally they’ll cough up.” And Herbert: “If I had one big criticism of his ([Ecclestone’s] stewardship, [he] was partly responsible for taking away the soul of F1.”

So what about the mistakes? The author of any book about Grand Prix racing should know how to spell the names of drivers and teams correctly. It surely isn’t too much to ask? But the very team for which Herbert drove, Benetton, is frequently spelled “Benneton.” Tyrrell is referred to throughout as “Tyrell,” (Ronnie) Peterson inexcusably becomes “Petersen” and, hilariously, the surname of a former Ferrari team principal is apparently “Puccini.” No, Johnny, that was the opera guy . . . the car guy is Marco Piccinni. I can also assure Johnny that the notoriously reclusive and then 89-year-old Enzo was not actually present in person to watch the Monaco Formula 3 race in 1987. And what made Damon Hill think that Bernie Ecclestone bought the Brabham F1 team from Rob Walker (the man who famously gave his occupation in his passport as “gentleman”) and not Aussie Ron Tauranac (the “T” in the “BT” model designation)? Poor memory is forgivable, but there’s no excuse to mitigate the sloppy, or simply non-existent, sub editing of this book.

The frustration I felt about Lights Out, Full Throttle is that, putting aside the silly banter and the lazy mistakes, there is still a great deal to enjoy. The book includes some informed and grown-up discussion about Formula One, and the personal recollections of the two drivers about their careers always interests and sometimes enthrals. The book’s appearance and dustjacket notes appear targeted at younger readers and/or those fans with a relatively casual interest in the sport. Ironically, that approach may also serve to alienate the older, more informed enthusiasts, as it is they who are more likely to enjoy this book.

by Johnny Herbert and Damon Hill