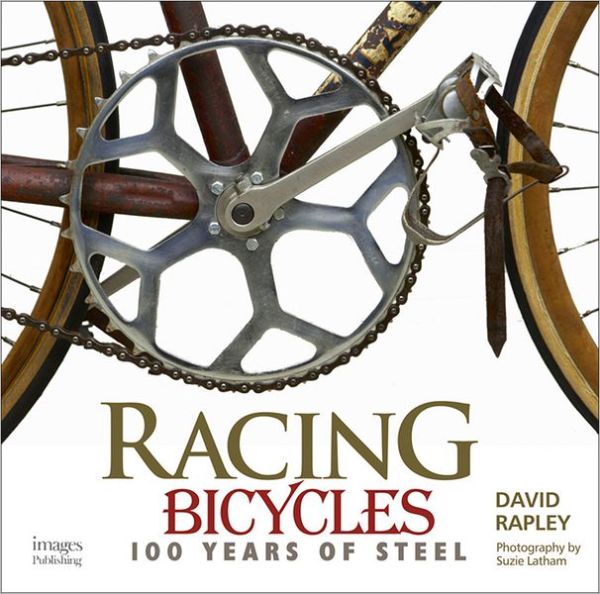 “The survival of the racing bicycle, particularly models from the 1950s onwards, is in desperate need of direction. The current fad of the ‘Fixie’ bicycle has taken a terrible toll on the remaining population of track frames, and coupled to this, there is a lot of misguided restoration due to ignorance or lack of reference material. It is safe to say the historic racing bicycle is in a perilous state.”

When you see new books every day it is not often that a book impresses immediately and, even more important, lastingly; this is one of those! A quick thumb-through right away shows skillful book design, appealing original illustrative choices, and very, very nice photos in terms of technique and composition. And how could a book about bicycle history that opens with the header “The Cycles of Cycling” not be clever? That first positive impression does not disappoint and by the time you have savored every word of Rapley’s intelligent commentary—and not found a single comma out of place or an unsightly line break—you know the people who put this book together care about what they do.

While the opening quote is by an Australian and applied to an Australian context, Rapley is correct in pointing out that other countries fare better only by degrees. This fundamental concern is really the reason behind the book: it is a call to arms to do right by the bicycle, and the means by which Rapley stokes the fire is by showcasing what eight Australian collectors have done with and to the 103 bikes featured here.

Due to the great emphasis on Australian racing bikes even the well-read enthusiast will surely discover marques here they don’t yet know about. Over half of the bikes are Australian, another 40-odd from Western Europe, and three from North America. They range from a 1902 Rambler (US) to current-production Baums (Australia). Several makers are represented with more than one bike. They are presented chronologically, mostly on two pages each, sometimes four. The year 1956 is preceded by a mini bio of Australian Russell Mockridge (b. 1928), presumably because he ran the Tour de France the previous year. He could just as well have been listed in 1950 when he won gold at the British Empire Games or 1952 for gold at the Summer Olympics. (Incidentally, he is one of the few whose autobiography was published posthumously, My World on Wheels, 1960.) 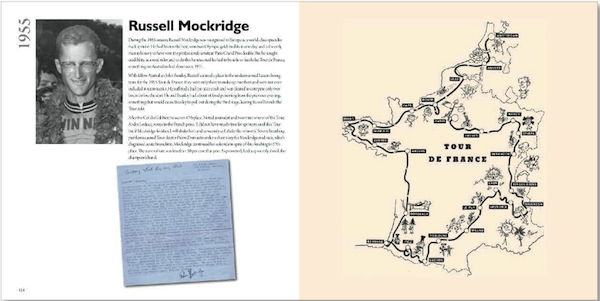 All entries begin with a uniform data panel listing year, model, type and then frame and component details/specs. It is also stated whether the bike is in original condition or restored since that is the overarching point of the book. In each case the accompanying narrative is at most half a page and is specific to the bike shown and in most cases addresses how the bike came to be in its respective collection. 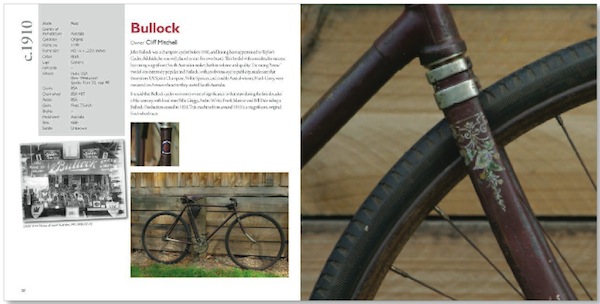 It’s difficult to sum up the photos other than saying they are really, really nice. They’re more about a mood or aura than being a visual encyclopedia of technical features. There are close-ups, to be sure, but they’re more often of the ornate maker’s logos on stems or tubes than derailleurs or brake lines. Each bike is shown at least once in full, from the right side. A handful of period photos, cycling ephemera, and several color drawings round out the picture. 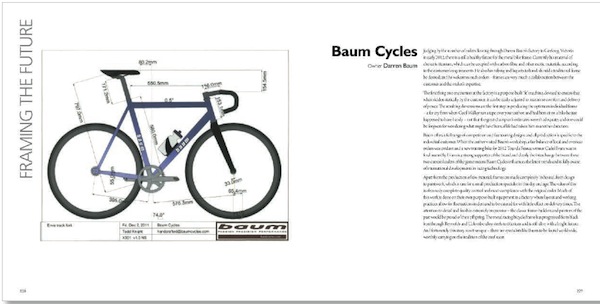 In the Preface Rapley refers to “contributors” but it is not clear if that means the text came from more than one source. This could account for the fact that the frame maker of UK marque Hetchins is listed as Jack Derry and Jack Davey when he really is Jack Denny. (And current Hetchins employees will probably wonder if they’ve been clocking in at the wrong shop all this time—one of the entries here says the firm is now in the US. Not.)

Everything about this book is inspired and inspiring—if it leaves you cold it is not Rapley’s fault! It is worth pointing out that he was/is a professional restorer, a trained mechanical engineer, and a moving force in Australia behind so many things that move (Austin Healeys, vintage racing) or have mechanical bits (cf. rifles). And he writes really well!

Posted Under: Bicycles | Author: Charly Baumann | No comments yet