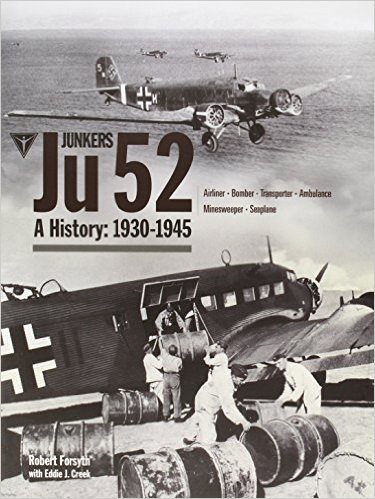 “Eventually, after persevering with sheet metal for some time, it was recognized that corrugated Duralumin was a very suitable material, although parasitic drag was more of a problem than with smooth skins—but not too much of an issue when bearing in mind the relatively low aircraft speeds of the time.”

By the time the first prototype took wing in 1930, Junkers already had 15 years of experience with all-metal aircraft, having produced the world’s first in 1915 (the J1) and the first corrugated one in 1919, the F13 that was so good that over 30 operators worldwide adopted it. Meaning, the Ju52 was a mature idea that could hardly fail; in fact, it was such a reliable workhorse that it remained in service into the 1980s.

You could go broke buying all the books these two authors have written (many jointly), especially the ones in this excellent “Classic” series, but they are so worth it. You could also go broke buying every book on the venerable “Aunty Ju” or you bite the bullet and part with the $100 for this one, skip piles of the lesser books, and come out ahead.

What distinguishes this book is the wealth of relevant detail it offers. Not every single thing about every single aircraft ever built is in here but what is, matters. Photographically the book is exceptionally strong, also in regards to facsimiles of official paperwork, and very likely will offer new bits to even those who actually do already own the piles of aforementioned Ju 52 books.

Both authors have decades of aviation research under their belts, not only as authors but publishers. On that score it is incomprehensible that there should be mistakes, few as they are, in the renderings of German words.

The book is presented in two basic parts: a chronological history (ch 1–4) of Junkers the man beginning with his family background and education, and the company and its place in the economic and political landscape of a country that on the hand was hailed as the most airminded of all but shackled first by post-WW I penalties and then by the spread of the Nazi apparatus that saw both Junkers Sr. and Jr. sidelined. This is a context- and nuance-rich account of a complicated era that should interest anyone with historic leanings, not least in regards to the Treaty of Rapallo that sought to provide a workaround for the restrictions imposed on German aviation activities. This part also focuses on the Ju 52’s civilian use.

The second part, the bulk of the book (ch. 5–13 of 14), which presents itself as an “illustrated history,” discusses the Ju 52 by (mainly military) variant or role and the authors explain the reasons for this approach in their Introduction. This arrangement allows related photos to build a thorough picture of the aircraft’s various taskings. Lots of images from the assembly stage, interiors, and close-ups of specific components will give modelers something to think about (also versions on floats, skis, wheeled skis) as will the color profiles by Tim Brown.

Appended are specs by variant, an official camo pattern paint scheme, and chapter notes. A Sources/Bibliography section casts a very wide net, including unpublished material, and the index is rather thorough.

This is not a book that will become superfluous as soon as the next one comes out. While not cheap, it is worth the money. The authors point out that “a detailed civil and military history of the Ju52/3m covering the years after 1945 is awaited and needed.” Make it so, Messrs Forsyth & Creek!