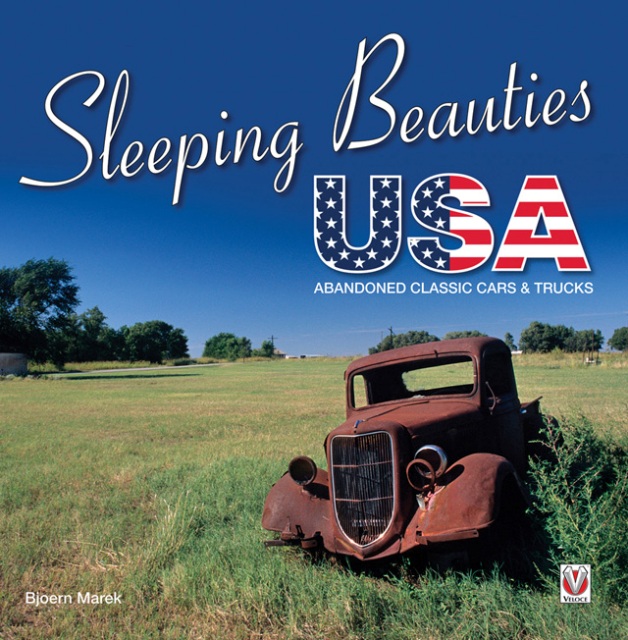 Adding to the growing literature of photo documentaries about junked cars is this look at American (except for two) cars on—if not sometimes in—American soil. Written and partially photographed by a German journalist its perspective, figuratively and literally, is that of a foreigner beholding the vastness of the American landscape.

Native eyes may, understandably, have become blind to the distinctly American vistas they see every day but for someone from densely populated Western Europe, the concept of “space” really is something out of the ordinary—especially the American West.

Landscape, then, is an inseparable aspect of these photos. The cars in them are almost irrelevant. They have no historic or esthetic meaningfulness in and of themselves; their virtue lies not in being photogenic or “important” but in being there and being past their prime. Even their organization in the book is as random as their appearance by the roadside. A ‘46 Caddy is followed by a ‘62 T-Bird, an American LaFrance fire truck follows a ‘73 Mercury Comet. No matter the subtitle, not all the cars in this book are abandoned: a gleaming, and very likely restored, ’64 Chrysler Newport clearly has a modern-day For Sale sign in the window even if the text insists it is “resting in peace.”

Speaking of text, there’s not much. Each car (one to a spread) has about a quarter page of narrative about the location, the specific car, and the model in general. Many of the cars appear to have been photographed near the Old Route 66, another piece of Americana with irresistible appeal to foreigners. Only about seven of the 60+ photos show what look to be scrap yards; most of the cars are simply parked—on the prairie, by the road, on a farm—all by their lonesome.

The text is also brief in one other regard: the “other” photographer. He is mentioned in the Introduction which ascribes “some” of the photos to him; none of them are individually credited. According to him he took more than half, including the cover. Be that as it may, “he” is Heribert Niehues—certainly a name known in German photography circles—and has been wielding the camera probably since before Marek was born (1976). US travel photography, with a particular emphasis on automobiles, and vintage car meets are his thing. He, incidentally, is active in a German Corvette club while Marek runs a German (unaffiliated) chapter of the Studebaker club. American cars and frequent travel to the US thus are their normal fare. Marek has also been running the German magazine Chrom und Flammen (Chrome and Flames, no mystery what that’s about) for a decade and has several general-interest and model-specific car books to his name.

Regardless of who took them, there’s really not one weak photo in this book. Framing, composition, angles, a sense for scale, and working with the light are all worth examining. A very few of the backgrounds are obviously problematic—unavoidable when you can neither move it nor the car. Photo reproduction is also free of flaws and the matte paper is totally fingerprint proof!

For the publisher to describe this book as a “companion piece” to their The Fate of the Sleeping Beauties title doesn’t seem to do either one a favor. Except for the title and that they deal with” old cars” they have nothing in common in terms of core focus, concept, and execution.

The Table of Contents is descriptive but not very precise and the Index brief, listing only marques but no models. If this book were the only one of its genre it would clearly have its place. As it isn’t, one is hard-pressed to state objective parameters that should tip the scales in its favor. An attractive price is certainly one but we would be remiss if we did not also point the reader towards Will Shier’s Roadside Relics.