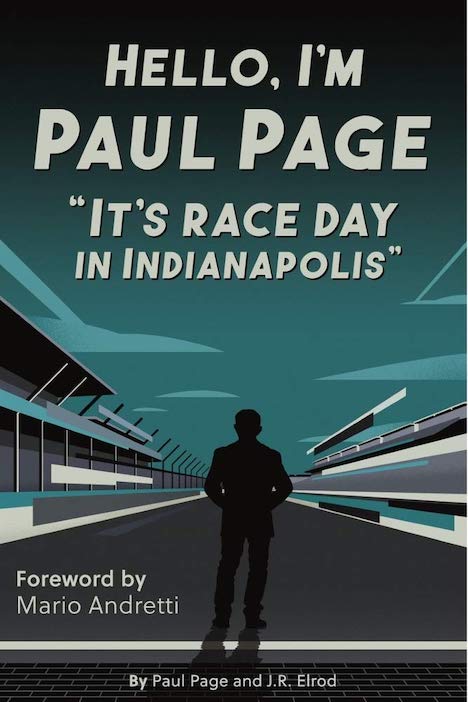 Titling his book with his signature opening words of each and every radio or television broadcast, now so familiar to race fans, Paul Page shares his life’s story with readers. As he phrases it “now semi-retired . . . having removed my headphones” after 60 years, Page decided it was time to put some of his memories on paper.

He calls his book a memoir but it feels and reads more like an autobiography for he writes of every aspect of his life including his upbringing, his parents and other relatives, his youth including when and how he first became fascinated with racing. He relates experiences as a National Guardsman that included graduating with honors from the Department of Defense’s Defense Information School (Dinfos) at Fort Benjamin Harrison and where he would instruct and then guest lecture for years afterward. (This base was closed in 1991 and the property has now been redeveloped as a multi-use community now known as The Fort.)

Page also writes of training and working as a licensed paramedic, and of his marriage to fellow broadcaster Sally Larvick, his son Brian and daughter Marlo (who, he writes revealingly, they named after Danny Thomas’ daughter in honor of her being a “feminist icon”). And he describes surviving the helicopter he was riding in falling out of the sky. Lady Luck had indeed been with him for one of his legs had been so badly broken in the crash that it was feared he might never walk again until one of the doctors called in Indianapolis’ top orthopedics Drs. Bob Brueckman and Terry Trammel.

Page didn’t just announce races for he’d been to driving school to “find out,” as he writes, “if I really had the chops” for racing. He did as he subsequently earned his SCCA racing, as well as his FIA B and USAC stock car, licenses and campaigned his own Lotus 51 throughout the Midwest.

There is an abundance of racing history and stories featuring many  racing luminaries. However, here a word of warning is in order. While there is a two-page bibliography, no one insisted on the book being indexed so if there are events you’ll want to revisit or stories of specific people you’ll want to find again, best make notes as you read of the page numbers.

There is one interesting appendix. It’s a list (in mouse type) of the just shy of the 50 series or events which Page broadcast over the decades and includes the location of each. Some of them are decidedly quirky such as Nathan’s Hot Dog Eating Contest in Coney Island or a Rubics [sic] Cube Championship in Budapest.

The manner in which the book and Page’s story is presented he credits to his co-author J.R. Elrod, who is not in any way a part of the racing community but rather an attorney. In his preface Page writes that Elrod “brought a vision for this book that pushed beyond a collection of anecdotes and toward an earnest first-hand account . . . across the decades.” He goes on to say, “So there are really two voices here, history and a view inside the sport over 60 years.”

The writing is conversational in style rendering the book a fast-paced attention-holding read. Hello, I’m Paul Page is a book whose pages you’ll return to for the pleasure of the read as well as for the information and history it contains.

bibliography and appendix but no index