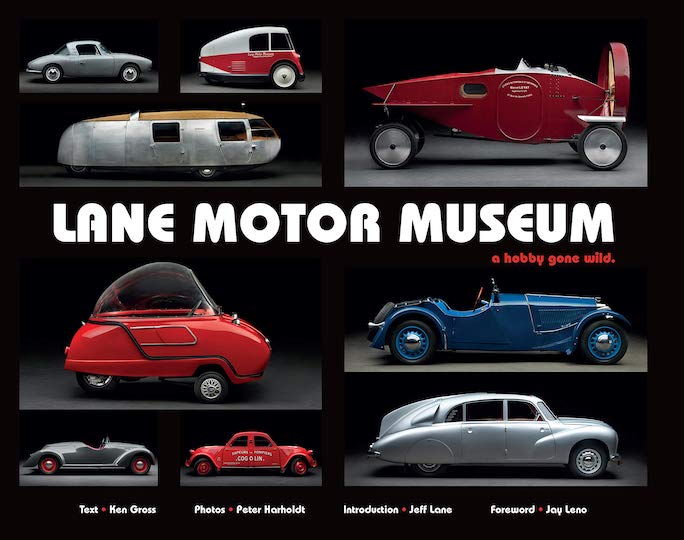 It would be too easy to start by throwing around some exotic names, just to trip readers up. You’d have to be an ubergeek to know all or even many of the cars in this book! Seriously, can you name more than three of the cover cars?? One of the chapters here is entitled “Unusual Solutions” and that pretty much applies to everything in this book and in the Lane Motor Museum’s garages and workshops in Nashville, Tennessee.

Did you know that the uncle of famous race driver Sam Posey once (late 1920s) built a propeller-driven three-wheeler? The Helicron on the right is French and dates to 1932 but its ruins were lost in the ruins of a French barn until 2000.

It’d take you a few years of frequent visits to the LMM to see everything the museum owns because the floor display, due to space constraints, changes often. It usually showcases some 150 of the over 550 vehicles (including bikes, boats, planes) museum owner Jeff Lane just couldn’t be without. And he isn’t done collecting either . . .

As to the book, or rather planned series of books, you may not live long enough to see the whole collection that way because a new installment is planned only every five years, each covering about 50 cars. The first book, reviewed here, is sort of a Highlight Reel and introduction to, as the subtitle says, A Hobby Gone Wild.

It all started with MGs for Lane Sr. and Jr.

Speaking of Introduction, it is written by the man himself, Jeff Lane. It follows a Foreword by Jay Leno, which is neither here nor there, except that Leno too has a soft spot for the quirky. Over several pages Lane gives a good account of what drew him to this genre, cutting his teeth by helping his (accountant) dad restore an old clunker and ultimately becoming a Mechanical Engineer. The Tatra car whose decidedly unorthodox design and engineering first spoke to him is, by comparison to the alphabet soup of curios in his collection, practically a mainstream machine. He has 22 of them by now. But more importantly, Lane explains the museum’s purpose as well as his buying, collecting, restoration philosophy and you cannot help but think that he is as unique as the cars he is intrigued by. Consider, for instance, that some 450 of the over 550 collection cars are in running order, that he thinks nothing of driving one of his cars to a concours (if their often anemic speeds allow it . . .) and, better yet, he lets museum patrons rent a car (of their choice, if it can be arranged) for a 150-mile outing once a year as a fundraising incentive!

The 50 cars are divided into various categories/topics. There is no developmental or chronological or really any sort of discernible arc, nor does there have to be one; just peruse the Table of Contents. Whether its the Flipper or the Grataloup or the Corphibian that catches your eye, you can jump in on any page and expect to be amazed. The text is by veteran historian Ken Gross, and even he with his years of museum and car expertise probably had to dig deep, not least because quite a few of the cars presented here are one-offs and some even all-out scratch-built replicas from ancient blueprints. Each car/project is described in sufficient detail to gauge its place in the larger scheme of things, and each is accompanied by a data panel (that sometimes includes original price, which will either make you laugh or wince when thinking of today’s asking prices). A few of them will have a Driving Impressions sidebar.

Hang on to your hat—28 mph, for the Hoffmann on the right. On a good day. With tail wind. Says the caption: “Simply stated, this car is extremely unstable.”

Principal studio photography is by Peter Harholdt who set up shop at the museum, in an area with asphalt floors so the cars pretty much look as if they’re on real roads. Other images are by Bruce Sweetman and there is a fine sampling of illustrative and technical drawings, so on that score too the book is a delight.