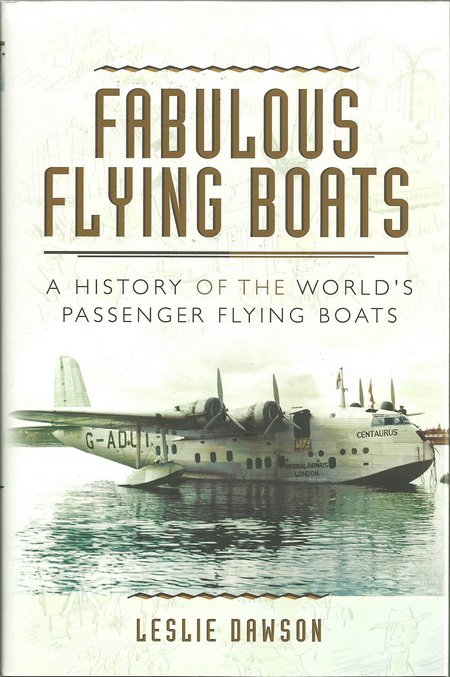 A History of the World’s Passenger Flying Boats

Add the word “Western” before “World” and you’ll have a better idea of what to expect. This is not a technical history bristling with specs and data but a lively narrative of the origins and operational use of flying boats in airline service. World history is not a sharply delineated affair so civilian craft in military service or purpose-built military boats spill into the story.

It’s been thirty years since Dawson wrote his last aviation book, the well-received Wings over Dorset: Aviation’s story in the South [of England] but he’s never far away from aviation matters, as a pilot/instructor, commentator or, especially relevant to this story, advisor and historian to the Poole Flying Boats Celebration, a UK charity that aims to advance awareness of the era of flying boats (civil and military) and seaplanes associated with the Poole area during and after the Second World War.

That Dawson is fascinated by this subject is evident throughout the book. Reading the unusually long Acknowledgments shows just how many people offered input and source material, and how good a time Dawson had researching the subject. He even got to fly a seaplane!

Many strands come together in a book like this and there is no point in quibbling about how the tapestry is woven. In other words, how this book advances is not always straightforward so this is a book best read from cover to cover, at least on the first go.

The first chapter, “First to Fly,” introduces all the usual suspects—with one notable addition: one Richard William Pearse of Cornwall and New Zealand who may have beaten the Wright Brothers by several months but toiled in obscurity and was only recognized posthumously decades after his death in 1953. If the early history of aviation is all news to you, this chapter offers a good introduction to the various developments in the [western] world. That British endeavors are discussed in particular detail is surely not bias but simply a device for building up the story a certain way.

After addressing the pros and cons of water-based flight operations the focus shifts to minutia such as how a flying boat behaves on the water and in the air. This is told in great detail, both from the crew’s and the passengers’ perspective. From getting your ticket punched to running up the engines, from the chill in the cabin to settling down for a smoke, from radio transmissions to ports of call—it’s like being there! Even the seasoned reader will find snippets of detail here that have not been strung together in this way before. The remainder of the book returns to the macro view and follows the use of seaplanes through the decades up into the modern era where some of the old birds are still in use as firefighters.

There is an abundance of illustrations. Not many of the photos are dated and captions are usually so brief that you have to search the nearby text for enlightenment. Aircraft are usually identified by name or type. The Appendix contains a lot of data but takes some effort to figure out. There is, for instance, a liberal use of abbreviations (TEAL, QUE etc.) that are nowhere spelled out, or shorthand (“sold Qantas” [by? to? and is that different from other entries that say “to Qantas”?]) The 300-odd aircraft listed here are described by tail number in chronological order, and by country (UK, France, Germany, Norway, Italy, Uruguay, Argentina, Brazil, Australia, New Zealand, USA, Canada, Virgin Islands). The Index lists pilots, planes, personalities. Some entries are bold [why?], some have only one or several letters in bold [??], and the level of detail is totally uneven. Why, for instance, does Israeli violinist Yehudi Menuhin need to be included when so many other useful entries are missing?

No matter, this is a very nicely written book, fun to read, and offering many useful details.

A History of the World’s Passenger Flying Boats Hardcover