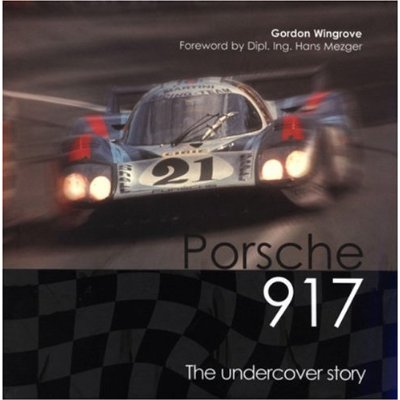 “A madman is on the loose with a car company, and he intends to use it.” This is but one (Car & Driver Nov. 2009) of the many quotes one reads nowadays about Ferdinand Piëch’s ambitions, one of Ferdinand Porsche’s grandsons, who, having retired as Chairman and CEO of Volkswagen Group, still sits on its and also Porsche’s Supervisory Board and wields enormous influence. Why do we care? In the context of 917 history it is worth remembering that it was largely that man’s drive forty years ago that fast-tracked the Porsche 917—one of the most iconic racecars ever—from sketch to prototype in an unheard of short seven months (or ten, depending on how you count).

There is no shortage of interesting books about this car. What makes this one stand out is that it is written by a former race mechanic who knows every nut and bolt on the car.

Connect the dots: The “PMM” on the Impressum page stands for Peter Morgan Media. As an author Morgan has himself made significant contributions to the Porsche literature (for the 917 see especially his The Winning Formula, 1999). His newest book is an autobiography of Porsche’s excellent engineer Hans Mezger (Porsche Story: Hans Mezger, May 2010) who wrote the foreword to Wingrove’s book.

Gordon Wingrove worked as a race engineer for Porsche’s de facto works team and official development partner, John Wyer’s JWA Gulf Team, during the 917’s glory years. (There were two other “official” teams: Porsche Salzburg, under the control of members of the Porsche family and Martini Racing.) JWA engineer John Horsmann was instrumental in turning the 917’s disappointing 1969 inaugural season around by figuring out the right compromise between downforce and drag.

Wingrove’s hands-on experience and technical background give unique depth to this book. He covers the whole design and development process, dialing the clock back to 1963 to put the genesis of the 917 into proper context. Considering how much has already been published about the 917 it is remarkable that this book, thanks to support by the Porsche Historical Archive, contains quite a few never before seen engineering documents and photos. The Porsche Museum even made its 917L available for in-depth study. The book reproduces a number of memos and letters, several translated in full, and also many quotes and anecdotes that could only have been gathered by someone who was in the trenches. It does not include the Can-Am cars, i.e. the 1972/73 seasons.

In terms of the 917’s inner workings the book tells a fully comprehensive story, leaving no loose ends and adding layers of important detail. The many photos are augmented by specially drawn technical illustrations. On some topics the author goes into quite a bit of technical minutia. A prior understanding of racecar dynamics will make a reader fully recognize Porsche’s accomplishments with the 917. Racers and engineers will appreciate the insights given into things such as the routing of oilways, metallurgical considerations, wind tunnel work, or spoiler settings. There are only three topics where actual math is involved: drag coefficients, gear ratios, and kinetic energy in the context of braking. The general-interest reader may roll his eyes at these things but the narrative remains fluid throughout and for those who must, it’s easy enough to skip ahead a few sentences every now and then. (Another type of reader who will savor especially the chassis and construction details is the model builder whose only source of reference—short of an actual car—are books like this. There are many close-ups of suspension and drivetrain assemblies, and the dead-on side and top views of frame and chassis provide undistorted references for dimensioning. German-language readers will find even more detail in the actual construction drawings that can only be found in a German book by the publisher Delius Klasing: Porsche 917: Archiv 1968–1974 by Walter Näher, 2009. ISBN-13: 978-3768826518.)

The person who has never sat in a racecar will get a kick out of the “Cockpit” chapter. It details the location of every switch and gauge, how to get in and out of the car, how the seat and trim would feel to the driver, how he would thread his feet into the bulkhead to reach the pedals, what the angles of view are, etc.—if this book had “scratch and sniff” tabs it’d be like being there! A final chapter, “917 in Competition,” explains how data acquisition was done and how race set-ups were arrived at. Appended are the 1969–71 ICM results and very detailed specs for the 1969 and the 1970/71 cars. The index is sufficient but riddled with typos and typesetting glitches. Throughout the book, most of the German Umlauts are missing and the spellings are such that you shouldn’t want to place any bets on them.

Among the illustrations from the time of the development phase is of course the “money shot”—the 25 cars lined up for the FIA inspection but there is not a lot of detail as to how these 25 were cobbled together by anyone in the office who could hold a screwdriver just to meet the FIA inspection date, only to be torn apart afterwards and rebuilt by “proper” mechanics. (Who will tell us that story?!)

The last sentence in the book—“Today is raceday and the real battle will be fought . . .” is where most other 917 books begin.