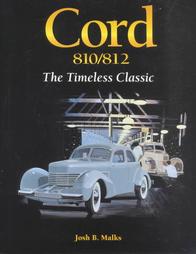 I have lived with a Cord for over 70 years, and have driven my own Cord for over 60. During that time I have met, or roomed with, or escorted, or attended parties with, etc. most of the people associated with Auburn, Cord, and Duesenberg. I would even dare to refer to many of the principals as friends. Thus when I was asked to review this book about the Cord by Josh Malks, I gladly accepted the task. I have known Josh for over 50 years, and his attention to detail and style of writing certainly makes it easy to sing the praises of his book. He is a former president of the A-C-D club and the tech editor of their magazine. And all the right people in the A-C-D world have had their eye on the book and contributed to it or supported it in various ways. It has been several decades since the last in-depth piece of original research on the marque was published (by Griffith Borgeson) and longer still since Dan Post wrote the first-ever history of the Cord in 1951. More information has come to light since then and Malks makes every effort to list his sources to back up his comments and, in situations where there is no documentation but only conjecture, freely says so.

I am amazed at the thoroughness and accuracy of the detail of the history of the car, and the events surrounding its great success. The narration is so well written and interesting, I found it difficult to put down in order to sleep. From the early days of E L Cord, the man, to the final days of Cord, the automobile, the story is exciting.

The truth about many of the “urban myths” that have surrounded the cars is well told. While the Cord had some minor problems, most were a result of customer negligence. This is correctly spelled out. The players in the development of the “Baby Duesenberg” were important persons of history in their own right: Fred and Augie Duesenberg, Gordon Buehrig, Alex Tremulis, Sir William Stephenson, (“a Man called Intrepid”, who with Cord, created an airplane factory that poured out thousands of Spitfires), Tom Mix, Herb Newport, etc. who helped develop, produce, and publicize a modern car with a successful front wheel drive, that became the basis for almost all the FWD cars on the road today. It also details the many speed records set by Cord cars in their day, along with many rare and almost unheard of “special” (coachbuilt?) Cords produced by the factory.

The book has plenty of excellent pictures, mostly in black and white but some in color. Also shown are a number of old ads, price lists, road tests, magazine clippings, and technical drawings. Six appendices contain all sorts of data, including a full set of chassis listings. There also is a bibliography and an index. I believe this to be the best reference book on the Cord published so far.

Adapted from a review first written  for the January/February 2000 issue of The Flying Lady, the periodical of the Rolls-Royce Owners’ Club (RROC/USA). Reviewer Simpson is the owner/driver of a 1936 S/C Cord Phaeton and a retired math teacher.

Posted Under: Automobiles, Award Winner, Biography/ Autobiography, History, Out of Print, US | Author: Other | No comments yet