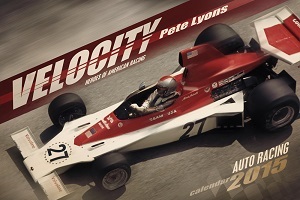 Well, it’s that time of year to start thinking about the next one. So get thee a calendar.

Award-winning photographer/author Pete Lyons is a safe bet for getting something up on the wall that isn’t just fluff. He has spent decades covering races all over the world and amassed an extensive archive of racing photography by himself and his late father, Ozzie.

As his earlier Can-Am Calendar series for the same publisher, this American Auto Racing one is not just a random dip into the archive, find 12 snazzy images—hey presto, done. That’ll be $29.99, come back next year. 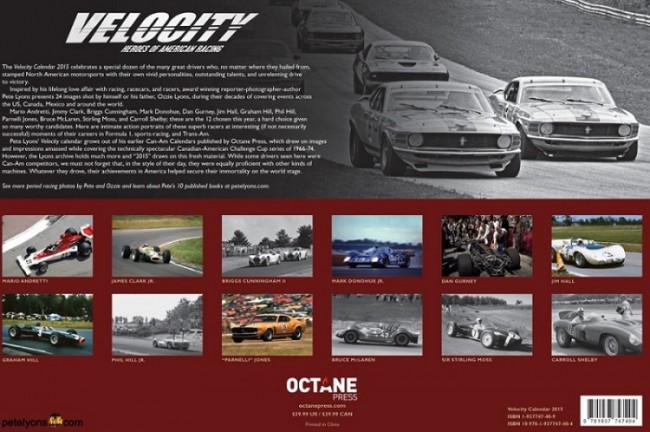 Lyons being a writer and racing historian also means he wants to show a photo and write a caption that is on some level emblematic of the sport, the car, the maker, the driver. And even with thousands of images in his archive, Lyons doesn’t necessarily have a good photo (or one he took himself) of everything that might matter in any one year. And, just to make things difficult, he wants to pair a full-page 17 x 11.5″ action shot of the driver in the car with a small close-up of the man of the month. Bruce McLaren (in the 1964 Cooper-Olds winning at Mosport), for instance, made the cut because of the company’s 50th anniversary. The cover photo of Andretti, well, that’s just too good a shot not to use but if you show him you’d better throw the Phil Hill crowd a bone (but not in the de rigeur F1 Ferrari but a Can-Am car). And so it goes—there’s a reason for everything: Jim Clark, Briggs Cunningham, Mark Donohue, Dan Gurney, Jim Hall, Graham Hill, Parnelli Jones, Stirling Moss, and Carroll Shelby. 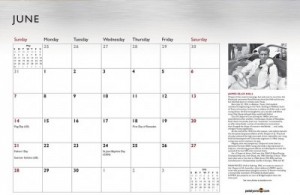 Only about 1000 copies are printed; when they’re gone they’re gone. Premium paper, large format, even the individual day fields are big enough to actually write in. What’s not to like?