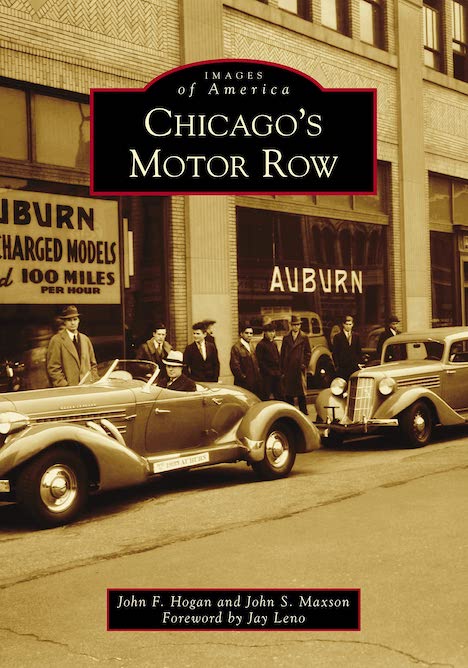 As the 1900s dawned so too did the automobile and Chicagoans responded in a big way as is documented in the 150 images of Chicago’s Motor Row. The authors note, “Other cities developed automobile rows, but Chicago’s was almost universally regarded as the most imposing. Car shoppers from across the Midwest descended on this automotive smorgasbord,” adding that “sales topped $30 million annually by the end of the first decade.” Think of it; thirty million in annual sales by 1910 and realize that’s roughly equivalent to six hundred million in today’s dollars.

The district offered consumers choices from as many as 116 different makes sold out of one or another of the approximately 60 buildings that comprise—then and now—Chicago’s motor row district in the city’s South Loop community.

That the majority of those buildings are extant today is a story unto itself. It began with a group of concerned citizens. Three of them who also shared in common membership in the Society of Automotive Historians (two still are members) made a persuasive presentation to the city council. The council acted and the time gained gave the group time to attain the bigger, stronger umbrella of protection with recognition of the multi-block area being placed on the National Register of Historic Places.

Complementing the book’s list of “landmarked structures” by address there is an accompanying street map showing their proximity to one another.

As with others in Arcadia Publishings’ Images of America series, this book is text light and image strong. To the authors’ credit they stuff a lot of information into the photo captions. 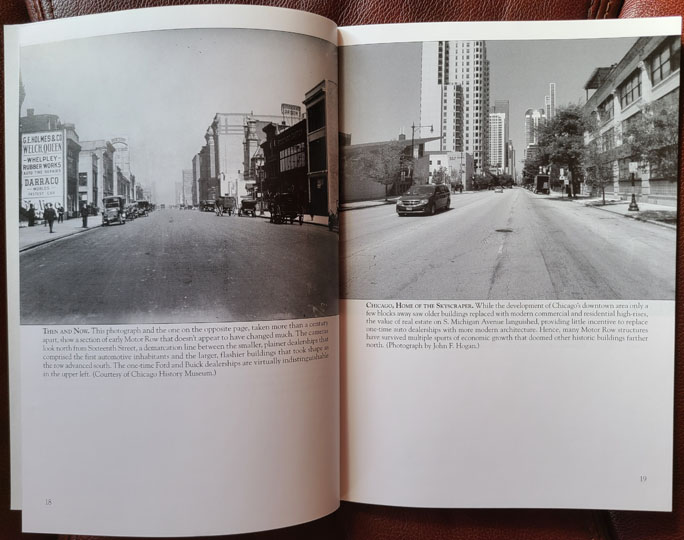 Shown here are one of the “then and now” pairing views taken just about a century apart. You are standing at the intersection of Sixteenth Street and Michigan Avenue looking north up Michigan. As the now clearly shows, the further north you go, i.e. toward downtown, skyscrapers have replaced some of the original buildings. But here near the intersection several of the original buildings are preserved.

Photos are presented in three loosely themed chapters. The first is called “Street of Dreams” followed by “The Journey begins Here” because, as most know Chicago is at the most northern and eastward end of Route 66. The third chapter is “Open Road Ahead”. The latter two contain numerous contemporary photos of extant buildings and the architectural details on many of them. 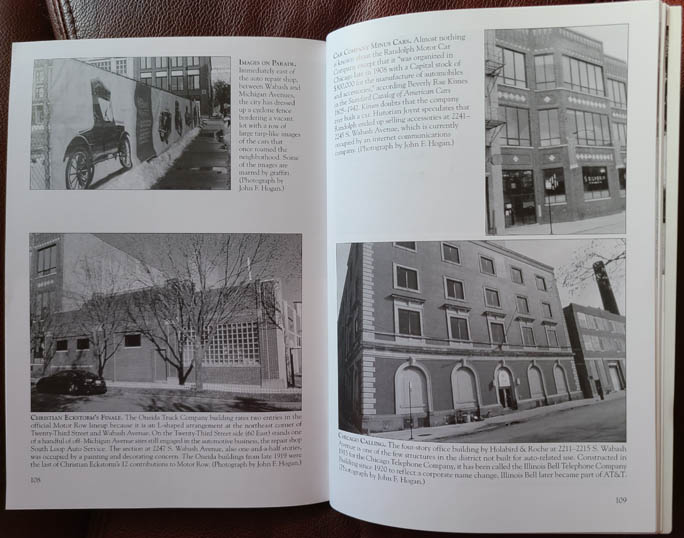 This page pair shows, top left, how the city made a vacant lot surrounded by chain link more attractive. Below it is the structure that housed Oneida Truck Company, designed for that company by Christian Eckstrom. The building at the top right is that of Randolph Motor Car Company about which virtually nothing is known and its entry in Standard Catalog of American Cars 1805–1942 speculates it never actually built a car. The bottom building wasn’t auto-oriented. It had been constructed in 1915 by the Chicago Telephone Company which later became part of AT&T.

Residents of the greater Chicago area and visitors can take walking tours to enjoy examining these historic buildings of Chicago’s auto row up close and personal. But anyone can see them anytime from anywhere, in the comfort of a favorite chair, on the pages of this book.