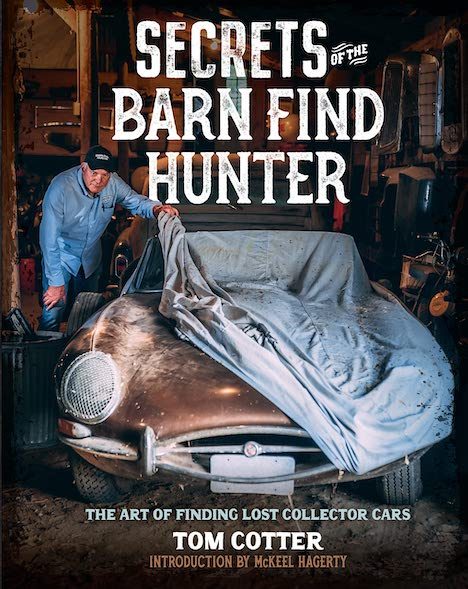 Tom Cotter has an ever-growing cadre who follow his various adventures and discoveries on the Hagerty-filmed, -sponsored, and
-produced Barn Find Hunter video series broadcast twice a month on YouTube and who enjoy reading his books, now approaching some twenty titles in all.

Several of those titles have been reviewed on this site, this one making the sixth. No surprise too, that his publisher, Motorbooks, is happy to produce yet another Cotter-written book for all sell well as each is written in a casual, conversational style displaying the same easy-going way that viewers of his Barn Find Hunter shows have come to know.

In his introduction to one of Tom Cotter’s earliest books, the 2005-published The Cobra in the Barn; Great Stories of Automotive Archaeology, Peter Egan wrote of Cotter, “Tom lives, thinks, reads, and breathes old cars more deeply than anyone I know. He collects, searches, restores, judges at concours events, and goes far out of his way to help friends (such as yours truly) find the old cars they’re looking for. He loves the hunt, and he’s also a fast and dedicated racer of vintage sports cars.”

What Egan doesn’t mention is that Tom and wife Pat have been wed for just shy of 50 years. Early in the 1980s they relocated from their native Long Island, New York to North Carolina as Tom embarked on a career in motorsports public relations and marketing. He “done good” as they say. His Cotter Group eventually served clients with impressive names like NASCAR, Speed TV, Lowe’s, McDonalds, and others before embarking on writing. But it’s surely the barn find titles that have earned him his sizeable and loyal following augmented by the 2016 launch on YouTube of his “Barn Find Hunter.”

Essentially this book is autobiographical in nature while more-or-less focused around Cotter’s philosophies regarding dealing with people and life in general as exemplified by his searching—ever searching—for old cars. Of himself Cotter writes, “After many years of writing about old cars, I realize that I am a story teller. The car is only a catalyst in delivering a human-interest story. Those are the stories I love to unearth and share with my viewers when I can draw them from an owner.”

It’s a fine bit of irony that as your commentator opened the covers of this newest Cotter-written book telling the Secrets of the Barn Find Hunter the old car world is a-buzz with a 3,000 car lifetime collection now being sold from out-of-the-woods in a relatively unpopulated, more-or-less remote area described by Peter Gariepy, AACA’s website moderator, as being “600 miles from Seattle, 400 miles from Portland, 300 miles from Reno, 400 miles from San Francisco.” Eventually the hobby will learn more about this now-deceased accumulator/collector but mention here is just another affirmation of what Cotter enjoys seeking out and telling about.

One of, if not the most touching story shared on the pages are of a similar lifetime and large collection. Located in St. George, Utah, it covered 44 acres all contained and surrounded by a six-foot tall concrete wall. Locals had always known of it for its proprietor had had a successful body shop business, towing service, and ultimately a junkyard. After retiring he simply closed the gate and permitted no visitors until a polite message on his phone from Tom Cotter persuaded him to open the gates and let Tom and the filming crew wander the acres, filming the cars and recording his comments. His one caveat, no photos of himself. 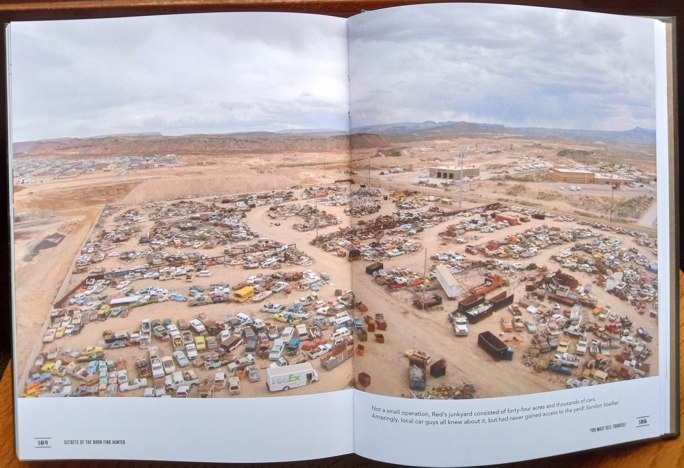 Happily one on the crew did manage a lovely still snapshot of their host. Happily because a scant two weeks later Tom received a call that “Red” had passed in the night and his daughter had lamented they had no recent photo of her dad but that he had talked continuously about what a special day the visit from Tom and his film crew had been for him. So with that, since the entire collection has since been dispersed and the land cleared, shared above and below this paragraph are two views of that St. George gathering of old cars. Oh, and that surreptitiously captured still image was used by the family on his funeral cards. 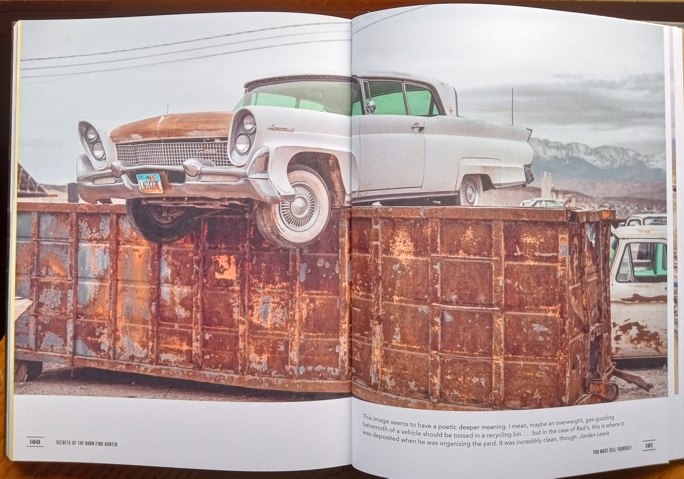 Several chapters have “View from the Passenger’s Seat” sidebars written by some of the different photographers whose credits appear with images in the book. One is Jordan Lewis who is the Hagerty videographer of Cotter’s “Barn Find Hunter.” Another is Michael Alan Ross who travels with Cotter and was along on the trip that became the 2018 book titled Ford Model T Coast to Coast; A Slow Drive Across a Fast Country. Then there are two other one scribed by one who has been along for the ride his entire life. That is Tom and Pat’s son Brian who today is, like his dad, part of the auto world just as his job title indicates for he is Mercedes-Benz USA’s AMG Product Manager.

As with his “Barn Find Hunter” program, Cotter contrives to be interesting, entertaining, and informative without talking down to his listener or reader. To this reader/commentator, he’s been successful one more time. One of his admirers dubbed it “the Tom effect” describing it as his ability to almost instantaneously engage people and obtain their trust. So with this book Cotter has been able to share tales and experiences from north to south, Alaska to Cuba, and ocean to ocean—even across the ocean to the UK—with those who buy and read this, his newest book.

Secrets of the Barn Find Hunter