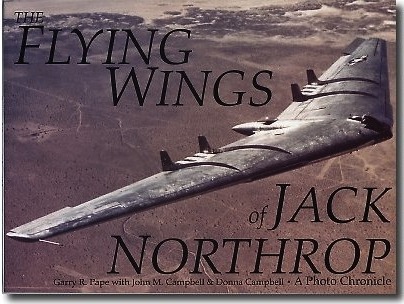 This excellent photo book details the 10 different flying wings built by Northrop Aircraft between 1941 and 1953. The book starts with the N-1M, a small twin-engine pusher-prop flying wing with 300 square feet of wing area. Later on we see details of the 1947 YRB-49A heavy bomber with a wing area of 4,000 square feet. The book ends with the Mach 0.9 N-69 cruise missile with a wing area of 326 square feet. From small to large and back again—and they all flew, some better than others.

What makes this book excellent is the crisp clarity of the Northrop company photos. Professionally shot, mostly by Roy Wolford during the time the planes were being tested, they were meant to be a visual record of how each flying wing worked, detailing the control surfaces, not just the shape of the plane. The only text is a short introductory paragraph at the beginning of each chapter summarizing why each of the 10 planes was built, a thumbnail sketch of size and performance data for each, and picture captions that tell the reader what to look for, as well as a quick few words about the strong and weak points of each design.

Flying wings have always had control problems. Eschewing the traditional stabilizing influence of a vertical tail and rudder for the sake of aerodynamic efficiency, a flying wing tends to “hunt” constantly, the nose of the aircraft inscribing an endless shallow figure-eight pattern as it flies. This constant movement makes aiming a bombsight or machine gun difficult. How Northrop tackled this problem is interesting to see. No definitive answers are offered in the limited space devoted to picture captions, but the control surfaces designed to dampen this movement are clearly shown, as are the big counter-rotating eight-bladed pusher-propellers on the XB-35 bomber designed to dampen out airframe oscillations in flight. Switching to jet power made the oscillations worse, requiring the addition of four vertical tail fins across the back of the wing. For many reasons, the flying wing development program was cancelled, hastening Jack Northrop’s resignation from his own company. He did live long enough, however, to see the current Stealth B-2 flying wing bomber come to life.

The Northrop factory drawings that accompany the photos will allow modelers to accurately reproduce any of the 10 flying wings in detail. The same can be said for the pictures of the cockpit interiors for both the N-9MB twin-prop pusher and the XB-35 bomber. The photos show in tremendous visual clarity all the gauges and control levers, switches, throttle controls, foot pedals and everything else the pilot, bombardier and flight engineer needed to fly the plane. Here and there interesting bits of information appear in the picture captions. One that surprised me was that during World War Two magnesium was not considered a critical material for the war effort, so the entire XP-56 pursuit plane, including wings, airframe etc. was welded and flush-riveted together out of that material instead of aluminum. The resulting magnesium flying wing XP-56 now resides in the Smithsonian’s National Air and Space Museum.

The book opens with Acknowledgements thanking Northrop Corporation and others for the photos and technical information about the flying wings. After that, a very short Introduction on who John K. “Jack” Northrop was, followed by Contents, then directly into the 10 Chapters, each covering one of Northrop’s flying wing designs. The book ends abruptly without an Index which, given that this is basically a picture book with captions, is not absolutely necessary, but still missed.

If you want to cast your eye even further back check out this publisher’s The Horten Brothers.

Spanish Republican Aces »
« The Roycean: From Manchester to Crewe, via Derby – Vol. 3