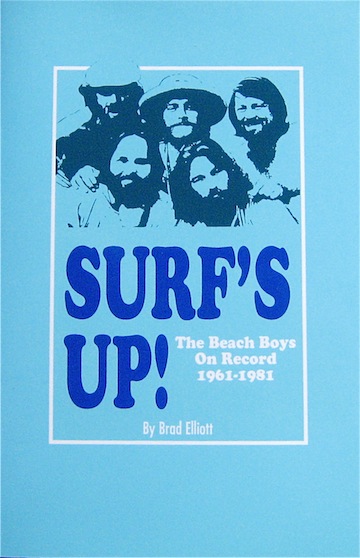 What the Bach-Werke-Verzeichnis is to J.S. Bach, Surf’s Up is to Brian Wilson. Well, not quite, but close enough. Although Wilson is and has always been the prominent Beach Boy, the heart and the soul of the group according to many, and although the history of the group is writ too large to be about just one man, Elliot’s book unfolds as a heartfelt tribute to Brian Wilson. It is an exhausting labor of dedication and love. The first line of the introduction stakes out the enormity of Elliot’s turf: Surf’s Up . . . “is an attempt, hopefully successful, to compile a complete guide to the recorded works of the Beach Boys.”

To the casual listener or fan, to the casual buyer of recorded music, referring to the enormity of the endeavor may seem an exaggeration. How hard can it be? Track down discographies from a handful of record companies, do some quick research concerning band members’ solo work, unearth the well-circulated bootlegs, do the lists, double-check the numerical catalog listings for each recording, triple-check release dates, and publish the material. Like most things in life, however, it just is not that simple. Consider that through the decades the various songs were, after the initial release, re-released several times and in varying combinations, at times on varying labels, and that many Beach Boys material is found on numerous anthologies and compilations. Elliot wants to note every release and re-release in detail. Also consider that his goal is not to merely list the Beach Boys’ output; he also wants to list every recording in any way related to the group. Did Brian write songs for Jan and Dean or for an Annette Funicello beach movie? Did Carl Wilson sing back-up for a David Cassidy number? Was that Dennis Wilson playing drums backing Ricci Martin? What were Bruce and Terry up to? Were you aware that Glen Campbell was briefly a Beach Boy stand-in and that Brian produced one of his singles? The answers to these and to many, many more like them can be found in Surf’s Up. Also, b/w illustrations of record covers and labels, many of them rarities, are found throughout the book, and these are appreciated. 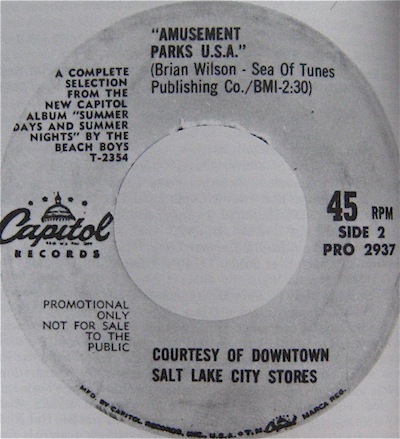 Elliot covers it all. There is a section delineating the lead singer on any given track, another covering unreleased material, yet another describing the various label graphics used by the record companies; information is given about the Billboard chart listings throughout the years, and the more important Beach Boys releases from across the world. And more. Such minutia may seem trivial to many, but somehow it all becomes riveting; I find myself wiling away an hour or so lost in a kaleidoscope of titles, catalog numbers, and recording artists from an era important and beloved, but, like the Big Band era of my parents’ generation, slowly and inevitably fading from general popularity and notice. And this thought brings me to the downside of Elliot’s compendium. This book is an anachronism. Although here and there one reads that vinyl, especially among true audiophiles, real music lovers, is making a strong comeback, the reality is quite different. As technology advances at a pace unimaginable even a decade ago, even CDs are losing ground; to today’s middle-school set, CDs are quaint, something one’s older sister still uses on occasion. Downloading is king.

My sympathies lie with collectors. If given a chance to visit a really fine vinyl collection, holding in my very hand, say, a genuine copy of What Is a Young Girl Made Of/Barbie by Kenny and The Cadets, on the Randy label, catalog number 422, 1962 (Kenny and The Cadets being Brian Wilson, with mother Audree, brother Carl and Al Jardine as backup, singing two songs over some prerecorded instrumentals: What Is a Young Girl Made Of/Barbie), an appreciable tingle will run through me. These two songs are of course now available as downloads, on YouTube, and, yes, CD, and this brings up another problem with Surf’s Up: The true believer will be impatient with Elliot’s listing; it needs an update—Beach Boys material has been on CD since 1985, going on thirty years now, and there must be hundreds of CDs available, both officially released and bootlegged. A comprehensive list of these would be welcome.

Surf’s Up, in the sphere of pop music, is a must for collectors, a delicacy for all Beach Boy fans and a reference nonpareil.