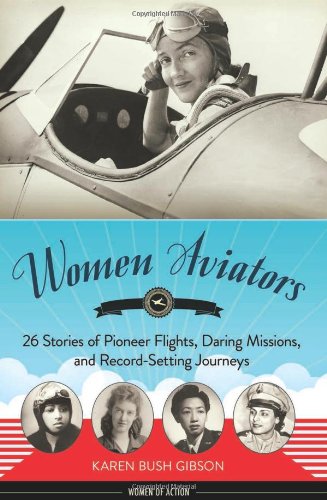 “Women had to prove themselves, again and again by earning pilots licenses, setting records, demonstrating aerial moves, and winning races. They had to keep proving themselves because as Ambassador Clare Boothe Luce once wrote, ‘Because I am a woman, I must make unusual efforts to succeed. If I fail, no one will say, ‘She doesn’t have what it takes.’ They will say, ‘Women don’t have what it takes.’”

If you stumbled across this book simply by virtue of its title you probably wouldn’t realize that this is a book aimed at young readers, age 12 (grade 7 in the US) and up, in the “History/Young Adult Nonfiction” category. Not knowing this could cause disappointment to readers already familiar with the subject because [a] there’s not much new here and [b] the selection criteria for the “26 remarkable female pilots who sought out and met challenges both in the sky and on the ground” are not stated.

Books that don’t explain their methodology, no matter who the intended audience is, don’t do themselves any favors. This book does have an Introduction, by the author, but it not only launches right into the subject, it zooms to the very fringes, singling out a person the French like to refer to as “the third Wright Brother,” Katherine Wright (Haskell). While her relative obscurity today (she had been an international celebrity when she accompanied her younger brothers, aviation pioneers Wilbur and Orville, to France in 1909) does drive home the point that, generally, the roles of women and men are recorded with different degrees of magnification, Katherine’s direct contribution to the cause of women in flight is marginal at best. Yes, she (b. 1874) did keep the Wright household together after their mother died in 1889, she did nurse Orville after his crash, she did run the home office, and her brothers’ shyness was rendered far less self-limiting by her vastly greater social skills. Gibson justifies her choice by saying “its questionable whether [the brothers] would have succeeded without her” but this is so fine, and so peripheral, a point that it is impossible to discuss without a much larger frame of reference than the intended young reader of this book can possibly be expected to possess. On the other hand, a certain amount of drum beating must be expected in a book that is part of a “Women of Action” series, now numbering six titles.

Gibson is the author of more than 30 juvenile nonfiction books, including Women in Space: 23 Stories of First Flights, Scientific Missions and Gravity-Breaking Adventures for the same publisher so she is on familiar ground here as far as tone and didactic approach is concerned. But the specific subject matter is surely not familiar ground—not automatically a reason to despair: sometimes the best books are written by authors who are exploring a subject anew—and one can’t help but wonder if the reason she chose her 26 aviators, many of whom not the “usual suspects” one would find in most books, were selected intentionally to draw attention to lesser-known but no less representative candidates or because she just doesn’t know any better. The latter seems unlikely because, on the one hand, the book does have a quite extensive Bibliography (divided by books for adults, for children, and newspapers/magazines) and each chapter both ends with a “Learn More” feature pointing the reader to other material and has Chapter Notes listing Gibson’s sources. On the other hand, she makes statements that demonstrate, at worst, a less than overwhelming knowledge of facts and, at best, make apples to apples comparisons impossible. An example: in a discussion of modern-day commercial pilots she writes, “In 1982, the first female jet captains in the U.S. were working for Piedmont Airlines. Two years later, Great Britain’s first all-female airline crew flew passengers from England to Holland.” If the point Gibson wants to make here is that the UK had female airline jet captains later than the US, she is wrong: Yvonne Pope was certified on Comets already in 1975. The verifiability of such pronouncements is not helped by juxtaposing “jet captains” to “airline crews,” the latter presumably including all other flight deck positions.

Long story longer: the more a writer deviates from the established canon, the more undeniable the scholarship must be. This book may have been chosen by the Smithsonian’s Air & Space magazine as one of the Best Children’s Books of 2013 and won the 2014 Notable Social Studies Trade Books for Young People, and it is a perfectly nice book in a handy format (5.5 x 8.5″), and it won’t lead anyone down a horribly wrong path, and one must always be thankful in this digital age for any printed book that gets greenlighted—but we say: there are better books.