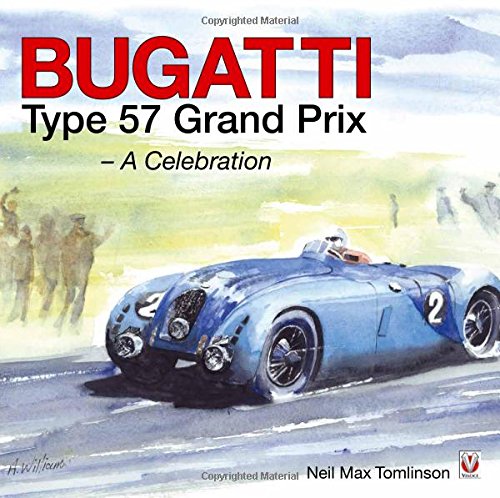 “In letters to his son, Ettore often expressed his dissonance by referring to the Type 57 as ‘. . . a Buick made in Molsheim,’ so it should have hurt Jean deeply to have his efforts put down by his father like this.”

Jean Bugatti had been groomed from childhood for a leadership role in the firm Ettore had built so “dissonance” in their relationship and over this model would have been bad enough but history also records that Jean was killed in a T57—not the car’s fault, but still ironic.

Over 700 T57 road cars were built 1934–1940, including the famous Atlantic and Atalante. Though drawing on parts and techniques from earlier models they introduced innovative technical and design solutions and were very much suited to turning the company’s fortunes around. But racing being the costly enterprise it is, it was no longer a priority for Bugatti and so only very few racing versions of the T57 were made—known as Tanks for their slab-sided bodies—and this book is their long overdue story. 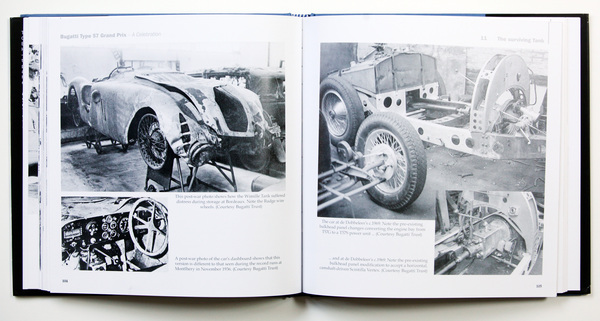 Early on the book says it “celebrates the Bugatti T57 Grand Prix racing cars: their origins, triumphs, failings, trivia, trinkets, and a little about the personalities behind them, all interwoven with the social and political influences of those times.” If the book did only that, and it does, it would have earned its place on the bookshelf. But wait, there’s more.

Anyone with an interest in racing, technology, and design in general and Bugatti history in particular will recognize that this book offers much useful detail about what Hugh Conway in his Foreword refers to as “a little-known area of activity.” While it seems pedantic to point out, there actually are people who mistake this H.R.G. Conway, the current chairman of the Bugatti Trust, with his father Hugh Graham Conway who founded the Trust and was a world-renowned expert on the marque. It is stating the obvious to say that the Conways know their Bugatti history better than most so take note of the fact that HRG [a] wrote the Foreword at all and [b] specifically singles out some of his colleague’s more radical suppositions as plausible before you attribute some parts of the book to an overactive imagination.

Tomlinson, a member of the Trust since its inception who has produced much noteworthy work, certainly needed an active imagination in order to consider new answers to old problems. For instance, over the three seasons of their racing career, only three Tanks ever appeared in one place at one time whereas company records showed four cars being built. In the past, the discrepancy has been chalked up to shoddy record keeping, certainly an explanation with precedent. Bugatti experts will want to start with Chapter 16 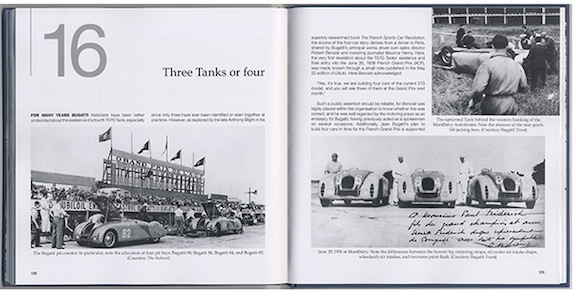 in which Tomlinson makes his case for a fourth 1936 car, based on a fresh interpretation of well-known photos and period sources. This has wide-ranging implications on the micro (cf. the 1937 Le Mans Tank must be a G-spec car) and the macro level (Jean Bugatti considered the T59 the real racing version of the T57). What makes him see things that others have not and, more importantly, what allows him to make deductions others have not, is probably his professional training as an engineer in various motoring-specific disciplines. Thinking out loud, he guides the reader through a forensic analysis connecting a wide array of disparate data points. You may not want to agree with his findings but you’ll have a hard time coming up with better arguments. Seeing such shopcraft in action is alone worth the price of the book! As thorough as the explanations are, they are also complex so pen and paper will come in handy. If there is a weakness it is that oftentimes specific photos are referenced but without giving their page number (two famous photos showing three Tanks together are, for instance, over 100 pages apart).

Tomlinson’s approach also allows him to assign specifics to the famous hushed-up Tank crash at Montlhéry, leaving only one question remaining: who was the driver? He allows that his answer (Jean B.) is “pure speculation” but, again, his ability to reshuffle known data and extrapolate a different answer is remarkable. 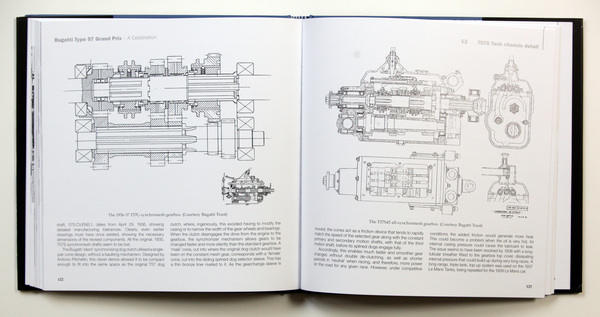 All the foregoing gives merely a hint of the qualities of this book. The first 10 chapters discuss the years 1936–39 in detail, ending with Jean’s fatal road accident. Another five chapters deal with specific components and chassis adding some previously unpublished drawings to the printed record, and a final chapter summarizes key findings and shows Tank model cars (kits, scratch, ready-made). The award-worthy Table of Contents should be adopted as a universal model; the lack of Tank-specific literature in the Bibliography leaves no doubt why the world needs this book; and, lastly, an Index helps navigation just enough.

Tomlinson spent 40 years mulling this subject over; let’s hope he had other irons in the fire so we won’t have to wait that long for the next book!