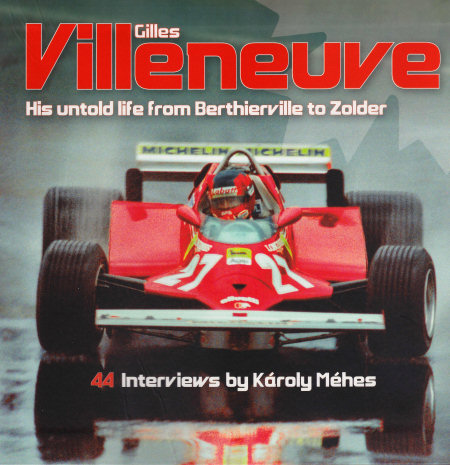 “Only in slow motion can you recognize a white something parting from the wreck and landing at the other side of the asphalt in the second row of the catch fencing.

The chicane has been redesigned and the run off areas are much larger, some trees have certainly been cut down. But I can recognize the spot without any doubt. There is awesome silence and standing on the shiny asphalt I know that something is turning in my mind.”

Berthierville, near Montreal, is actually not the place where race driver Joseph Gilles Henri Villeneuve was born in 1950 but where he grew up (and is buried), and Zolder, Belgium is of course where he so tragically died in 1982.

Hungarian F1 journalist Károly Méhes took Villeneuve into his heart as a schoolboy, in a big way, although the reasons for that are not made clear. All things considered, it couldn’t have been his driving record, or the force of his personality, notwithstanding the fact that teammate Jody Scheckter called him in his eulogy “the fastest driver in the history of motor racing . . . and the most genuine man I have ever known.” Whatever Méhes’ reasons, the book is noteworthy simply for its author’s good intentions and as an expression of his commitment to the cause. 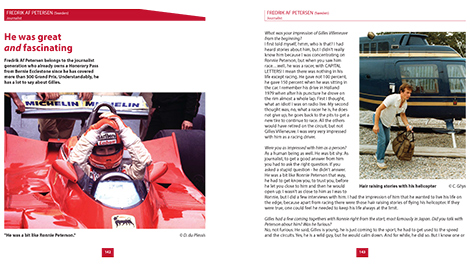 He interviewed 44 of Villeneuve’s contemporaries, and while all the facets they contribute do add up to a richly colored picture of the man, there really is not anything fundamentally heretofore “untold” as the subtitle would imply. And while the picture really is nuanced—not all the comments are unabashed praise and there is no hint of sycophancy—the novice reader who is here encountering Villeneuve the elder (he had a brother Jacques who was also a racer and a World Championship-winning son Jacques; the latter supplying the last of the interviews in this book) is given too little context to gain a well-rounded understanding. 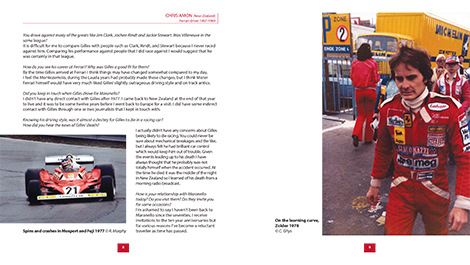 The contributions are, for instance, not presented in any discernible order (the Table of Contents is tucked away at the back of the book; there is no Index) nor is there any connective narrative. This means it requires an alert reader to puzzle out that Villeneuve who is so specifically associated with Scuderia Ferrari really counted Lotus as his first love, or was weary of remaining with Ferrari for the 1983 season if his teammate Didier Pironi (d. 1987 so obviously not interviewed for this book) was also going to be signed. The reader, then, who will be able to enjoy the book with the least encumbrances is the one who already has fairly broad race history knowledge. For a fully fleshed-out proper biography the authoritative 1989 Gilles Villeneuve – The Life of the Legendary Racing Driver by Gerald Donaldson, who is in fact interviewed here, remains the go-to book. (Incidentally, the film based on that book announced in 2005 and slated for a 2007 release has still not come to pass, this despite the Senna and Lauda/Hunt movies finding an audience.)

It is not really surprising that some of the interview questions are so much alike that they sound, to the reader, repetitive but the answers are obviously coming from different angles. What is surprising is that a professional writer like Méhes is making no attempt to call out the occasional discrepancies, let alone resolve them. (That’s what footnotes are for! Even about the fatal accident itself, questions remain.) Some of the contributors are journalists and photographers and on that count this book does add seldom-heard voices to the record even if it is only nuances. The English translation is quite choppy in regards to syntax and word choice.

So, take this book for what it is: one man’s homage to his hero, a kind and kind-hearted labor of love that adds a few bricks to the never-finished house of knowledge—but there could so easily have been more.