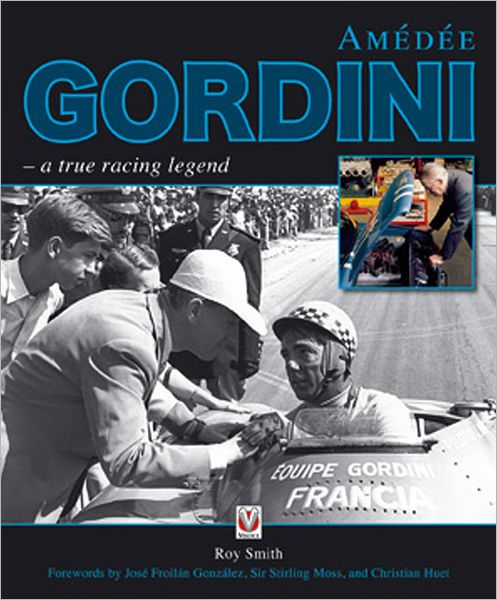 “Gordini was the ultimate ‘underdog’ who made the bigtime, mixing it with the best, participating always with hope, and never without enthusiasm, though often with frustration and failure due to the lack of financial resources that forced him to adopt a ‘make do and mend’ policy.”

Some of the greatest names in racing on and off the tarmac were associated with Amadeo Giovanni Maria Gordini but unlike his peers and contemporaries—Ferrari, Maserati, Bugatti—his name is mentioned as rarely as his few existing cars are seen today.

This, then, is a story that ought to appeal to anyone with an interest in the David and Goliath aspect so common to the human condition and not just to aficionados of GP racing or quirky French road cars. Add to that the fact that this is the first time the Gordini story has been recorded in English and the only time it has been brought up to date and you have a book you can’t very well do without. Author Smith is mindful of the burden of history and that he has to do right by his subject, lest it be buried in obscurity—again. His previous three books, all superb, on Renault cars (the first turbocharged F1 cars and the racing history of the Alpine and Renault Sports Prototypes) made plenty of reference to the self-taught Italian-born French racecar driver and sports car manufacturer who supplied engines to Alpine and was as competent on the dance floor as in the grease pit. Smith has applied himself to the Renault story since he began writing magazine articles about Alpines in 1989 and being the UK correspondent for the French magazines Rétro Passion and Mille Miles.

If you do already have an interest in Gordini you surely know the one single previous book extant, Christian Huet’s excellent French book, Gordini Un Sorcier, Une Equipe published in 1984, five years after Gordini’s death in 1979 (b. 1899). It told the story up to the folding of the original company in 1957, ending prior to the Renault involvement that would twice—separated by a 23-tear hiatus—put the Gordini name into circulation again. Reference to Huet’s book is relevant not least because he fully endorses Smith’s effort and has contributed some of the source material that he as a confidant and friend of Gordini’s after1965 is the only one to possess. (He also owns three Gordinis!) Huet also wrote a most sympathetic Foreword, as did Argentinian racecar driver Jose Froilan González (d. June 2013) who raced Gordinis and Sterling Moss who did not.

As in his previous books, Smith went to great lengths to gather first-hand interviews and primary sources to anchor his account in firm fact and address inconsistencies in the record. The writing in this newest book is supremely fluid, fleshed out, and utterly engaging. Also, and important in its own way, this book for once evidences complete command of the conventions of proper punctuation that UK writers have for years made a sport of ignoring!

Probably to emphasize the break between the pre- and the post-Renault years, Smith places much of the tabular material not at the end of the book but between Parts 2, which ends in 1957, and 3. (Gordini himself saw the involvement of mighty Renault as a two-edged sword and ultimately was disappointed by the outcome.) The serious reader will find useful data in these almost 50 pages of stats that are, oddly, not called out on the Table of Contents; they include 38 pages of detailed 1930–57 race results, and a few pages each of engine and chassis histories.

The book is full of illustrations from Gordini’s own archives and important period collections (Cahier, LAT et al) and private sources. Much of it is new to the record. The Index is rather too brief and the grey color of the photo captions not exactly reader-friendly but other than that, there’s simply nothing not to like in this book!