The Last Hero: The Gallant Story of Donald Campbell and The Land Speed Record, 1964 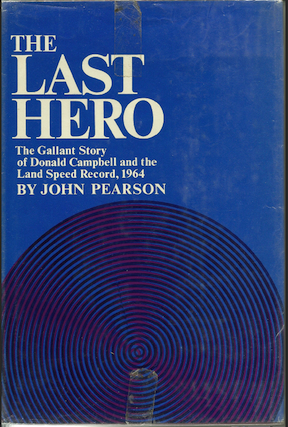 On July 17, 1964, Donald Campbell, son of Sir Malcolm Campbell, set a record of 403.10 mph for a four-wheeled vehicle—Class A. This record was set on the salt flat of Lake Eyre, Australia. John Pearson spent time with Campbell during the preparations for the assault on the land speed record—and through many of the long days and months of waiting for the salt surface to accommodate a proper run. These were months of frustration, delays, inaction, and impatience; months of bad weather, dust storms, heat and the rain that would inevitably prevent trails or speed attempts. These were months spent with a handful of people in a desolate land.

Pearson is a novelist, not an automotive journalist, and it is this that makes the book so good, such a pleasure to read. His skill in depicting the inherent loneliness of the endeavor, the wildness of this obscure corner of the globe, the often strained relationships among the cast of characters, and the various and complex personalities of these characters is the skill of seasoned writer. He has an eye for physical detail, and sympathy for the event; he writes authoritatively and lovingly on the car, Bluebird, and he is knowledgeable of the politics involved in attempting to set a speed record—the sponsors, official certifiers, government cooperation, and the financing that embraces all of these. All of this is relayed to the reader in a style both fluid and informative.

The people in the book, Campbell’s wife Tonia, his chief mechanic Leo Villa, and Eliot Price, the owner of the compound where Campbell and the crew were housed during their stay—and others—are shown as real people, people the reader gets to know intimately, their good points, their bad points, their good days, their bad days. A prime example of this is Campbell’s complicated—Freudian?—relationship with his dead father. As the book progresses, the reader begin to feel for these people and wishes them well. This again shows Pearson’s dedication and skill.

And perhaps the ultimate accolade for Pearson’s performance is the fact that although, because of the nature of the book, one knows in advance the outcome, one paradoxically loses this knowledge and becomes wrapped up in the adventure, wondering if indeed Campbell will succeed—and cheering the hero when he does.

My Life and My Cars »
« Avanti (Bonsall)