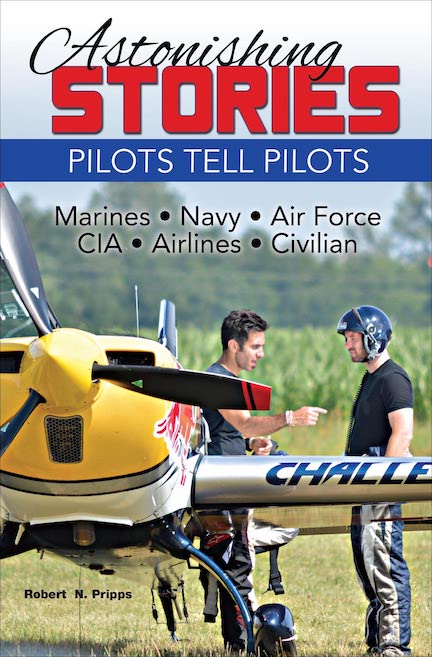 To be sure there are other books in my own library authored by Robert (Bob) N. Pripps. All of those tomes reside on the shelves devoted to agricultural-related subjects as in books about tractors, farm implements and equipment and the like. That makes this book a total departure from the 30plus published books already written by Pripps that all focused on those topics. Yet aviation has been an integral part of his life since, well, just about forever as he earned his pilot’s license prior to his high school diploma.

A work coming from one’s passion gives it, just about always, a different quality. Those not already immersed in the aviation world may not recognize it but they are also the readers who will truly find numerous of the tales Astonishing Stories. That said, every reader will absolutely be entertained by the over fifty Stories Pilots Tell Pilots.

It’s a quick read too in part because each story is fast-paced. It’s also made quick by the simple fact you don’t want to put it down until you’ve turned that very last page as each shared story is so good you can’t wait to read the next one. 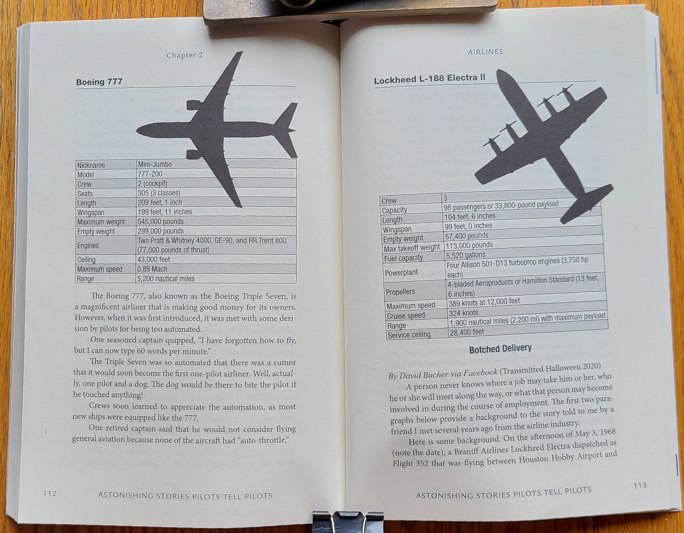 Each “chapter” begins with a silhouette of the aircraft that is part of that story. The images put me in mind of the flash cards student pilots—especially military types—use to learn to identify all types of aircraft aloft and from afar. Each image is accompanied by a “statistics” box giving some basic information about that particular airplane such as empty weight, gross weight, fuel capacity, service ceiling, wing span, engine, crew, and more.

Stories come from all parts of the aviation world; private or civilian, commercial airlines, as well as various branches of the military just as the subtitle indicates. One commercial pilot’s one-liner is a fine example of the timbre and tone of the stories. “My junior high school teacher told me no one would pay me to look out the window. . . .  Now, I’m an airline captain.” Then there’s this “flight attendant tidbit: Passenger: ‘How often do planes crash?’ Flight attendant: ‘Just once.’“

Additional samples; this from the military: Ever wondered what a gallon of milk weighs or how its weight compares to, say, a gallon of gasoline or water? Moreover, why might knowing that be important if you’re flying something like a twin-rotor helicopter?

Or: Ever wondered what it’s really like to be launched off the deck of an aircraft carrier? And even more challenging, what it might be like to try to bring an aircraft down onto the deck of one? Pripps relates the tale of a pilot of a Chance-Vought F7U trying to do just that and—a warning—it is a particularly harrowing experience.

Then there’s the immensely delightful set of radio transmissions with the LA sector and three aircraft in this order; a Cessna, a Beech, a North American-made jet fighter and topped, literally and figuratively, by an SR-71—all the while paying a huge tribute to controllers, the entire group of professionals. (And yes, a version of this can be found on YouTube.)

Should you need one last example to convince you to obtain your own copy of this book, there’s this exchange between ground control and an aircraft aloft. You are left to deduce what the airplane might be.

Acknowledgement was “Uh, Center, GF 51 is descending to flight level 650.”

no index (but none needed or appropriate)