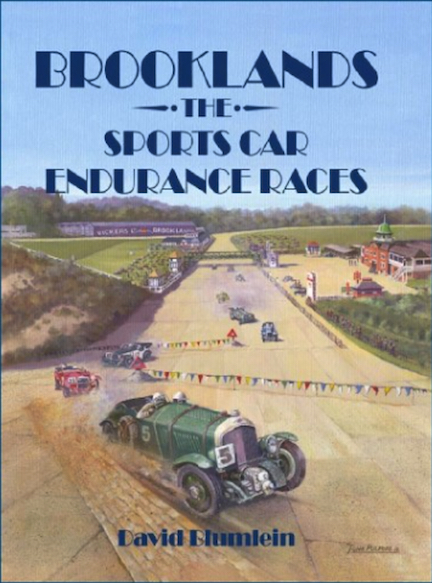 “Such was the pace that the first casualties were already appearing. W.B. Scott’s Austro-Daimler was out by 8.30 am with a blown gasket. Shortly after Howe’s Bugatti was baulked and his rear wheel smote the sandbank, which spelt future problems, and Archie Frazer-Nash was already fitting the first of several new superchargers to the Austin Seven, the first of a series of set-backs that would cost Austins the Team Prize. Cushman brought the Alvis Silver Eagle in with big end failure, denying Harvey…”

Anyone who orders this book and then complains that it’s not about what they want it to be about only has themselves to blame—it’s all in the title: sports cars, as opposed to single seaters; endurance, as opposed to, say, sprints, the race format commonly practiced at Brooklands.

And, anyone who orders this book because they recognize from the title that it means to button up a bit of a loose end will naturally be familiar with the several Bill Boddy books about Brooklands; and the person who can indeed recite chapter and verse from those books will gasp a bit to read in the Foreword that “Blumlein delivers far more detail on these races than Bill Boddy was ever able to include in his seminal History of the Brooklands Race Track*, to which this work forms a vital new adjunct.” The latter part is incontestably true but before you swoon about the first part of that quote, realize that the fellow who wrote that is pretty much the last word on all things Brooklands these days, Allan Winn. Of course, if you don’t know who he is—and Blumlein quite inexplicably doesn’t say—the impact of that statement is rather lost. (Winn became in 2003 the Director & CEO of the Brooklands Museum Trust and in 2018 the first Vice President of Brooklands Museum. If the name sounds familiar from a different context it is perhaps as Editor/Publisher of Flight International magazine for 14 years. Incidentally, he received the Royal Automobile Club’s 2019 Lifetime Achievement Award so don’t be too quick to pick an argument with him!) 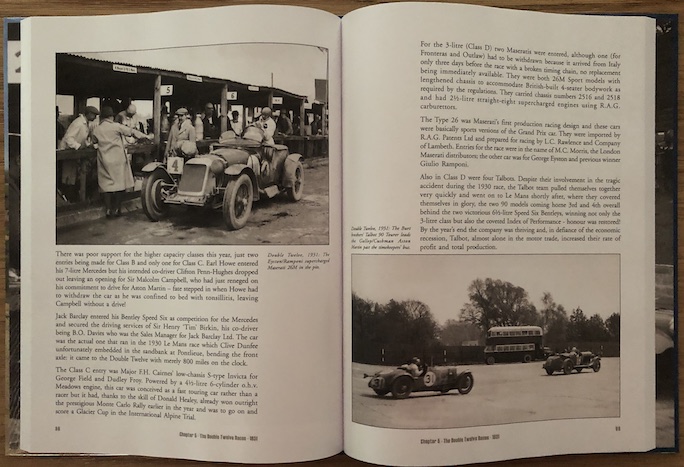 Where to keep the timekeepers? Put ‘em on a decommissioned bus.

The reason to open the review with the quote above is because it gives a good taste of the tone of the book, which is very much like print and broadcast race reports used to be in the pre-TV era. People who behold the world in more visual ways will probably struggle with that sort of granular detail being embedded into prose rather than tables or graphs, but Blumlein, in more ways than one is definitely old school. For instance, he wrote this book in longhand, and he has half a century as a British schoolmaster under his belt, more than half that time running run a private school he founded. He has been “passionate about cars from the cradle” and written plenty on the subject, not least two earlier books you may already have, Le Mans: A Pocket History (ISBN 978-0851840680) in 2003 and The Spa 24 Hours, A History (ISBN 9780851840772) in 2014.

The story isn’t just all micro detail though but is embedded into Big Picture history of the people and machinery involved in racing in general and the track in particular. It starts in 1906 when work on the track began and ends in 1939 when the Outer Circuit was pretty well worn out anyway so even if WWII hadn’t broken out at just that time, Brooklands’ future as a racing venue would have been unclear. The fact that it stayed in use at all was that manufacturing outfits had already taken up residence on the premises, and during the war the Vickers and Hawker factories bolted over 6300 aircraft together here (mainly Wellingtons and Hurricanes respectively).

Brooklands may have been the world’s first purpose-built race circuit, but nighttime running was forbidden, due to the noise. The core question, for the organizers and participants back in the day, was if a 24-hour race divided into two 12-hour daytime stints had the same relevance—or cachet—as one continuous 24-hour race. Thanks to Blumlein you’ll now have a handy reference on which to base your opinion. 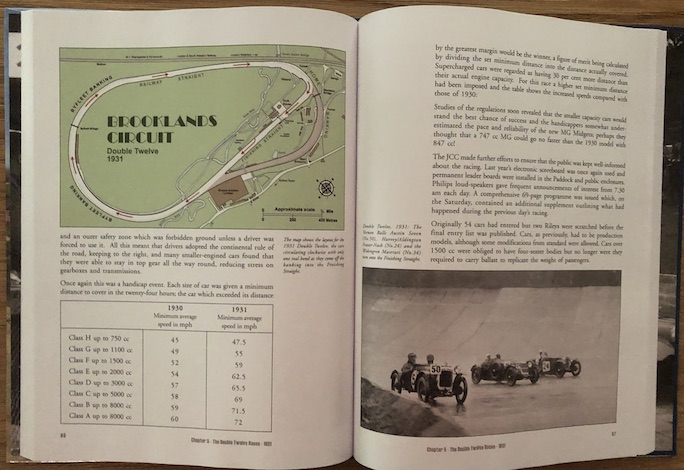 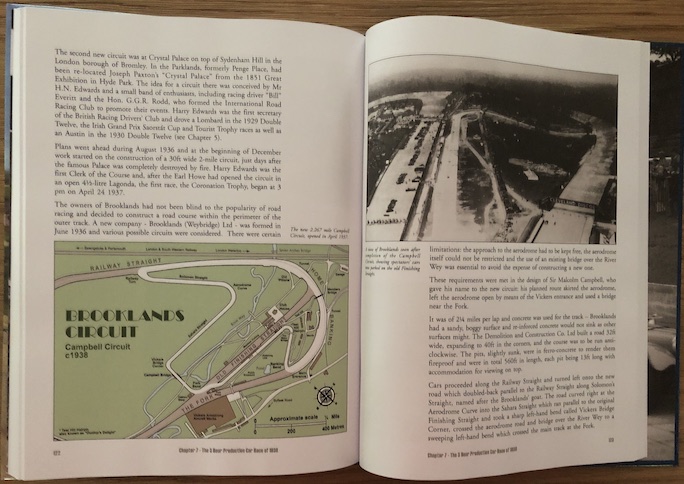 In addition to the specially commissioned cover illustration by John Pulford (Head of Collections and Interpretation at Brooklands) the book includes several circuit plans in color showing the 1927 and 1937 layouts. Importantly, they are to scale and even include buildings and connecting/service roads, the detail being derived from period sources such as Ordnance Survey references, aerial photos, and eyewitness accounts.

The Index, compiled by Marcus Potts who designed the book and also created the circuit plans, really is remarkable enough to warrant praise. Provided are the full names (as well as date of birth and, as applicable, death; also noms de plume), of drivers, engineers, designers, mechanics, and other relevant persons. Potts didn’t just scour the existing literature to compile this but researched genealogical records and War Office archives; the details as published here represent a new high mark. Appended are race results by year and, within that, class (below). 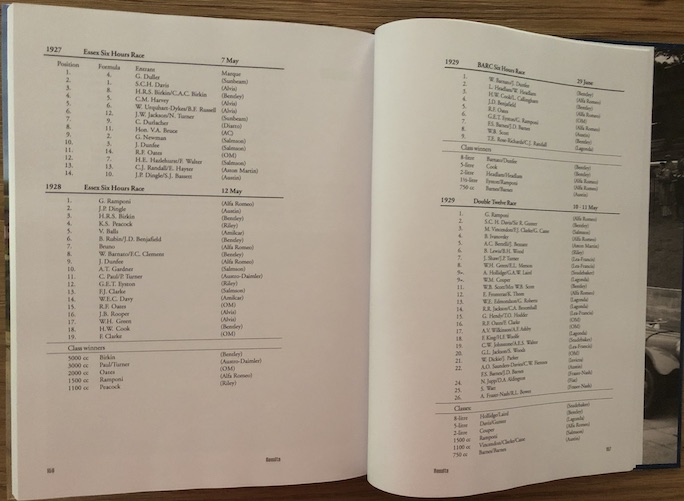 There are at least two typesetting choices that are unfortunate, especially for the cohort old enough to be this book’s greatest fans: the Index, though superlatively detailed, is in microscopically small type (5 pts?) and throughout the book the running feet are set in sans serif bold with really tight tracking and, worse, in grey, rendering the folios hard to make out. Another peculiarity, albeit inconsequential in practical terms, is that the closing chapter that presents marques that offer/ed specially designated Brooklands models (below) lists them in no discernible order (alpha, or year): cf. Austin, Riley, Gwynne, Bentley etc. There are only 8 (plus 4 “others”) so this is not too much of an impediment. 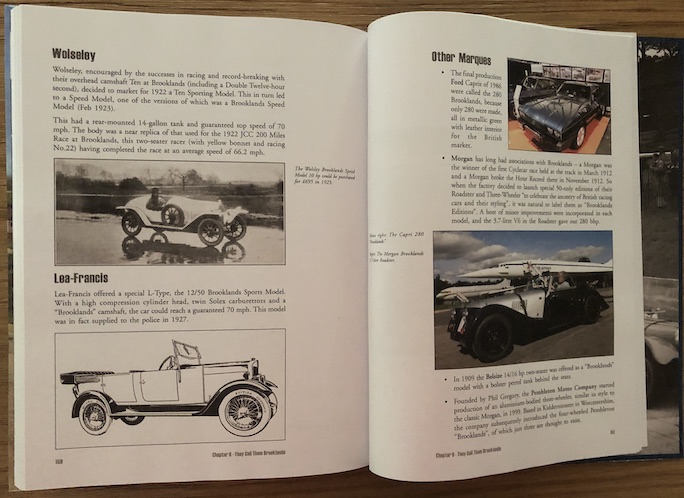 A Morgan and a Concorde? Who built the Concorde? Vickers. Where did Vickers set up shop?

Non-UK readers may benefit from knowing that the publisher, Chaters Booksellers Limited, is owned by the now third generation of the Stroud family behind that veritable British institution.

Small though it may be, this meticulously made book has seriously import.

* What makes this reference murky is that among Boddy’s many books there is none with that exact title so Winn is probably referring to Boddy’s body of work, which includes such standards as Brooklands: The Complete Motor Racing History of 2001 that was based on The History of Brooklands Motor Course 1906–1940 from 1957 and 1979. Blumlein’s book includes no Bibliography; otherwise someone would have surely clarified this statement.