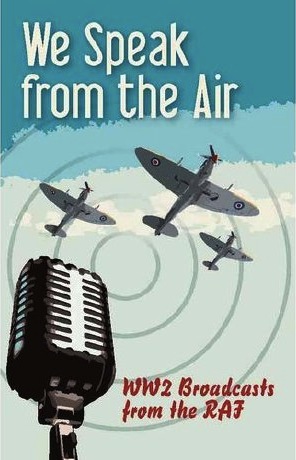 by the Ministry of Information

By 1943 the British Ministry of Information, on behalf of the Air Ministry, had published two books for public consumption dealing with the ongoing air war in Europe and North Africa. The first was titled We Speak from the Air and the second Over To You. They were both compilations distilled from approximately 1,200 radio broadcasts made by Royal Air Force servicemen. Both books have been combined in this edition.

The 53 stories included here for publication are generally all two to four pages long. The longest, at six pages and somewhat typical of all the stories, is “Three Men in the Mediterranean.” In their own words, the surviving aircrew tell about flying out of Malta and getting shot down when flack pierces their fuel tank on their twentieth mission. The pilot, observer and gunner all relate their parts of the story of getting hit and ditching their bomber at sea. They escape the sinking plane and are eventually rescued by a British submarine.

Within the first We Speak from the Air section of the book, a U-boat is captured by a Hudson reconnaissance bomber, a fighter pilot tells about shooting down three German planes on his first day of action, and the sergeant pilot of a Wellington bomber attacked by a Messerschmitt 110 kicks holes into the fabric of his airplane so he can crawl outside to put out a fire in the wing while flying back across the Channel. In the second half of the book, the stories are grouped under chapter headings titled “The Fateful Summer,” “Fighters Up!,” “Hunting The Hunters,” “Ordeal By Water,” “Training In Canada,” “Bombs Away!” and “Wings Across Africa.”

The stories in the first section were published by the Ministry of Information in 1942 and reflect a need for bravado early in the war. Popular slang terms like “a party,” “a rough house,” “the show,” “Huns,” and occupying “a front seat in the stalls throughout the performance” are used to describe deadly action.

The second collection of stories, published in 1943, are more realistic emotionally and reflect a hard fight, with victory looking possible but not yet assured. No more whistling through the graveyard. Dunkirk was now “a huge column of black smoke rising straight up to 15,000 feet hardly moving in the still morning.” The terror and confusion of combat was more open for discussion. “Often at the height of the blitz, when we returned we could not remember what on earth had happened, not even what we had fired at.” One Spitfire pilot tells of making violent evasive maneuvers “trying to get away from no one at all” when he mistakes his own tracers for those being fired by a German trying to shoot him down from behind. The first set of stories seem slightly guarded in the retelling; the second set are more natural and open.

Toward the end of the collection the stories move away from the air war over France and Germany, to Italy and the North African coast. The last story of the collection tells about a bomber crew crashing in the desert 40 miles east of Benghazi and hiking 280 miles to safety with the help of Arab tribesmen. A quote from that story perhaps sums up the general attitude of those swept up in the maelstrom of WWII combat. “However bad things are, I believe one’s always surprised at the time that they’re not worse. . . . Now it’s over, I’m glad it all happened.” These sentiments echo Shakespeare’s Henry V addressing his troops prior to battle: “And gentlemen in England now-a-bed shall think themselves accurs’d they were not here, and hold their manhoods cheap while any speaks that fought with us upon Saint Crispin’s day.”

The book opens with a Publisher’s Note explaining where the radio broadcast transcriptions originated, followed by We Speak From The Air comprised of 23 stories. After that, Over To You immediately starts with 30 more first-person combat adventures. No index.

Design Between the Lines »
« Fireship: The Terror Weapon of the Age of Sail