The Alphabet and The Automobile 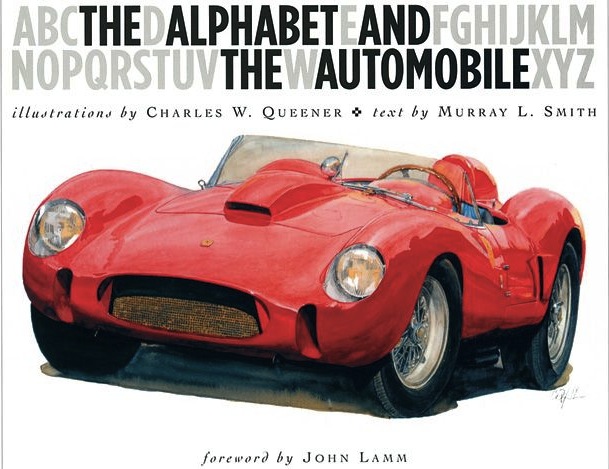 Typically A-B-C books are for little kids. It is obvious at first glance, however, that The Alphabet and The Automobile wasn’t intended for those lively little minds with short attention spans. Those kiddos are captivated by A is for aardvark and a Blue Train for B is likely to elicit a squeal of “Oh, show me Thomas the Tank!”

But right there on the same page where all the “legal” stuff is (like the ISBN and copyright info, etc) we gain enlightenment courtesy co-author/illustrator Chuck Queener. He explains the artwork in the book came, for the most part, “from a series…I originally created 1996-2000 for (co-author) Murray Smith’s Louis Vuitton Classic at Rockefeller Center in NYC. Seeing the interest my grandsons took in looking at these pieces (prompted) their mother to suggest an alphabet book.”

Queener’s brush strokes do more than merely put watercolor to paper—they sing, they talk—and others recognize this too for his paintings hang in some pretty prestigious collections. He’s well steeped in all-things automotive having raced for a short time, and instructed others to drive competitively as a Jim Russell Racing School instructor. Before moving east, as he describes it, he “got involved with the Ferrari Owner’s Club and this evolved into my founding Cavallino”. Plus he’s held staff positions at publications like Road & Track, Motor Trend, and Ski. There’s more, but you get the idea.

Co-conspirator in the creation of this book, Murray Smith, founded the aforementioned Louis Vuitton Concours and he’s also collected cars, managed race teams, developed race cars and been an ad agency exec. His words accompany each of the Queener-created paintings and read much as though we were listening to the “man with the microphone” narrating a concours showfield—complete with a slip as my fellow SpeedReaders.info reviewer Sabu Advani pointed out in an email he sent me. Just as details sometimes get lost or tangled when coping with events unfolding on a showfield, somehow Smith and Queener neglected to acknowledge the car in Queener’s painting is not the Speed Six Bentley with which Barnato raced the Blue Train.

That aside, this modest volume features Chuck Queener’s gorgeous illustrations, at least two per page, A to Z. And typical of David Bull-published books, it’s beautifully printed—this in landscape format (which just seems so very logical given the shapes of the subject matter) and hardbound. So A is for Austin and Alfa, K for Kurtis, Miller, Maserati and others for M—you can discover for yourself what vehicles represent Q and X.

This brings us back to imagining who might enjoy this book. We don’t know the ages of Queener’s grandsons when they were so taken with their grandpa’s artwork. It’s easy to imagine a youngster, already fascinated by “all things car” gravitating to it. The book would make a sweet gift for such a youngster or teen who would likely feel very special indeed to be gifted with such a seemingly grown-up gift—that is, of course, provided you can relinquish it after you’ve looked at it yourself. After all, aren’t you curious what cars represent Q, or X, or even Y?

The Spirit of Competition »
« Transatlantic Airships: An Illustrated History